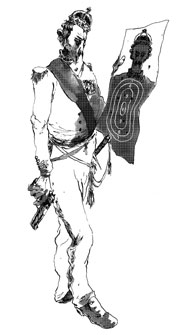 “ALL political lives, unless they are cut off in midstream at a happy juncture, end in failure,” wrote Enoch Powell, the controversial but often perspicacious British politician, “because that is the nature of politics and of human affairs.” But the political lives of tyrants play out human affairs with a special intensity: the death of a democratic leader long after his retirement is a private matter, but the death of a tyrant is always a political act that reflects the character of his power. If a tyrant dies peacefully in bed in the full resplendence of his rule, his death is a theater of that power; if a tyrant is executed while crying for mercy in the dust, then that, too, is a reflection of the nature of a fallen regime and the reaction of an oppressed people.

This was never truer than in the death, last week, of Col. Muammar el-Qaddafi. The only difference between his death and those of so many other tyrants across history was that it was filmed with mobile phones, a facility unavailable to contemporaries of, say, the Roman emperor Caligula.

Despite brandished phones and pistols, there was something Biblical in the wild scene, as elemental as the deaths of King Ahab (“the dogs licked up his blood”) and Queen Jezebel (thrown off a palace balcony). It was certainly not as terrible as the death of the Byzantine emperor Andronicus I, who was beaten and dismembered, his hair and teeth pulled out by the mob, his handsome face burned with boiling water. In modern times, it was more frenzied than the semi-formal execution, in 1989, of the Romanian dictator Nicolae Ceausescu, but not as terrible as the ghastly lynching, in 1958, of the innocent King Faisal II of Iraq (age 23) and his hated uncle, who were supposedly impaled and dismembered, their heads used as soccer balls. In 1996, the pro-Soviet former president of Afghanistan, Najibullah, was castrated, dragged through the streets and hanged.

Western leaders and intellectuals find Colonel Qaddafi’s lynching distasteful — Bernard-Henri Lévy worried it would “pollute the essential morality of an insurrection” — yet there are sound political reasons for the public culling of the self-proclaimed king of kings. Colonel Qaddafi’s tyranny was absolutist, monarchical and personal. The problem with such dictatorships is that as long as the tyrant lives, he reigns and terrorizes. As Churchill put it, “dictators ride to and fro upon tigers from which they dare not dismount.”

Only death can end both the spell to bewitch and the prerogative to dominate — and sometimes, not even death can snuff out power. “The terror inspired by Caligula’s reign,” wrote Suetonius, “could be judged by the sequel.” Romans were so terrified of the emperor that it was not enough to assassinate him. They wanted to see him dead: fearing it was a trick and lacking cellphone footage, they had to be convinced. The mile-long line of Libyans who were keen to see Colonel Qaddafi’s cadaver in its shop-refrigerator-tomb would understand this perfectly.

When Catherine the Great overthrew her husband, Peter III, in 1762, she knew that if anything happened to him, she would be blamed. Yet her entourage, led by her lover, Grigory Orlov, realized that as long as he lived, he remained the legitimate autocrat: they strangled him. His body was displayed to prove that he was dead, but nonetheless, Peter III impostors tormented Catherine for the rest of her life. Henry IV experienced similar troubles after the death of Richard II; a host of pretenders haunted the usurper.

But such comebacks may be history: the cellphone videos, which show Colonel Qaddafi being beaten, and later, the bullet holes in his dead body, rob his last followers of the mystique necessary to lead an insurgency in his name, charged with all the excitement of a (Saddam Hussein-style) heroic leader on the run. His preposterously exuberant cult of personality was surely shattered by the spectacle of his pathetic demolition.

Sometimes the killing of tyrants is specially designed to echo the leader’s vices. Shajar al-Durr, an Egyptian sultan’s widow who became (uniquely in Muslim history) a sultan in her own right, was notorious for her extravagance. When she murdered her new husband in 1257, his concubines beat her to death with her own clogs — both a sign of Arab contempt and the medieval equivalent of death by stiletto. It was said that Edward II, notorious for homosexual relationships with his favorites, was killed with a red-hot poker. The upside-down suspension of the dead Mussolini with his mistress in a town square signaled the end of his pretensions to Caesarian heroism and Casanovan machismo.

For someone who so thrived in the age of television, an impresario of many a circus of public violence, Colonel Qaddafi faced an entirely fitting end. When he asked his frenzied killers, who had known no other ruler in their lives, “Do you not know the difference between right and wrong?” he had already taught them the answer. We may call this auto-tyrannicide. The manically terrifying but ruthlessly brilliant Mamluk sultan Baibars I, was more literally a victim: according to some accounts, he regularly poisoned his guests until, in 1277, he absentmindedly downed a glass of poisoned fermented camel’s milk himself. During the Crusades, the Atabeg of Mosul and Aleppo (in today’s Iraq and part of Syria), Zangi, who liked to castrate the children of enemies, and possibly his boy lovers as well, was supposedly stabbed in his bed by one of those humiliated eunuchs. When Stalin suffered a stroke in 1953, he had recently arrested dozens of doctors for treason. He lay in his own urine for more than 12 hours before his henchmen dared to call a doctor. He was not murdered — like Colonel Qaddafi, he was the author of his own destruction.

There is no greater achievement for the tyrant — short of immortality — than to die in his own bed. He must control the time, place and consequence of death. This is possible with a gradual illness. “Now Herod’s sickness greatly increased upon him ... God’s judgment upon him for his sins,” wrote Josephus about the king of Judea. “His entrails had ulcers ... an aqueous and transparent liquor had settled itself around his feet and the bottom of his belly. His genitals were rotting and gave birth to worms.” Yet the suppurating Herod managed to kill one rebellious son and arrange the succession of three more before succumbing.

Unlike monarchs, who pass power to their heirs at the moment of death to ensure the survival of the regime, tyrants must simply survive as long as possible. Hence inhumane struggles by indefatigable doctors to keep ailing dictators — Chairman Mao, Leonid I. Brezhnev, Marshal Tito, General Franco — alive. Only the ingenious North Koreans have solved this problem by declaring Kim Il-sung immortal, perpetual president.

The courtiers of modern tyrants have sought to avoid the inconvenience of death by creating new hereditary monarchies. Outside the Arab world, the Kims of North Korea, Kadyrovs of Chechnya, Kabilas of Congo and Aliyevs of Azerbaijan all achieved this dictator’s dream. Few in the Arab world have done the same. Hafez al-Assad of Syria, who ruled from 1970, died in his bed in 2000, passing the presidency to his son Bashar. Colonel Qaddafi, Mr. Mubarak and Mr. Hussein all dreamed of it. But the spoiled heirs of such hereditary tyrannies usually lack the talent of their fathers.

ALL tyrannies are virtuoso displays over many years of cunning, risk-taking, terror, delusion, narcissism, showmanship and charm, distilled into a spectacle of total personal control. Tyrants are the greatest of all actor-managers — omnipotent impresarios. They will last only as long as prestige, prosperity and a vestige of justice are maintained. Uninhibited bloodletting can also work — as Bashar al-Assad and Iran’s supreme leader, Ayatollah Ali Khamenei, have demonstrated — until luck eventually runs out in the shape of treason, outside interference or a tsunami of rebellion like the Arab Spring. It is hard to imagine that there would be anything but giblets left if those two now fell into the hands of their people.

If a tyrant cannot die in his own bed, the best he can do is try to stage manage his downfall, because such characters find it unthinkable to exist without ruling. Colonel Qaddafi, like many others, was so narcissistic that he first denied the fact of the revolution before embracing his own reckless, heroic role, the drama of the last stand: “I have set my life upon a cast,” says Shakespeare’s Richard III, “and I will stand the hazard of the die.” Colonel Qaddafi could have saved his family and thousands of lives by retiring to a villa and later facing the International Criminal Court. Yet the narcissist envisages his downfall only as a mise-en-scène featuring his followers, family and country, consumed in his bonfire of egomaniacal nihilism. Colonel Qaddafi must have planned to die in battle like Richard III and Macbeth, or to kill himself. Yet this monstrous poseur totally bungled his own death.

The master class in the death of tyrants was given by Hitler who, even as Russian legions fought their way into Berlin, kept control long enough to plan and execute his testament, marriage and suicide: control to the end in a kerosene-fueled garden Götterdämmerung. But not even he achieved the brilliant dignity of the death of Charles I, denounced as a “man of blood” by his Puritan tormentors, whose grace before execution set a standard that Colonel Qaddafi could only dream of: “I am a martyr of the people,” he said before facing the ax. “I go from a corruptible to an incorruptible crown where no disturbance can be, no disturbance in the world.”