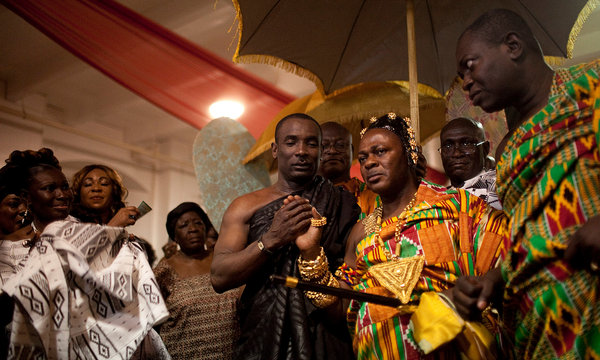 Nana Acheampong-Tieku appeared in kente cloth and crown after being sworn in as the Ashanti chief of metropolitan New York during the first night of a two-day ceremony in the Bronx last month. More Photos » 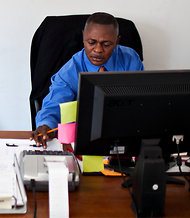 Mr. Acheampong-Tieku, who goes by Michael in his civilian life, works in the Bronx as an accountant. More Photos »

A scrum of men formed at one end of the hall and hoisted to their shoulders a wooden litter. It bore the newly inaugurated chief, wearing gold jewelry and a gold-studded leather crown, who bobbed above the celebrants and flicked a horsetail whisk and a golden scarf in a studied regality.

And so, just before dawn the last Sunday in May, one of the most elaborate rituals in immigrant New York reached its apogee. The man at the center was Nana Acheampong-Tieku of the Bronx, New York regional chief of the Ashanti people from Ghana in West Africa.

The inauguration was part of a quadrennial, two-day ceremony in the Bronx that is a high point in the Ashanti diaspora’s calendar, serving to strengthen traditions and community ties in New York. “This is gorgeous, this makes me happy,” said Kojo Ampah Sahara, a community leader who helped organize the event. “This is who we are.”

Nominated by a 10-member council of regional Ashanti elders, and voted on by community members, the regional chief has a range of ceremonial and practical duties. He mediates familial and business disputes, including fractured marriages, before they reach the courts. He helps Ghanaian immigrants find employment, lodging, medical care and legal help.

He also leads a fund-raising effort for scholarships and for a children’s hospital in Ghana among New York’s growing Ghanaian population, the largest African immigrant group in the city, which numbers more than 22,000, up from about 14,900 in 2000, according to the Census Bureau.

Mr. Acheampong-Tieku’s most pressing challenge, however, is the survival of his very organization. He serves under the aegis of the Asanteman Association of U.S.A., an Ashanti cultural group formed in 1982. But even as the population of Ghanaians and their subgroups has grown in the New York region, the association’s membership has plummeted. It has about 70 dues-paying members, down from about 1,000 in the 1990s.

Many of the association’s original members, most of them immigrants, have moved back to Ghana or died, but they have not been replaced by their assimilated, American-born offspring or newly arrived Ghanaians. This is a pattern familiar to many immigrant diasporas: Organizations formed by early waves of immigrants struggle to remain relevant as the needs and desires of later generations and more recent newcomers shift.

Nana Kofi Appiah, 74, who helped create the organization, said none of his five children living in the United States were interested in taking part.

“They are more American than Ghanaian,” he said. “They think it’s an old person’s organization.”

Mr. Acheampong-Tieku, 52, has felt this tension in his own home. He has four children, but only one — Vera, 20 — has decided to participate in the association’s activities, and only after being lobbied by Mr. Ampah Sahara. At 34, Mr. Ampah Sahara is one of the youngest members of the group and is trying to use his relative youth to attract young Ghanaians and Ghanaian-Americans to the organization.

“They think we are stuck in the past,” Mr. Ampah Sahara said. “They think once we are here, we should move on.”

Low membership, in fact, almost scuttled the ceremony. Mr. Acheampong-Tieku was elected chief in December 2010 and, according to tradition, he should have been sworn in within six months. But the association had little money, and the budget for the two-day ceremony was about $25,000, including airfare and accommodations for a high-ranking chief from Ghana and his entourage.

It took more than a year for Mr. Acheampong-Tieku, as the chief designated by the association, to raise enough money.

Mr. Acheampong-Tieku was interviewed before the ceremony in an undecorated office where he works as an accountant for a firm that provides services to developmentally disabled young adults. The office is in an unmarked building facing Interstate 95, on a semi-industrial patch of the Bronx. (In his civilian life, he uses the given name Michael. Nana is an honorific accorded to tribal chiefs.)

“What we want is unity, to bring ourselves together and help the needy people,” he said.

Throughout the week, chiefs and prominent Ashantis from around the United States and abroad arrived in New York, including Nana Adusei Atwenewa Ampem I, an Ashanti chief and foreign minister of the court of Otumfuo Nana Osei Tutu II, king of the Ashanti empire, based in Kumasi, Ghana. Mr. Atwenewa Ampem stayed at a Marriott Hotel in Yonkers, where he received a stream of acolytes and Ashanti royalty.

“Why are we here?” Mr. Atwenewa Ampem asked rhetorically in an interview in a third-floor suite. He wore an elegant white robe and sipped Hennessey.

“The king,” he explained. “is very keen to bring the Ashanti community together in every country and, second, to come and support them.”

The event consists of two consecutive nights of ceremony; the first is the inauguration, and the second celebrates the first. On a Saturday late last month, the day of his inauguration, Mr. Acheampong-Tieku spent the day racing around the Bronx, greeting tribal elders and briefing them on the ceremony and news from the local Ashanti population. The inaugural ceremony was held in an all-purpose room at a Roman Catholic church in the Tremont section of the Bronx.

Chiffon bunting in the colors of the Ghanaian flag — green, yellow, red and black — hung from the ceiling. Hundreds of folding chairs arrayed in long rows on each side of the room formed a wide alley down the middle. At the far end was a wooden thronelike seat for the king’s delegate.

Amid thundering drums, delegation after delegation made grand entrances, shaking hands and taking their seats. At 12:45 a.m., two hours behind schedule, Mr. Atwenewa Ampem, surrounded by a large retinue and backed by his own percussionists, swept into the hall. “Very powerful,” said a church security guard who was looking on. “You can tell they’ve been doing this a long time.”

And the event had only just begun. There were several more hours of music and dance, ritual and ceremony until 4:30 a.m. The second-night party was yet to come, but the Ashanti population of New York had a new chief.