Program gets push even as critics question its fairness 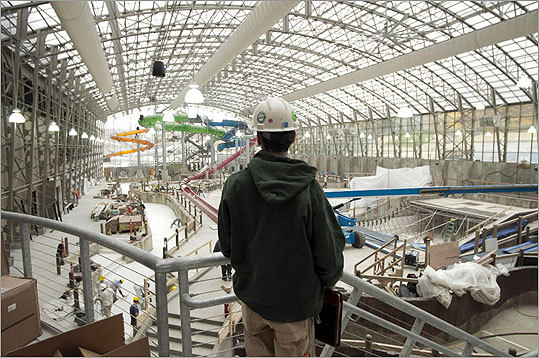 (Caleb Kenna for The Boston Globe) Jay Peak Resort owner Bill Stenger has developed
a year-round attraction that will include a water park.
By Maria Sacchetti Globe Staff

JAY, Vt. - Birinder Bhullar had grown weary of the long business trips between his native India and the United States, so he decided to make his home in New York. But the white-haired former engineer soon realized that he would have to wait years for a visa to move to America. 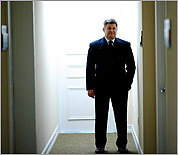 (Brian Blanco for The Boston Globe) Anthony Korda, an
early participant who brought his family from England, said
the system helps both works and investors.

Instead, Bhullar and hundreds of other wealthy immigrants found a faster way into the United States, through a ski resort in Vermont. In exchange for investing $500,000 in the resort to create jobs, the US government gave him a green card three months ago.

The 55-year-old businessman is among 450 investors from India, China, Russia, South Africa, and dozens of other countries who obtained the green cards through their investments in Jay Peak Resort, part of a controversial national program that the Obama administration is increasingly promoting in hope of creating thousands of jobs across the United States.

“I chose the investor route because it was simple and much faster,’’ said Bhullar, now a mystic in New York offering seminars in life guidance. “I could see that it would be a waste of time - it would take very long - if I chose any other option other than Jay Peak.’’

The immigrant investor program, created in 1990 by Congress to compete with a similar initiative in Canada, helps foreigners slash through the red tape in the US immigration system while allowing businesses such as Jay Peak Resort to raise the money they need to expand.

With job creation now a top political issue and traditional sources of capital hard to find, the program is being aggressively marketed to businesses and potential foreign investors. It has incited critics who condemn it as a questionable business practice or as an immigration policy that effectively allows some foreigners to buy their way into the country.

But it has also created jobs in places like Jay, a tiny town 3 miles from the Canadian border in a county with one of the highest unemployment rates in Vermont. Every spring, the resort’s owner, Bill Stenger, would have to lay off workers. But through the program, he has raised $200 million in the past few years to transform a modest ski resort into a glitzy year-round attraction with an ice rink, golf course, two hotels, and an indoor water park.

Most important, he said, they plan to have 800 full-time, year-round jobs, up from just 150 five years ago.

“Everywhere you look there are people working,’’ Stenger said as he walked through the water park one recent day. He added, “I honestly don’t know that there would have been another way to do it, especially at the time we’re in now.’’

Some critics say they fear that immigrants will pay little attention to their investments because they are motivated by green cards.

“This is basically selling green cards,’’ said Daniel Foty, who owns a technology consulting business in northern Vermont. “There are limits, at least in my opinion, to what they should do for money.’’

US officials say they audit the program and demand business plans and job projections up front.

It takes about eight months for the government to issue visas to immigrants and their immediate relatives. The immigrants then receive conditional green cards that become permanent after two years if jobs materialize. After five years, the immigrants could apply for US citizenship.

Immigrants whose ventures fail could lose their money and be deported, but US officials say interest in the program is soaring: About 3,300 people applied for visas last fiscal year, triple the number in 2009, according to Citizenship and Immigration Services, the Homeland Security agency that runs the program.

The 41,000 jobs created under the program since 1990 is a tiny fraction of the US economy, but at a time of desperation to show job growth, officials see the program as a way to help.

“Frankly we have really focused a lot of attention on this program,’’ Alejandro Mayorkas, the agency’s director, said, adding that the agency has taken steps in recent months to expedite processing and increase communication with applicants. “This is a program that is designed to create jobs for US workers, and in these economic times, the value of that cannot be overstated.’’

Most immigrants participating in the program invest through a US government-approved list of investment pools that can provide capital to a number of business enterprises. The list has exploded from 11 pools four years ago to 179 now.

The only Massachusetts investment pool launched its first project in the spring, refurbishing a New Bedford building into offices to create at least 80 jobs. The group is also courting investors in China for a battery manufacturing plant possibly for Boston, said John Downey, a lawyer and president of the pool. New Hampshire also has an investment group that won federal approval last month for a project to build lodging and other amenities at Ragged Mountain ski area.

In Jay, a town of 500 people with a country store, a gas station, an auto shop, and not much else, the immigrant investor program is transforming the largest employer in town into a year-round enterprise.

Some worry that the explosive development will change the town’s quiet character. A sign in the country store reads: “Welcome to Jay. Don’t forget to leave.’’

But others in this mostly white, conservative, blue-collar town are grateful for the work, even if they are unsure about the program.

Michael Witkowski, 23, an electrician, was stuck working the midnight shift as a gas station clerk in Connecticut until he found a job at Jay Peak.

“I think it’s a little bit sketchy that you can buy your way into the country like that, but at the same time they’re giving me a job, so I can’t really complain,’’ Witkowski said with a shrug. “That’s what it all boils down to.’’

Anthony Korda, a lawyer and early investor who brought his wife and two children from England in 2007 and lives in Florida, said the program is helping both groups, workers and investors.

One day this month, the need for work was vividly on display at a job fair at Jay Peak Resort. Dozens of people, some with children, poured into a hall to fill out applications for jobs as janitors, cooks, and clerks.

“There is a very, very strong need for work up here; we’re crying for it right now,’’ said Karen Crowe, 60, a janitor from East Charleston laid off two years ago. “You can hardly find a job up here. You’re very lucky if you do.’’

(Brian Blanco for The Boston Globe) Anthony Korda, an
early participant who brought his family from England, said
the system helps both works and investors.