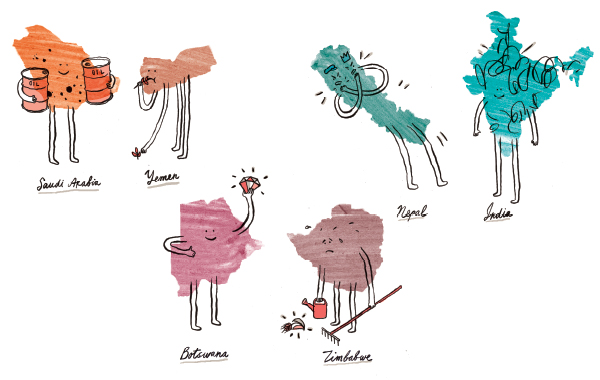 1. For centuries, economists have been trying to figure out why nations fail.

For centuries, economists and intellectuals have been compelled to explain why some nations fail. Here are their theories and the holes in the arguments.

Over the centuries, proposed answers have varied greatly. Smith declared that the difference between wealth and poverty resulted from the relative freedom of the markets; Thomas Malthus said poverty comes from overpopulation; and John Maynard Keynes claimed it was a byproduct of a lack of technocrats. (Of course, everyone knows that politicians love listening to wonky bureaucrats!) Jeffrey Sachs, one of the world’s most famous economists, asserts that poor soil, lack of navigable rivers and tropical diseases are, in part, to blame. Others point to culture, geography, climate, colonization and military might. The list goes on.

But through a series of legendary — and somewhat controversial — academic papers published over the past decade, Acemoglu has persuasively challenged many of the previous theories. (If poverty were primarily the result of geography, say, or an unfortunate history, how can we account for the successes of Botswana, Costa Rica or Thailand?) Now, in their new book, “Why Nations Fail,” Acemoglu and his collaborator, James Robinson, argue that the wealth of a country is most closely correlated with the degree to which the average person shares in the overall growth of its economy. It’s an idea that was first raised by Smith but was then largely ignored for centuries as economics became focused on theoretical models of ideal economies rather than the not-at-all-ideal problems of real nations.

Consider Acemoglu’s idea from the perspective of a poor farmer. In parts of modern sub-Saharan Africa, as was true in medieval Europe or the antebellum South, the people who work the fields lack any incentive to improve their yield because any surplus is taken by the wealthy elite. This mind-set changes only when farmers are given strong property rights and discover that they can profit from extra production. In 1978, China began allowing farmers to benefit from any surplus they produced. The decision, most economists agree, helped spark the country’s astounding growth.

According to Acemoglu’s thesis, when a nation’s institutions prevent the poor from profiting from their work, no amount of disease eradication, good economic advice or foreign aid seems to help. I observed this firsthand when I visited a group of Haitian mango farmers a few years ago. Each farmer had no more than one or two mango trees, even though their land lay along a river that could irrigate their fields and support hundreds of trees. So why didn’t they install irrigation pipes? Were they ignorant, indifferent? In fact, they were quite savvy and lived in a region teeming with well-intended foreign-aid programs. But these farmers also knew that nobody in their village had clear title to the land they farmed. If they suddenly grew a few hundred mango trees, it was likely that a well-connected member of the elite would show up and claim their land and its spoils. What was the point?

I encountered another side of Acemoglu’s thesis during what must have been one of history’s great natural economic experiments: post-Saddam Hussein Baghdad. On April 9, 2003, the day the city was captured, one of the world’s most tightly controlled economies suddenly became a free-for-all. Amid the chaos, many former state functionaries turned into entrepreneurs. Nearly every engineer from the ministry of housing, it seemed, had opened his own construction company. Satellite TVs, once illegal to all but a very small elite, were sold on every major street. Under Hussein, only one company (widely rumored to be monitored by the intelligence service) offered Internet access, and it was incredibly bad and expensive. After it was gone, there were so many new Internet companies that I had far more access options then than I do today in Brooklyn.

Yet the American authorities, who had not planned for this budding free market, all but destroyed it when they gave the bulk of new contracts to large companies outside the country. Often, these outsiders subcontracted to Iraqi firms with close ties to the state’s new political establishment. By the anniversary of the United States invasion, it was clear that economic success would again come from connections and corruption rather than talent and hard work. Today, Transparency International ranks Iraq as one of the most corrupt nations on earth. An Iraqi friend once told me that he had hoped we would teach the Iraqis how to be Americans. Instead, the Americans learned how to be Iraqi.

Acemoglu, Robinson and their collaborators did not come up with the idea that incentives matter, of course, nor the notion that politics play a role in economic development. Their great contribution has been a series of clever historical studies that persuasively argue that the cheesiest of slogans is actually correct: the true value of a nation is its people. If national institutions give even their poorest and least educated citizens some shot at improving their own lives — through property rights, a reliable judicial system or access to markets — those citizens will do what it takes to make themselves and their country richer. This suggests, among other things, that instead of supporting one-off programs promoting health or agricultural productivity, the international community should focus its aid efforts on deep political and economic change.

Perhaps just as interesting, “Why Nations Fail” also shows the effects of different economic and political systems over the centuries. The sections on ancient Rome and medieval Venice are particularly compelling, because they show how fairly open and prosperous societies can revert to closed and impoverished autocracies. It’s hard to read these sections without thinking about the present-day United States, where economic inequality has grown substantially over the past few decades. Is the 1 percent emerging as a wealth-stripping, poverty-inducing elite?

Well, maybe. Acemoglu and Robinson’s frequent collaborator Simon Johnson, the former chief economist at the International Monetary Fund, told me that financial firms have so thoroughly co-opted the political proc­ess that the American economy has become fundamentally unsound. “It’s bad and getting worse,” he told me. Barring some major shift in our political system, he suggested, the United States could be on its way to serious economic failure.

Charles Calomiris, an economist at Columbia University, is less worried. But it’s not because he thinks that banks haven’t co-opted our political system. “We’ve never had a good banking system,” he says. “What’s amazing about America is that we’ve been the most successful economy in the world while being crippled by political constraints on the quality of our banking system.” This has been going on since the 1700s, Calomiris says, and he doesn’t see any reason for the United States’ economy to stop growing anytime soon.

Acemoglu and Robinson are on the pessimistic side of optimism about the United States’ chances of a resurgence. Congress, they told me, is too heavily influenced by the wealthy, and the advent of super PACs has only given elites more power. Yet Acemoglu surprised me when he said he was encouraged by the rise of the Tea Party and Occupy Wall Street. While neither has an especially coherent or subtle economic agenda, both show that, however frustrated they might be, large numbers of Americans still believe they can influence the political process to improve their fortunes. Since the future of American economic health lies in its people, Acemoglu explained, as long as Americans believe they can influence the process, they will.

But, he quickly pointed out, what if Americans find their protests have no impact? What if the United States becomes a truly extractive nation, with violent repression of protest or — in some ways, worse — the grudging acquiescence of the beaten-down masses? While many Americans are frustrated by the divisive, often angry public debates over our economic future, we may only be in real trouble at the very moment that they shut up.

Adam Davidson is the co-founder of NPR's Planet Money, a podcast, blog, and radio series heard on “Morning Edition,” “All Things Considered” and “This American Life.”

A version of this article appeared in print on March 18, 2012, on page MM16 of the Sunday Magazine with the headline: Why Some Countries Go Bust.