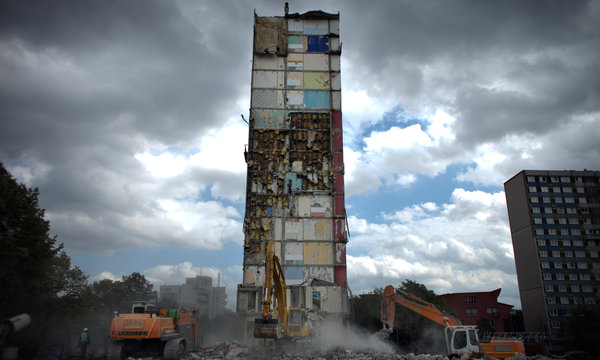 The Balzac is to be replaced by a cluster of smaller units in a poor neighborhood called the “4000." 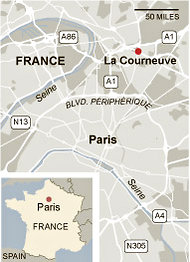 Six years later, the drugs and violence have not gone from this neighborhood, called the “4000,” a massive gray complex of housing projects that have for decades been an emblem of the troubles of France’s poor suburbs.

Balzac has now been emptied, though, and a spidery mechanical arm tears away at it each day. The towering wall of stained concrete and tile, once 600 feet long and 16 stories high, is to be replaced by a cluster of smaller units, part of a $60 billion nationwide plan to refurbish France’s roughest neighborhoods.

It is hardly the first time such efforts have come to the 4000. Governments have been razing and rebuilding in this neighborhood for 25 years, hopeful that new architecture and new theories about how best to house the poor will solve the problems here. Residents and local officials, though, have few expectations that new walls and fresh pavement, whatever their configuration, can drive a deeper renewal.

“They’re not building shopping centers, they’re not creating jobs for young people,” said Soraya, 42, who was raised in Balzac and now lives nearby, requesting that her last name be withheld for fear of retribution by local thugs. “This will solve none of our problems.”

Balzac will be the fifth tower she has seen fall. Her current residence sits on what was once the site of the Renoir tower, destroyed in 2000. Ravel and Presov came down in 2004. A first tower, Debussy, was dynamited in 1986; the event was broadcast on national television and heralded as the start of a broad urban renewal.

Erected in the 1960s, the 4000 was meant as a utopia, an experiment in social engineering that would rationalize the lives of the immigrant workers it would house.

The theory of the day, drawing on the architectural philosophy of Le Corbusier, held that residential areas ought to remain separate from roads and the workplace, and so the cluster was built as a sort of island; residents trudged across a muddy field to reach the adjacent train station. Each airy apartment was equipped with a bathroom, a relative rarity in Paris at the time. The complex was deemed revolutionary.

Government after government has since pledged to undo the damage they say these structures have done. In 1973, an official directive halted the construction of such housing clusters, deploring their “homogeneity” and “monotony,” and the “social segregation” they imposed.

And yet, while the particular philosophy underlying the 4000 has been disavowed, few French officials have jettisoned a belief in the primacy of architecture in shaping social outcomes, said Marie-Christine Vatov, the editor in chief at Innovapresse, a media group specializing in architecture and urban planning.

“Mixing” and “openness” have replaced “separation” and “uniformity” as the watchwords of the day. But the central lesson of the past decades, Ms. Vatov said, has been the error of such faith in the power of architecture.

“It’s not enough to build in a certain way,” she said, especially without more pointed efforts to improve education and employment.

There are political considerations, too. Buildings, thrown up or torn down, are visible markers of action, Ms. Vatov noted.

Balzac was once a “magnificent” and “convivial” place, said Soraya, the former resident, where neighbors left their doors open and competed to outdo one another with balcony flower arrangements.

But it fell into disrepair within a decade. Built cheaply, the units leaked and crumbled. More recently, the elevators seldom ran. The rats moved in.

Youth unemployment in the "4000" hovers near 40 percent, twice the average.

When the building was cordoned off for destruction, the slump-shouldered young men who operated there simply relocated to nearby buildings, residents and local officials say.

La Courneuve, a city of 37,000, counts only 150 permanent police officers. Local dealers, who once kept the drugs at the edges of the neighborhood out of concern for younger siblings, now recruit schoolchildren as lookouts, residents say.

The banks, the shoe stores, the florist, the fishmonger and the cafe all departed as the area declined. Today, there is a discount supermarket, a butcher, a bakery and little else.

Parents worry about conditions in local schools, as well. Nora, 46, who grew up in Balzac and now lives in a housing unit nearby, has three children under the age of 14.

“There aren’t enough teachers,” she said, seated in her sparse and tidy four-room apartment. “When they don’t come in, no one fills in for them. There are kids who don’t go to school because there’s no one to look after them, so they hang out in the street. And that’s how it is.”

No more than six toddlers are enrolled in a public early education program in La Courneuve, according to Jean-Luc Vienne, the mayoral chief of staff. There are 185 children on the waiting list. Officials also estimate that as much as 10 percent of the city’s adult population does not speak French.

La Courneuve needs more teachers and police officers, Mr. Vienne said. But because education and law enforcement are essentially the domain of the central government, he argued, the city has little power to direct resources to those areas.

There is money for renovation, though. The work at the 4000 is mostly financed by the state and various regional administrations; begun in 2006, it will cost over $400 million, more than five times the city budget.

“We try to take advantage of the urban renovation to deal with the social question,” Mr. Vienne said. Recent rebuilding at the 4000 has included the construction of a school and a work space for local entrepreneurs, for instance, and the refurbishment of a sports complex. Many of the units that will replace Balzac will be more expensive semiprivate residences, a deliberate effort to change the makeup of the population.

The very choice to demolish Balzac speaks to the failure of earlier demolitions to solve the problems here, officials concede. Original plans did not call for Balzac to be torn down, but the drugs had become unmanageable, said Vanessa Fiévet, the urban planner overseeing the project.

The building is being demolished by crane and not dynamite, she added, in part because the police balked at the notion of bringing high explosives into the neighborhood. They feared they might be stolen.

Reprinted from The New York Times, International, of  Wednesday, September 7, 2011.