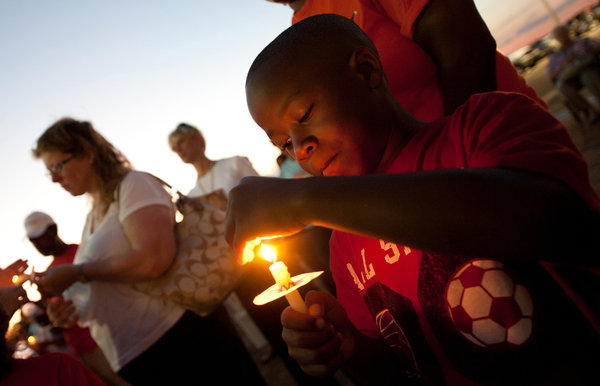 Kylon Williams and others at a vigil for racial unity in Jackson, Miss., where a white teenager is charged in a black man's death.

In a rally for racial unity last week, marchers in Jackson, Miss., honored James C. Anderson, who was run over and killed in June.

But as the case builds — charges against the young man accused of driving the Ford pickup that hit Mr. Anderson were raised to capital murder on Friday, and the F.B.I. is now involved — significant questions remain.

Was the killing of Mr. Anderson premeditated racial violence? An act indicative of a deep cultural divide?

Or was the behavior of Deryl Dedmon, the slight, blond teenager who could be facing the death penalty, simply an anomaly born of anger, alcohol and teenage stupidity, as some close to the case suggest?

Beyond those questions, many here are asking whether Mr. Anderson’s death will prompt a deeper discussion of race relations in a state that has struggled mightily to move beyond its past.

“Racism has always been part of the lifestyle in Mississippi in one form or another,” said Dr. Timothy Summers, 68, a Jackson psychiatrist whose father opened a black-owned savings and loan in Mississippi in the 1950s.

“There still is that component of our culture that very much likes to hold on to how things have been in the past,” he said. “That group, however, doesn’t represent the broader cross section of people who are good and honest but perhaps too naïve, perhaps too quiet, too complacent in looking at racism.”

Although they lived just 15 miles apart and spent Sundays in church, Mr. Anderson, 48, and Mr. Dedmon, 19, could not have led more different lives.

Mr. Dedmon liked his high school agriculture classes, but not as much as he loved hanging out with friends at a drive-in restaurant in the largely white suburban county where he lived, his friends say. He was the joker among a group for whom country music, Bible verses, Bud Light and pickup trucks serve as the cultural markers.

Mr. Anderson was a good country cook, a gifted gardener and always genial, his family said. He liked his job on the assembly line at the Nissan plant north of Jackson, where he had worked for about seven years.

“If you met him, the first thing you were going to see was that grand piano smile,” said his eldest sister, Barbara Anderson Young.

He made a point of taking care of old people and children and was helping his partner of 17 years, James Bradfield, raise the 4-year-old relative for whom Mr. Bradfield has legal guardianship. He sang tenor in the choir at the First Hyde Park Missionary Baptist Church and was so good “he’d have you falling out,” Mr. Bradfield, 44, said.

And if friends or relatives were not dressed well enough for an event, he would tease them into changing into something nicer.

No one is sure why Mr. Anderson was in the parking lot at the Metro Inn at 5 a.m. on June 26. He might have been at a party, Mr. Bradfield said. He was by his truck when two carloads of teenagers pulled off the interstate, according to prosecutors, who cited video from a motel security camera and statements from witnesses. Family members say he might have lost his keys, which have not been returned to them.

The video shows some of the teenagers, who prosecutors said had been at a party earlier that night, running back and forth between their cars and Mr. Anderson. He was beaten repeatedly and robbed, the district attorney said. Items like a cellphone, a ring and his wallet were taken, according to interviews with family members.

Then, one car drove off. But an F-250 pick-up — driven by Mr. Dedmon, the prosecutor said — pulled out of the parking lot and ran over Mr. Anderson as he staggered along the lot’s edge. The murder charge against Mr. Dedmon was raised to capital murder after District Attorney Robert Shuler Smith of Hinds County said he had evidence that Mr. Dedmon had robbed Mr. Anderson.

Why the teenagers drove across the Pearl River to that tough section of Jackson is at the heart of the case, which will be presented to a grand jury in a few weeks as a racially motivated crime, Mr. Smith said. There was no indication that Mr. Anderson’s sexual orientation was a factor in the crime. 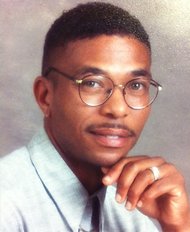 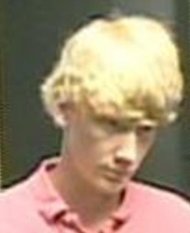 High school students who hang out at the Sonic drive-in on U.S. 80 in Brandon, Miss., say they are not racists.

Morris Dees, founder of the Southern Poverty Law Center, is working with the family and their lawyer, Winston J. Thompson III. Mr. Dees said his group was investigating whether some of the teenagers involved may have loose ties to a gang with white-supremacist leanings. Mr. Smith is taking a more cautious approach.

“I don’t think there are aggressive gangs out there beating up black people,” Mr. Smith said. “I do think because of the political and economic structure and the re-engineering of society, it appears that certain parts of the country and Mississippi feel their culture is under attack.”

The Rev. Brian Richardson of Castlewood Baptist Church in Brandon, Miss., who went to Mr. Anderson’s funeral and has become close to the family, believes Mr. Dedmon is a product of his upbringing and a culture that does not do enough to stop bullying.

In an interview at his church in a nicely kept section of the county where Mr. Dedmon was raised, Mr. Richardson, who is white, said Mr. Dedmon had called his son, Jordan, 18, derogatory words for homosexual and mocked his friendship with black students when they were in high school together.

Mr. Richardson said he had raised the issue with school officials, and once had to deal with the police when Mr. Dedmon and some other boys drove to the family home.

The Richardsons point out that while racism is not unique to the Deep South, a deep streak of “us and them” exists.

“There is a subgroup that takes the Southern country-boy thing to another level,” Jordan Richardson said.

Mr. Dedmon’s lawyer did not respond to requests for an interview, but friends and family of some of the young people involved say the death was an accident.

At the Sonic Drive-In in Rankin County, where redneck can be a term of pride among the young whites who hang out nightly, the young people do not see Mr. Anderson’s death as a hate crime. And they say they are not racists.

“They don’t know how bad this hurts us,” said Shanna Brenemen, who attends Brandon High School and was close to Mr. Dedmon.

Although a conversation with them might be laced with racial slurs, they point to black friends, including some running Tater Tots and limeades to the cars parked at the drive-in. The way people are portraying them is simply wrong, they said.

“We’re just country, and whoever comes here, we welcome everybody,” said Mr. Dedmon’s younger sister, Tiffany, who will be a junior at Brandon High School. “This whole thing is getting blown out of proportion.”

In a letter he sent her from his jail cell, Mr. Dedmon said he had committed himself to Jesus. He warned his sister away from trouble. “I want you to get in the Bible for real,” he wrote. “I don’t want you to end up like this. I thought drinking was fun but look where it got me. And seriously choose your friends wisely, Tiff. My so-called friends got me in here.”

For Mr. Bradfield and Mr. Anderson’s siblings, the case is nothing but a hate crime. Jackson, for its part, has been slow to publicly address the case. Mayor Harvey Johnson, who is black, issued his first public statement on the matter last week. A public vigil was held on Aug. 14. A few hundred people marched from a nearby church to the motel parking lot and placed a wreath on the grassy spot near the curb where Mr. Anderson was hit.

Perhaps interest in the case was muted, people close to the family and in the community said, because Mr. Anderson’s family had been slow to come forward.

Although the family has created the James Craig Anderson Foundation for Racial Tolerance, they wanted to protect themselves from the media scrum and political opportunism that would surely come from a fist-pounding demand for justice, said Mr. Thompson, the lawyer. Mr. Anderson’s family and others wonder why only two of the seven teenagers were charged. And perhaps the toughest question of all: Could such a potent strain of racism exist in a city that has worked for decades to overcome it?

“The Help,” a film that explores the relationships between black maids and their white employers in the 1960s, sold out several shows during its debut weekend here.

People walking out of a theater an hour after the vigil last week said that although Jackson has changed in some ways, racism remains.

“It’s still here,” said B. J. Quick, 50, a black man who saw the movie with his girlfriend, who is white. “It’s just under the surface more.”