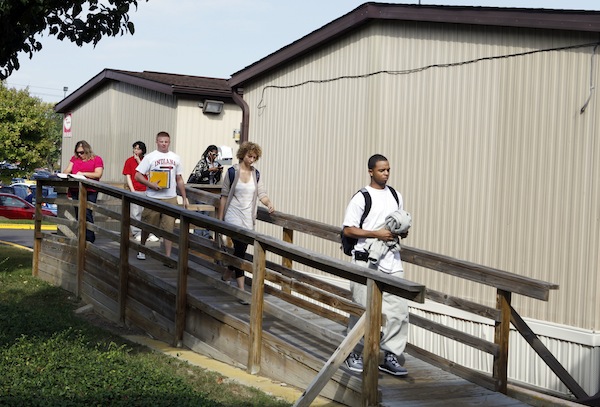 The analysis and resulting list are part of an initiative to improve graduation rates among the six million Americans who enroll in the primarily two-year, public educational institutions each year. Community colleges are now the fastest-growing sector of higher education in this country, with students making up 40 percent of total undergrads nationwide.

President Obama pledged $12 billion to community colleges as part of his goal for the United States to lead the world in the proportion of college graduates by 2020, but Congress only approved a fraction of that funding. The Aspen competition was announced at a White House conference on community colleges last fall.

To pick the winners, judges analyzed Department of Education data on the percentage of students who graduate with an associate's degree or successfully transfer from their community colleges into four-year institutions. They also assessed the proportion of low-income and minority students who completed each program, and if completion rates improved over time at the particular schools. The 120 winners, representing the top 10 percent of the country's 1,200 community colleges, can now enter to win a $700,000 prize.

Even as millions of students have flocked to overcrowded community colleges during the recession, the institutions are doing a pretty bad job at graduating those students. Fewer than three in ten full-time community college students graduate with a two-year degree in three years, according to Department of Education data. And not even half of all students who enroll in community colleges with the goal of graduating from them or transferring to a four-year university meet that goal within six years.

One major problem is that the bulk of community college students take remedial courses because they did not learn basic math and reading comprehension in high school. Remedial courses do not transfer to four-year universities, and they also slow students' progress toward an associate's degree, even though they are often necessary. Another problem is that not all community colleges are clear about which courses transfer to four-year institutions, so students often waste time on classes that don't get them closer to a bachelor's degree.

The point of the Aspen competition is to identify colleges that are beating these problems so that their strategies can be exported to struggling schools with dismal graduation rates.

Community college enrollment surged in 2008 even as the percentage of young people in four-year colleges stayed flat. Some community colleges have had to turn students away as their shrinking budgets haven't been able to keep up with record enrollment. California community colleges warn they may have to reject as many as 400,000 applicants this fall.

(Students in Ivy Tech Community College in Indianapolis, one of many community colleges where enrollment has surged: AP)