Nancy Harrop, in red, the mother of Rachelle Grimmer, at a memorial in the Laredo, Tex., trailer park where Ms. Grimmer and her children had lived. 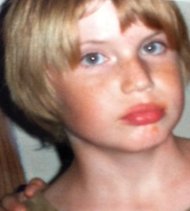 Timothy Donald Grimmer, 10, was fatally shot by his mother.

But Ms. Grimmer’s troubles were far deeper than a lack of food stamps, and neither the police nor the employee she held hostage could resolve them.

Divorced and living a vagabond existence in Texas in recent months, Ms. Grimmer, 38, told the police she was frustrated that she had been denied benefits in other states. She said that her former husband was affiliated with the Russian mob and the Ku Klux Klan, a situation she said led to government harassment that prevented her from receiving public assistance.

Her hostage, Robert Reyes, a supervisor who had offered himself in trade for two other employees Ms. Grimmer had taken hostage, granted her the food stamp benefits she had requested — $3,050 worth, retroactive to July, the month she had first applied. The police slipped the paperwork under the door to show Ms. Grimmer it was for real. But she refused to leave the small office in the Texas Health and Human Services building, at times sitting in a chair with her daughter on her lap and communicating with the police on an office phone.

About 10 minutes before midnight, about seven hours into the standoff, she hung up on hostage negotiators. Moments later, three shots were heard. Ms. Grimmer had shot both of her children in the head, and then herself. She died at the scene. The children were taken to University Hospital in San Antonio. Her daughter, Ramie Marie Grimmer, 12, died on Wednesday. Her son, Timothy Donald Grimmer, 10, died a day later.

Carlos R. Maldonado, Laredo’s police chief, said that the denial of benefits was only one of a series of issues that had been troubling Ms. Grimmer, but that investigators had more questions than answers about her motive. The police were not certain if she was being treated for mental health problems and did not know why she moved several months ago to Laredo, a border city of 236,000, where she had no family.

“Unfortunately in these situations, there’s a lot of questions that we have and a lot of those questions may never be answered,” Chief Maldonado said. “I think we did everything that we possibly could to resolve the situation. We heard people say, why didn’t the tactical team intervene and do something about the mother and save the children? There was never any inclination, any information available to us, that the children were in any danger at all.”

But Ramie appeared to have known her life was in danger. At one point during the standoff, using an office computer, she updated her Facebook page, writing “may die 2day” in the section for posting where she worked. Later, she wrote, “tear gas seriasly,” though none was used by the police.

Ms. Grimmer grew up in Montana and had been living in Ohio in 2005 when she divorced her husband and the children’s father, Dale R. Grimmer. By 2010 she had moved to Texas, and in recent months she and her children seemed to have no permanent address.

In September 2010, the family was staying in a tent on a beach on the South Texas coast. In Laredo, they lived at a mobile home park in a small trailer with a cracked wall. Neighbors and park workers would help them with groceries and cash. Ms. Grimmer sold her truck, forcing the family to walk long distances around town.

Janie Rodriguez, the manager of Towne North Mobile Home and RV Park, said that Ms. Grimmer often told her she was frustrated by the state’s refusal to give her benefits and that, one day weeks ago, she showed her a fax receipt for documents she had sent the social services office. “I do blame the state,” Ms. Rodriguez said. “She was a very intelligent person and a very wonderful person, a very good mother. She was not mentally ill. The state never came to see how she was living.”

The children were not enrolled in local schools, but were being home-schooled. The state’s child welfare agency, the Department of Family and Protective Services, had come in contact with the family at least twice before.

After receiving a report of possible neglect, investigators from the agency checked on the family in September 2010, when they were living on the beach. But the children appeared to be taken care of, and Ms. Grimmer had food and money, so the case was closed, a department spokesman said. In June, Ms. Grimmer told the police in Corpus Christi that she had been a victim of domestic violence. The agency checked on her and the children but had no concerns, said the spokesman, Patrick Crimmins.

Ms. Grimmer had first applied for food stamps at the Laredo social services office on July 7. She did not meet the criteria to receive benefits within 24 hours because she was receiving child support. But an employee scheduled a time with Ms. Grimmer for someone to call her the next day to review her case, a spokeswoman for the Texas Health and Human Services Commission said. A caseworker called twice but was unable to reach her, the spokeswoman said.

A letter was sent to Ms. Grimmer asking her to reschedule, and the appointment was set for July 22. On that day, a caseworker interviewed Ms. Grimmer by phone and explained what information was needed, said the spokeswoman, Stephanie Goodman. Though Ms. Grimmer turned in some of the paperwork, she did not supply materials verifying the amount of child support she had been receiving monthly, Ms. Goodman said.

On Aug. 8, the case was closed, and Ms. Grimmer was sent a letter informing her that she had been denied food stamp benefits because of the missing information, Ms. Goodman said.

In Texas, benefits applications are approved more often than they are denied: in the past six months, 85 percent of cases statewide were approved, and the median number of days to process an application was 12, the agency said.

In mid-November, Ms. Grimmer called the agency’s ombudsman office, saying that she disagreed with the reason she was denied benefits. A supervisor called her on Dec. 1 but could not reach her. No one in the Laredo office heard from her until she walked in on Monday.

The agency is reviewing its handling of Ms. Grimmer’s case. “I think we did everything we could,” said Thomas M. Suehs, the commissioner of health and human services. “It’s a tragic situation.”

Outside the Grimmers’ trailer on Thursday, neighbors gathered to pray for the family. Standing next to a memorial of balloons and teddy bears, one mother spoke of the sunflower bookmark Ms. Grimmer had drawn for her. Santiago Morantes Jr., 16, recalled seeing Ms. Grimmer, Ramie and Tim walking to the post office one morning. He remembered it because he noticed all three of them were barefoot.