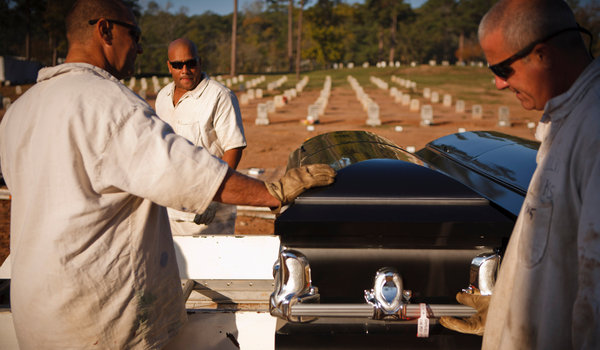 The Rites of a Prison Cemetery 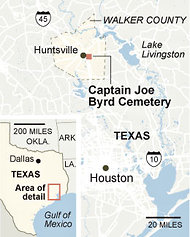 On 22 acres in Texas, thousands of prisoners are buried. More Photos »

Mr. Davis was charged, convicted, sentenced and incarcerated for capital murder by the State of Texas after taking someone’s life on Nov. 19, 1977. But when he died in November 2011, Texas seemed his only friend. His family failed to claim his body, so the state paid for his burial.

On a cold morning in this East Texas town, a group of inmates bowed their heads as a prison chaplain led a prayer for Mr. Davis, his silver-handled black metal coffin resting on wooden planks above the grave the prisoners had dug for him. Wearing sunglasses, work boots and dirt-smeared white uniforms, they might have resembled painters were they not so solemn, holding their caps and gloves in their folded hands.

They were Mr. Davis’s gravediggers but also his mourners. No one who knew Mr. Davis bothered to attend his funeral, so it was left up to Damon Gibson, serving 14 years for theft, and the rest of the prison crew to stand in silence over the grave of a man they had never met. Then Mr. Gibson and the others put their gloves on and lowered the coffin into the ground using long straps, providing him eternal rest in the one place in Texas where murderers and other convicts whose bodies are unclaimed can be interred, remembered and, if but for a few moments, honored.

On this day, Mr. Davis’s funeral was one of seven at the Captain Joe Byrd Cemetery, the largest prison graveyard in the country, 22 acres where thousands of inmates who were executed or died while incarcerated are buried. All of them went unclaimed by their relatives after they died, but the cemetery is not a ramshackle potter’s field. It is a quiet green oasis on a wide hill near the campus of Sam Houston State University, with rows of small crosses and headstones, at the center of which stand a decorative brick well and a white-painted altar bearing a cross. The last years of these inmates’ lives were spent under armed guard behind bars and barbed wire, but there is no fence along Bowers Boulevard here, and no one keeps watch.

Walking along the hill beneath the pine trees, stepping between the rows of hundreds of identical white crosses and tablet headstones, you think of Arlington National Cemetery. But if Arlington is for heroes, the Byrd cemetery is for villains.

The concrete cross marking the grave of Duane Howk lists his name, inmate number and date of death in June 2010 but says nothing of the offense for which he was serving a life sentence, aggravated sexual assault of a child. The serial killer Kenneth Allen McDuff, executed in 1998 for strangling a 22-year-old pregnant mother of two with a rope, had gained notoriety for being the only inmate in United States history who was freed from death row and returned years later after killing again, but he lies beneath a nameless cross reading 999055.

The state’s prison agency, the Texas Department of Criminal Justice, has been the steward of the cemetery since the first inmates were buried there in the mid-1800s, maintaining and operating it in recent decades as carefully and respectfully as any religious institution might.

An inmate crew from the nearby Walls Unit prison cleans the grounds, mows the grass and trims trees four days per week. The inmates dig the graves with a backhoe and shovels, serve as pallbearers and chisel the names on the headstones by hand using metal stencils and black paint. The cemetery was named for an assistant warden at the Walls Unit who helped clean and restore the graveyard in the 1960s, and even today, the warden or one of his deputies attends every burial.

“It’s important, because they’re people still,” said the warden, James Jones. “Of course they committed a crime and they have to do their time, and unfortunately they end up dying while they’re in prison, but they’re still human beings.”

In a state known for being tough on criminals, where officials recently eliminated last-meal requests on death row, the Byrd cemetery has been a little-known counterpoint to the mythology of the Texas penal system. One mile from the Walls Unit, which houses the state’s execution chamber, about 100 inmates are buried each year in ceremonies for which the state spends considerable time and money. Each burial costs Texas about $2,000. Often, as in Mr. Davis’s case, none of the deceased’s relatives attend, and the only people present are prison officials and the inmate workers.

Though all of those buried here were unclaimed by relatives, many family members fail to claim the bodies because they cannot afford burial expenses and want the prison agency to pay the costs instead. The same relatives who declined to claim the body will then travel to Huntsville to attend the state-paid services at the cemetery.

“I think everyone assumes if you’re in a prison cemetery you’re somehow the worst of the worst,” said Franklin T. Wilson, an assistant professor of criminology at Indiana State University who is writing a book about the cemetery. “But it’s more of a reflection of your socioeconomic status. This is more of a case of if you’re buried there, you’re poor.”

Prison officials have verified 2,100 inmates who are buried at the cemetery, but they say there may be additional graves. Professor Wilson recently photographed every headstone and estimated that there were more than 3,000 graves.

In some ways, the cemetery and the funerals held there lack precision and formality. Coffins are transported from the altar at the center of the cemetery to the gravesite on a trailer hitched to the back of a green John Deere tractor. Names and words are misspelled on a few headstones and markers. Relatives have brought portable stereos to play music during the funerals, blaring rap songs and AC/DC’s “Hell’s Bells.” Most days, after the inmate crew has returned to the prison, the cemetery is a deserted, lonesome place. Of the thousands of graves, only a handful have flowers on them.

“You’ve got guys here who died in prison and were buried out here, and they could have made a difference someplace, even if it was only in a small community somewhere,” said Jim Willett, director of the nearby Texas Prison Museum and a retired Walls Unit warden who attended nearly 200 graveside services. “These guys didn’t just mess up their lives. There’s their family and other families that got messed up because of some screwup that they did, and then they wind up like this.”

On the day of Mr. Davis’s interment, three burials had family members present, and four did not. Vandals had entered the cemetery and set a large brush pile on fire, filling the morning air with smoke. Neither Mr. Gibson nor the inmate workers knew any of the men they were burying. “It has made me a better person,” said Mr. Gibson, 38, a father of two from Houston. “It has made me reflect on the things I’ve done. I don’t want this to be me.”

Two of the seven inmates who were buried, including Mr. Davis, were serving life sentences for murder, and the others had been imprisoned for drunken driving, theft, assault, sexual assault of a child or burglary when they died. Mr. Davis spent nearly 34 of his 54 years behind bars. In the ground in Huntsville, he was finally free of his prison uniform. The funeral home that handles inmates’ burials put him in dark pants, a white shirt and a tie.