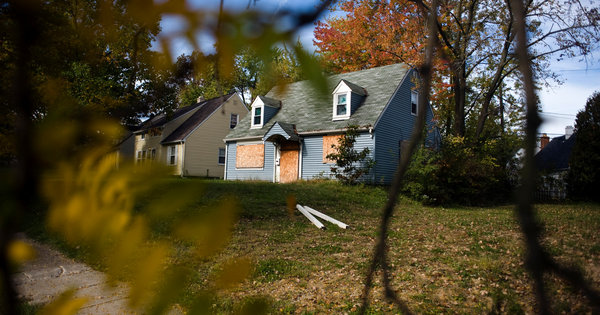 The recession and the foreclosure crisis hit the suburbs of Cleveland, like Warrensville Heights, particularly hard. More Photos »

A New Image for Suburbs

Poverty in the Suburbs

When Randall Park Mall opened in 1976 in North Randall, Ohio, it was the largest indoor mall in the country. The two million-square-foot retail space officially closed in 2009. More Photos »

The increase in the suburbs was 53 percent, compared with 26 percent in cities. The recession accelerated the pace: two-thirds of the new suburban poor were added from 2007 to 2010.

“The growth has been stunning,” said Elizabeth Kneebone, a senior researcher at the Brookings Institution, who conducted the analysis of census data. “For the first time, more than half of the metropolitan poor live in suburban areas.”

As a result, suburban municipalities — once concerned with policing, putting out fires and repairing roads — are confronting a new set of issues, namely how to help poor residents without the array of social programs that cities have, and how to get those residents to services without public transportation. Many suburbs are facing these challenges with the tightest budgets in years.

“The whole political class is just getting the memo that Ozzie and Harriet don’t live here anymore,” said Edward Hill, dean of the Levin College of Urban Affairs at Cleveland State University.

This shift has helped redefine the image of the suburbs. “The suburbs were always a place of opportunity — a better school, a bigger house, a better job,” said Scott Allard, an associate professor at the University of Chicago who focuses on social welfare policy and poverty. “Today, that’s not as true as the popular mythology would have us believe.”

Since 2000, the poverty roll has increased by five million in the suburbs, with large rises in metropolitan areas as different as Colorado Springs and Greensboro, N.C. Over the decade, Midwestern suburbs ranked high; recently, the rise has been sharpest in communities the housing collapse hit the hardest, like Cape Coral, Fla., and Riverside, Calif., according to the Brookings analysis.

Poverty is new in Parma Heights, a quiet suburb of cul-de-sacs and clipped lawns, and asking for help can be hard. The Parma Heights Food Pantry, which began serving several dozen families a month in 2006, and now helps 260, draws a stream of casualties from the moribund economy. Many never needed food relief before.

Like Mary W., 59, who has worked all her life, most recently at a tire company in Cleveland, and was always the one to remind colleagues to donate to charity. Now she is the one who receives it.

When she first came to the pantry, “I cried my eyes out,” said Mary, who asked that her last name not be used because she did not want her children to know about her financial troubles.

At Vineyard Community Church in Wickliffe, another Cleveland suburb, Brent Paulson, the pastor, said he had to post an employee in the driveway the day the church’s food bank was open to coax people inside, they were so ashamed to ask for help.

In a sign of just how far the economic distress had spread, one volunteer saw his former boss come to the pantry, Mr. Paulson said.

The Cleveland Food Bank, which serves six counties, doubled its distribution between 2005 and 2010. “There’s this sense of surprise,” said Anne Goodman, the director, “this feeling that this has got to be a mistake. It has got to be a bad dream.”

Calls to the United Way social services hot line from suburban areas in northeast Ohio more than doubled from 2005 to 2010, outstripping the increase in cities. “We are seeing a rise in need in places we never expected it,” said Stephen Wertheim, director of the hotline, First Call for Help.

Poverty has been growing in the suburbs for years — along with the population. But the 53 percent increase in poverty far outstripped the 14 percent population increase in the past decade, speeding the change in their status as upper-middle-class enclaves. They have been attracting immigrants following construction jobs and families from cities seeking inexpensive housing as suburbs aged.

Federal vouchers to get poor people into private housing also contributed, Ms. Kneebone said. Cleveland was No. 15 among the country’s top 100 metropolitan areas for increase in suburban share of vouchers.

Warrensville Heights, a suburb southeast of Cleveland, was pristine when Fran Matthews moved there in 1987, with good schools, manicured lawns and middle-class neighbors, she said. Now for-sale signs dot overgrown yards. Break-ins are on the rise, though crime is still far lower than in the city. Over all, the suburban poverty rate — 11.4 percent in 2010 — is still far below the city rate of 20.9 percent, according to Ms. Kneebone.

“Now when you come home, you have to look around before you get out of the car,” Ms. Matthews said.

The changes have affected the school system, she said, and her grandson now attends a charter school in Cleveland.

The double punch of the recession and the foreclosure crisis — which hit Cleveland and its suburbs particularly hard — has dragged middle-class people down the income ladder. As defined by the Census Bureau, the poverty line for a family of four was $22,314 last year.

“This community is middle class, but right on the line,” said Brad Sellers, a retired professional basketball player who grew up in Warrensville Heights and is running for mayor. “Any dramatic downturn can send you over the edge.”

The unemployment rate among black Americans was 16 percent in September, according to the Bureau of Labor Statistics — nearly double the national rate, a painful statistic in a suburb that is majority black.

Some communities resist the idea that poverty exists. When Ann George, who runs the Parma Heights pantry with stalwart volunteers, speaks at churches and community gatherings, “I see the skepticism on people’s faces,” she said. “They say, ‘This is Parma Heights, not Cleveland.’ ”

Other suburbs are adapting. In Maple Heights, Mayor Jeffrey Lansky embraced the idea of a food bank, setting aside a space for it in 2008 and having the Fire Department help renovate it. The Cuyahoga County Public Library now runs after-school homework centers with snacks from the food bank, aimed at the growing population of poor children.

Edward FitzGerald, the executive of Cuyahoga County, argued that the increase in the suburban poor population could help lead to a fundamental change in local government. For years Cleveland had most of the population — and resources — but policy should reflect the flip in favor of the county, he said.

And with the state slashing funds, counties and the suburbs they contain will have to ramp up social services and economic development on their own, many for the first time.

“You’re talking about governing systems that have never really done this before,” Mr. FitzGerald said.