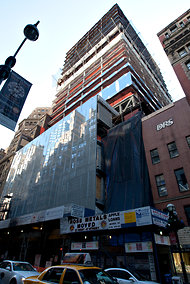 The International Gem Tower, under construction, in the diamond district.

The number of foreign applicants, each of whom must invest at least $500,000 in a project, has nearly quadrupled in the last two years, to more than 3,800 in the 2011 fiscal year, officials said. Demand has grown so fast that the Obama administration, which is championing the program, is seeking to streamline the application process.

Still, some critics of the program have described it as an improper use of the immigration system to spur economic development — a cash-for-visas scheme. And an examination of the program by The New York Times suggests that in New York, developers and state officials are stretching the rules to qualify projects for this foreign financing.

These developers are often relying on gerrymandering techniques to create development zones that are supposedly in areas of high unemployment — and thus eligible for special concessions — but actually are in prosperous ones, according to federal and state records.

One of the more prominent projects is a 34-story glass tower in Manhattan that is to cost $750 million, one-fifth of which is to come from foreign investors seeking green cards. Called the International Gem Tower, it is rising near Fifth Avenue in the diamond district of Manhattan, one of the wealthiest areas in the country.

Yet through the selective use of census statistics, state officials have classified the area as one plagued by high unemployment, the federal and state records show. As a result, the developer has increased the project’s chances of attracting foreigners who will accept little, if any, return on their investment in the project if it means they can secure American visas for their families.

A senior federal immigration official, Alejandro Mayorkas, acknowledged in an interview on Friday that the program might need more scrutiny. Mr. Mayorkas and other federal officials said they were concerned that some of the maps that New York and other states were approving might not adhere to the spirit and intent of the regulations.

The Times’s review of the program in New York indicates that several other major projects are also based on questionable maps.

For example, the Battery Maritime Building, at the foot of Manhattan near Wall Street, has been classified as being located in an area that needs help attracting jobs. That designation is the result of a development zone whose outlines resemble a gerrymandered political district, project documents show.

The zone snakes up through the Lower East Side, skirting the wealthy enclaves of Battery Park City and TriBeCa, and then jumps across the East River to annex the Farragut Houses project in Vinegar Hill, Brooklyn.

In fact, the small census tract that contains the Farragut Houses has become a go-to area for developers seeking to use the visa program: its unemployed residents have been counted toward three projects already.

The giant Atlantic Yards project in Brooklyn, which abuts well-heeled brownstone neighborhoods, has also qualified for the special concessions using a gerrymandered high-unemployment district: the crescent-shaped zone swings more than two miles to the northeast to include poor sections of Crown Heights and Bedford-Stuyvesant. A local blogger and critic of Atlantic Yards, Norman Oder, has referred to the map as “the Bed-Stuy Boomerang.”

Since 2008, developers have raised or have planned to raise close to $1 billion on these projects in New York City, according to federal and state records. Almost all of that money would come in increments of $500,000 — much of it from residents of China — and pour into wealthy areas.

In interviews, New York State economic-development officials praised the program but were reluctant to accept responsibility for administering it. Indeed, some state officials who certified projects for the program acknowledged that they did not know what was being built. They said they were following guidance from federal regulators.

“This program serves as a valuable tool to support job-creating projects that will put areas of high unemployment on a continued path to economic recovery and growth,” said Austin Shafran, a spokesman for Empire State Development, the state agency that oversees the program in New York.

Urged on by federal and state officials, investors in faraway places like Shanghai and Seoul along with American developers have been flocking to the program, which was created by Congress during the recession of 1990.

Under the program, known as EB-5, investors receive a visa that provides residency for two years and can be converted into a permanent green card if the holders can show the investment produced at least 10 jobs, even if the project has not been completed.

With the surge in EB-5 projects, many lawyers and consultants, in the United States and overseas, are getting involved. In China alone, more than 500 agents are jockeying to connect wealthy Chinese people to American developers, experts said.

Investors throng EB-5 conferences. Many, successful in their own countries, said they wanted to secure American residency for their children. But the competition has given rise to unsavory practices, EB-5 lawyers and consultants said, like agents who falsely promise guaranteed returns.

The minimum investment in the program was set at $1 million and has not changed in more than 20 years. But if the project is in a rural area or a place where the unemployment rate is 50 percent above the national average, the threshold for investing is $500,000, not $1 million.

By creating development zones that are ruled eligible for $500,000 investments, urban developers are at an advantage in luring contributions.

The zone drawn up for the Gem Tower consists of two census tracts in Midtown Manhattan. According to census figures, the tract that contains the project had an unemployment rate of zero for the last five years.

But the State Labor Department calculated that there were enough unemployed people in an adjoining census tract — one that includes Times Square — to justify calling the small zone an area of high unemployment.

Lela Goren, director general of Extell New York Regional Center, which is helping to raise the EB-5 investments for the Gem Tower, said she could not explain how the tower’s zone qualified as needy. “It qualifies, whatever the numbers, and it got approved,” Ms. Goren said.

The consultants arranging the EB-5 financing for the Battery Maritime and Atlantic Yards projects declined to comment.

Officials in other states expressed dismay over how New York developers were using the program. They said New York was unfairly siphoning off investments from less-developed areas.

“A lot of projects are in areas that are head-scratchers,” said James Candido, an official with Vermont’s Department of Economic Development.

Other states have sometimes not allowed such questionable development zones. California told a developer to relocate a manufacturing plant for a surgical-products company from a more prosperous part of San Jose to a poorer one, said Brook J. Taylor, a spokesman for the Governor’s Office of Business and Economic Development in California.

“The question is, are the state authorities adhering to the spirit of the law?” said Mr. Mayorkas, the federal immigration official who is the director of United States Citizenship and Immigration Services. “Where is the project being developed, and where are the jobs being created? Are the people from the areas of high unemployment being employed? Because that’s really the purpose. If they’re not being hired from those areas, then the question is justified.”

Mr. Mayorkas, whose staff has been scrambling to keep up with the boom in the program, said in the interview on Friday that he was concerned about allegations of gerrymandering.

If some project designations were not achieving “legislative intent,” he said, “then I think that is something that we need to consider as the laws are reviewed.”