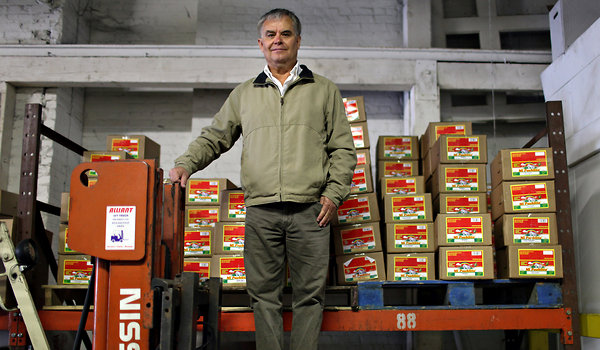 Yet Mr. Sanchez has lived the great American success story. He turned a business selling tortillas on the street into a $19 million food manufacturing empire that threaded together the Mexican diaspora from coast to coast and reached back into Mexico itself.

Mr. Sanchez is part of a small class of immigrants who arrived in the United States with nothing and, despite speaking little or no English, became remarkably prosperous. And while generations of immigrants have thrived despite language barriers, technology, these days, has made it easier for such entrepreneurs to attain considerable affluence.

Many have rooted their businesses in big cities with immigrant populations large enough to insulate them from everyday situations that demand English. After gaining traction in their own communities, they have used the tools of modern communication, transportation and commerce to tap far-flung resources and exploit markets in similar enclaves around the country and the world.

“The entire market is Hispanic,” Mr. Sanchez said of his business. “You don’t need English.” A deal, he said, is only a cheap long-distance phone call or a few key strokes on the computer away. “All in Spanish,” he added.

Mr. Sanchez, 66, said he always wanted to learn English but had not had time for lessons.

“I couldn’t concentrate,” he said in a recent interview, in Spanish. “In addition, all the people around me were speaking in Spanish, too.”

In New York City, successful non-English-speaking entrepreneurs like Mr. Sanchez have emerged from the largest immigrant populations, including those from China, South Korea and Spanish-speaking countries.

Among them is Zhang Yulong, 39, who emigrated from China in 1994 and now presides over a $30-million-a-year cellphone accessories empire in New York with 45 employees.

Kim Ki Chol, 59, who arrived in the United States from South Korea in 1981, opened a clothing accessories store in Brooklyn and went on to become a successful retailer, real estate investor and civic leader in the region’s Korean diaspora.

In the United States in 2010, 4.5 million income-earning adults who were heads of households spoke English “not well” or “not at all,” according to the Census Bureau; of those, about 35,500 had household incomes of more than $200,000 a year.

Nancy Foner, a sociology professor at the City University of New York who has written widely on immigration, said it was clear that modern technology had made a big difference in the ability of immigrant entrepreneurs with poor or no English skills to expand their companies nationally and globally.

“It wasn’t impossible — but much, much harder — for immigrants to operate businesses around the globe a hundred years ago, when there were no jet planes, to say nothing of cellphones and computers,” Ms. Foner said.

Advocates for the movement sometimes known as Official English have long pressed for legislation mandating English as the official language of government, arguing that a common language is essential for the country’s cohesion and for immigrant assimilation and success.

But stories like Mr. Sanchez’s, though certainly unusual, seem to suggest that an entrepreneur can do just fine without English — especially with the aid of modern technology, not to mention determination and ingenuity.

For Mr. Sanchez, who became an American citizen in 1985, one anxious moment came when he had to pass his naturalization test. The law requires that applicants be able to read, write and speak basic English.

But Mr. Sanchez and other entrepreneurs said that the test, at least at the time they took it, had been rudimentary and that they had muddled through it.

Mr. Sanchez immigrated to the United States in 1970 from the Mexican state of Puebla with only a fifth-grade education. He held a series of low-paying jobs in New York, including washing dishes in a Midtown restaurant. The Mexican population in the New York region was small back then, but it soon began growing, as did the demand for authentic Mexican products.

In 1978, Mr. Sanchez and his wife, Carmen, took $12,000 in savings, bought a tortilla press and an industrial dough mixer in Los Angeles, hauled the machinery back to the East Coast and installed it in a warehouse in Passaic, N.J. Mr. Sanchez spent his days driving a forklift at an electrical-equipment factory and spent his evenings and nights making tortillas and selling them door-to-door in Latino neighborhoods around New York City.

His company, Puebla Foods, grew with the Mexican population, and he was soon distributing his tortillas and other Mexican products, like dried chilies, to bodegas and restaurants throughout the Northeast. At its peak, his enterprise had factories in cities all across North America, including Los Angeles, Miami, Pittsburgh, Toronto and Washington. It has since been buffeted by competition and by the economy, and he has scaled back.

He has relied heavily on a bilingual staff, which at times has included his three children, born and raised in New Jersey.

Mr. Zhang, the cellphone accessories entrepreneur, said his lack of English had not been a handicap. “The only obstacle I have is if I get too tired,” said Mr. Zhang, who also owns a property development company and an online retail firm.

In 2001, Mr. Zhang set up a wholesale business in cellphone accessories in Manhattan. He then raised money from relatives and investors in China to open a manufacturing plant there to make leather cellphone cases for export to the United States, Canada and Latin America.

His business boomed, and he opened warehouses in Los Angeles, New York City and Washington, controlling his international manufacturing, supply and retail chain from his base in New York.

Mr. Zhang now lives in a big house in Little Neck, Queens, with his wife, three daughters and parents, and drives a Lexus S.U.V. He has not applied for citizenship, preferring to remain a legal permanent resident and maintain his Chinese citizenship, which spares him the bother of securing a Chinese visa when he goes to China for business.

While he can speak rudimentary English — he rates his comprehension at 30 percent — he conducts nearly his entire life in Chinese. His employees speak the languages of trading partners: English, Spanish, Creole, Korean and French, not to mention multiple Chinese dialects.

Over the course of a lengthy interview, he gamely tried on several occasions to converse in English, but each time he ran into roadblocks and, with a shrug of resignation, resumed speaking through a translator in Mandarin.

Mr. Kim, the Korean retailer, recalled that when he opened his first store in Brooklyn, nearly his entire clientele was Afro-Caribbean and African-American, and his customers spoke no Korean.

“You don’t have to have a big conversation,” he recalled. “You can make gestures.”

While his holdings have grown, he has also formed or led associations and organizations that focus on empowering the Korean population in the United States. As in business, modern communication has made it much easier for him to raise his profile throughout the Korean diaspora well beyond New York.

Yet he admitted that he was embarrassed by his inability to speak English. He has gone so far as to buy some English-tutorial computer programs, but for years, they have gone mostly unused.