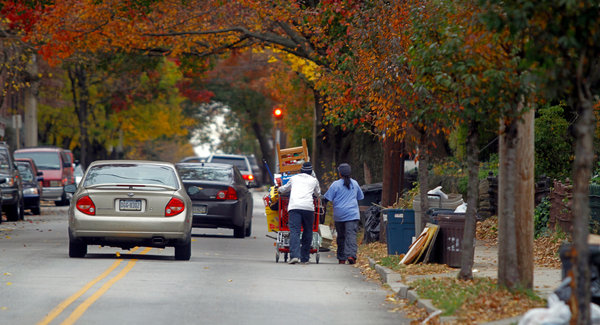 The Germantown area of Philadelphia was formerly considered solidly middle class but is now mostly low income. "Everything started going down in the dumps," a longtime resident said.

Growth in the Residential Segregation of Families by Income, 1970-2009 (pdf) 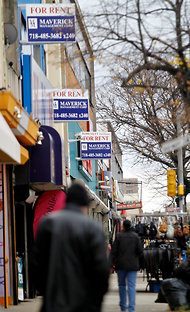 Many stores along West Chelten Avenue in the Germantown area are closed and for rent.

The Northern Liberties neighborhood of Philadelphia is now described as middle class.

The study, conducted by Stanford University and scheduled for release on Wednesday by the Russell Sage Foundation and Brown University, uses census data to examine family income at the neighborhood level in the country’s 117 biggest metropolitan areas.

The findings show a changed map of prosperity in the United States over the past four decades, with larger patches of affluence and poverty and a shrinking middle.

The study comes at a time of growing concern about inequality and an ever-louder partisan debate over whether it matters. It raises, but does not answer, the question of whether increased economic inequality, and the resulting income segregation, impedes social mobility.

Much of the shift is the result of changing income structure in the United States. Part of the country’s middle class has slipped to the lower rungs of the income ladder as manufacturing and other middle-class jobs have dwindled, while the wealthy receive a bigger portion of the income pie. Put simply, there are fewer people in the middle.

But the shift is more than just changes in income. The study also found that there is more residential sorting by income, with the rich flocking together in new exurbs and gentrifying pockets where lower- and middle-income families cannot afford to live.

The study — part of US2010, a research project financed by Russell Sage and Brown University — identified the pattern in about 90 percent of large and medium-size metropolitan areas for 2000 to 2007. Detroit; Oklahoma City; Toledo, Ohio; and Greensboro, N.C., experienced the biggest rises in income segregation in the decade, while 13 areas, including Atlanta, had declines. Philadelphia and its suburbs registered the sharpest rise since 1970.

Sean F. Reardon, an author of the study and a sociologist at Stanford, argued that the shifts had far-reaching implications for the next generation. Children in mostly poor neighborhoods tend to have less access to high-quality schools, child care and preschool, as well as to support networks or educated and economically stable neighbors who might serve as role models.

The isolation of the prosperous, he said, means less interaction with people from other income groups and a greater risk to their support for policies and investments that benefit the broader public — like schools, parks and public transportation systems. About 14 percent of families lived in affluent neighborhoods in 2007, up from 7 percent in 1970, the study found.

The map of that change for Philadelphia is a red stripe of wealthy suburbs curving around a poor, blue urban center, broken by a few red dots of gentrification. It is the picture of the economic change that slammed into Philadelphia decades ago as its industrial base declined and left a shrunken middle class and a poorer urban core.

The Germantown neighborhood, once solidly middle class, is now mostly low income. Chelten Avenue, one of its main thoroughfares, is a hard-luck strip of check-cashing stores and takeout restaurants. The stone homes on side streets speak to a more affluent past, one that William Wilson, 95, a longtime resident, remembers fondly.

“It was real nice,” he said, shuffling along Chelten Avenue on Monday. Theaters thrived on the avenue, he said, as did a fancy department store. Now a Walgreens stands in its place. “Everything started going down in the dumps,” he said.

Philadelphia’s more recent history is one of gentrifying neighborhoods, like the Northern Liberties area, where affluence has rushed in, in the form of espresso shops, glass-walled apartments and a fancy supermarket, and prosperous new suburbs that have mushroomed in the far north and south of the metro area.

Lawrence Katz, an economist at Harvard, said the evidence for the presumed adverse effects of economic segregation was inconclusive. In a recent study of low-income families randomly assigned the opportunity to move out of concentrated poverty into mixed-income neighborhoods, Professor Katz and his collaborators found large improvements in physical and mental health, but little change in the families’ economic and educational fortunes.

But there is evidence that income differences are having an effect, beyond the context of neighborhood. One example, Professor Reardon said, is a growing gap in standardized test scores between rich and poor children, now 40 percent bigger than it was in 1970. That is double the testing gap between black and white children, he said.

And the gap between rich and poor in college completion — one of the single most important predictors of economic success — has grown by more than 50 percent since the 1990s, said Martha J. Bailey, an economist at the University of Michigan. More than half of children from high-income families finish college, up from about a third 20 years ago. Fewer than 10 percent of low-income children finish, up from 5 percent.

William Julius Wilson, a sociologist at Harvard who has seen the study, argues that “rising inequality is beginning to produce a two-tiered society in America in which the more affluent citizens live lives fundamentally different from the middle- and lower-income groups. This divide decreases a sense of community.”