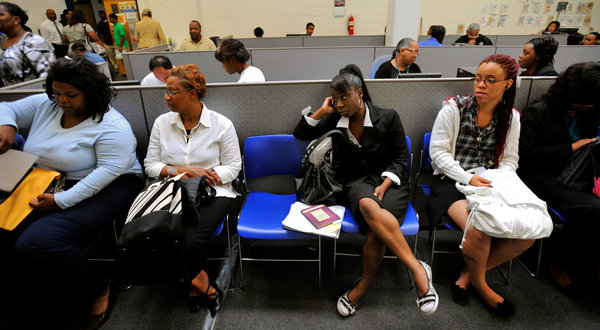 Applicants, some already employed but looking for something better, at a weekly job fair in June sponsored by the Atlanta Workforce Development Agency.

Tough Times, Even for Those With Jobs

Jonathan Adkins of Loganville, Ga., waited for his number to be called during a weekly job fair sponsored by the Atlanta Workforce Development Agency. 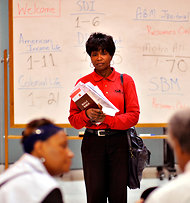 Sherry Woods, a van driver, sought a new job at the Atlanta fair. 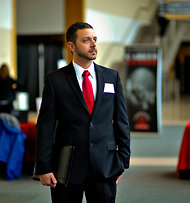 Garland Miller has degrees in finance and accounting but works as a server at a restaurant. He went to a University of Georgia alumni job fair in Duluth.

She opened it occasionally to reread a favorite verse from Philippians: “And my God will meet all your needs according to the riches of his glory in Christ.”

Ms. Woods’s current job has not been meeting her needs. When she began driving a passenger van last year, she earned $9 an hour and worked 40 hours a week. Then her wage was cut to $8 an hour, and her hours were drastically scaled back. Last month she earned just $233. So Ms. Woods, who said that she had been threatened with eviction for missing rent payments and had been postponing an appointment with the eye doctor because she lacks insurance, has been looking for another, better job. It has not been easy.

“I’m looking for something else, anything else,” she said. “More hours. Better pay. Actual benefits.”

These are anxious days for American workers. Many, like Ms. Woods, are underemployed. Others find pay that is simply not keeping up with their expenses: adjusted for inflation, the median hourly wage was lower in 2011 than it was a decade earlier, according to data from a forthcoming book by the Economic Policy Institute, “The State of Working America, 12th Edition.” Good benefits are harder to come by, and people are staying longer in jobs that they want to leave, afraid that they will not be able to find something better. Only 2.1 million people quit their jobs in March, down from the 2.9 million people who quit in December 2007, the first month of the recession.

“Unfortunately, the wage problems brought on by the recession pile on top of a three-decade stagnation of wages for low- and middle-wage workers,” said Lawrence Mishel, the president of the Economic Policy Institute, a research group in Washington that studies the labor market. “In the aftermath of the financial crisis, there has been persistent high unemployment as households reduced debt and scaled back purchases. The consequence for wages has been substantially slower growth across the board, including white-collar and college-educated workers.”

Now, with the economy shaping up as the central issue of the presidential election, both President Obama and Mitt Romney have been relentlessly trying to make the case that their policies would bring prosperity back. The unease of voters is striking: in a New York Times/CBS News poll in April, half of the respondents said they thought the next generation of Americans would be worse off, while only about a quarter said it would have a better future.

And household wealth is dropping. The Federal Reserve reported last week that the economic crisis left the median American family in 2010 with no more wealth than in the early 1990s, wiping away two decades of gains. With stocks too risky for many small investors and savings accounts paying little interest, building up a nest egg is a challenge even for those who can afford to sock away some of their money.

Expenses like putting a child through college — where tuition has been rising faster than inflation or wages — can be a daunting task. When Morgan Woodward, 21, began her freshman year at the University of California, Berkeley, three years ago, her parents paid about $9,000 a year in tuition and fees. Now they pay closer to $13,000, and they are bracing for the possibility of another jump next year. With their incomes flat, though, they recently borrowed money to pay for her final year, and to begin paying the tuition of their son, who plans to start college this fall.

“You know there is going to be small incremental increases in tuition, but not the 8, 10, 12 percent increase every year we’ve seen,” said Ms. Woodward’s father, Cliff Woodward, 52, who lives in Pleasanton, Calif., and is an independent sales representative for an eyeglass company. So the Woodwards, who drive cars with 150,000 and 120,000 miles on them, have cut back.

“No vacations, no big screens,” Mr. Woodward said. “We’ve cut down on going out a little bit, but it’s worth it.”

People with college degrees still get jobs with better pay and benefits than those without, but many recent college graduates are finding it hard to land the kinds of jobs they had envisioned. David Thande, 27, who graduated from the University of California, Los Angeles, five years ago, works part time as a clerk in an Apple Store.

“I’m not even full time, so I spend about 45 minutes every day begging people for hours, checking if someone canceled, struggling to make it work,” Mr. Thande said, adding that he had fallen behind on paying back his student loans.

Garland Miller, 28, who has degrees in finance and accounting from the University of Georgia and Kennesaw State University, had hoped to land a job at a big accounting firm, and to have been able to buy a home by now. Instead he finds himself working as the lead server at a steakhouse. But he has not given up on trying to move into the field that he prepared himself for: This month, he attended a jobs fair in Duluth, a suburb of Atlanta, organized by the University of Georgia for its alumni.

“I’m not in a job where I’m using all of my skills,” Mr. Miller said. He said that with many baby boomers unable to retire as early as they had hoped, there are fewer opportunities for younger workers to move up and take their places. “Instead you have everybody competing for entry-level positions,” he said.

Things are much worse for people without college degrees, though. The real entry-level hourly wage for men who recently graduated from high school fell to $11.68 last year, from $15.64 in 1979, according to data from the Economic Policy Institute. And the percentage of those jobs that offer health insurance has plummeted to 22.8 percent, from 63.3 percent in 1979.

Though inflation has stayed relatively low in recent years, it has remained high for some of the most important things: college, health care and even, recently, food. The price of food in the home rose by 4.8 percent last year, one of the biggest jumps in the last two decades.

Sam Chea, 38, who lives in Oakland and works nights delivering pizzas for Domino’s, said that he had been feeling the pinch at grocery stores, and worried that his lack of a college education was making it harder for him to find decent work. The other day he went to the nearby city of El Cerrito to apply for a second job at Nation’s Giant Hamburgers, a regional chain.

“I’ll be more secure with another job,” he said. “It’s scary. I don’t have an education, and I’m worried about my rent.”

“Everything’s gone up. Rent went up, gas went up, food went up, milk went up, cheeseburgers went up, even cigarettes went up,” said Mr. Chea, who had stopped at the barbershop to spiff up before his job interview. “I’m used to getting a haircut for $6 or $7, but they charged me $9. Even haircuts have gone up.”