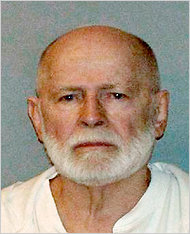 James (Whitey) Bulger, in a mug shot from the 1950s, when he was still a rising young criminal in South Boston.

Mr. Bulger is making initial appearances in two separate cases from 1995 and 1999, according to the United States Attorney’s office. He faces federal racketeering charges in connection with murder, extortion, money laundering and other crimes.

Ms. Greig, who faces the lesser charge of harboring a fugitive, will appear afterward in a separate courtroom.

They seemed to be just another fading, elderly couple -- Charlie and Carol Gasko -- enjoying retirement in a modest apartment building a few blocks from the Pacific in Santa Monica. He told a neighbor he had emphysema and spent his days lying on the couch watching television. Carol would venture out for strolls on the nearby Third Street Promenade, stopping by the Saturday Farmers’ Market or feeding a neighborhood stray cat. Often, he tagged along.

But they were reclusive and a little odd, neighbors said. Charlie would often wear a baseball cap or fedora that shadowed his face. He would bark at neighbors when Carol lingered too long to speak to them, said one neighbor, who described him as “a rageaholic”; Carol explained that he was suffering from dementia. In recent months, another neighbor said, a note was taped to their door reading, “Please do not Knock at Any Time.”

But the couple who led this quiet life for more than a decade were not who they said they were.

Charlie Gasko was a notorious gangster — Mr. Bulger, once Boston’s most fearsome crime boss, a fixture on the Federal Bureau of Investigation’s 10 Most Wanted list — and she was his girlfriend, Ms. Greig, 60. They fled more than 16 years ago after Mr. Bulger, a sometime bureau informer, learned from a retired F.B.I. agent that he was about to be arrested.

The long manhunt — which had produced Elvis-like Bulger sightings around the world, rumors of his death and considerable embarrassment for the F.B.I. — ended shortly after 5 p.m. Wednesday when agents lured them out of their apartment and put them under arrest. Mr. Bulger, 81, offered no resistance as his long run as a fugitive ended and he came face to face with accusations of killing 19 people and other crimes, the authorities said.

Appearing in Federal District Court in Los Angeles on Thursday, Mr. Bulger and Ms. Greig waived their right to fight their return to Boston and agreed to go back. Mr. Bulger — wearing a white shirt and blue jeans, and sporting a thick white beard — sat at the front, looking straight over the courtroom, grinning as he surveyed the scene. Ms. Grieg appeared spectral, with short white hair and sunken cheeks.

When Magistrate John McDermott asked Mr. Bulger if he had read the indictment, he responded in a thick Boston accent. “I got them all here,” Mr. Bulger said. “It will take me quite a while to finish these. But I know them all pretty much.”

The end came just days after the F.B.I., increasingly frustrated at the continued elusiveness of Mr. Bulger — who had a $2 million bounty on his head — decided the best way to find the mobster was through his girlfriend. There had been no sightings of Ms. Greig, a former dental hygienist, since her disappearance, leading F.B.I. officials to assume she was at his side. And she was a person with the kind of idiosyncrasies — a devotion to animals, the beauty parlor and monthly teeth cleanings — that might make her easier to find, they figured, especially given the assumption that the couple had altered their physical appearance with plastic surgery.

The F.B.I. doubled the reward for her capture — to $100,000 — and began broadcasting public service advertisements this week in 14 cities, during daytime television shows favored by older women.

The improbable end to a hunt that many people had long assumed had turned cold riveted his neighbors in Santa Monica, but even more so the people back in his old haunts in South Boston, where Whitey had been a legendary mobster — a hero to some, but loathed by many — who had helped define a Boston of old. The news that he had been caught, that he was still alive, was, for Boston, a hometown version of the killing of Osama bin Laden, who until last month shared with Mr. Bulger a listing on the F.B.I. fugitive list.

“I was shocked,” said Mary Child, 75, who grew up around the corner from Mr. Bulger in the Old Harbor Housing Project in South Boston. “It’s the end of an era.”

Paul McGrath, 47, a union stagehand and Teamsters member, said he hoped Mr. Bulger’s capture would remove what he believes to be a stain on the neighborhood where he was raised.