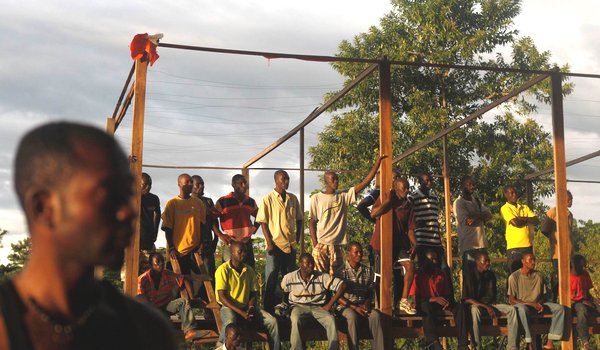 Haitians watching a soccer game in Iñapari, Peru, where hundreds of Haitians live in limbo after Brazil's immigration crackdown.

Brazil restricted Haitian immigration in January after about 4,000 Haitians made their way across the Americas to remote outposts in the Amazon, including hundreds who arrived around the end of 2011. Their arrival set off a debate over Brazil’s commitments to Haiti, the hemisphere’s poorest country, and what kind of immigrants Brazil should attract.

The authorities waded in, declaring that just 100 temporary work visas a month would be given to Haitians, at Brazil’s Embassy in Port-au-Prince, Haiti’s capital. Any new arrivals would risk deportation. The measures adopted in January would also make about 2,400 humanitarian visas available to Haitians who had recently arrived, allowing them to remain indefinitely and work in Brazil, in addition to about 1,600 visas already granted to Haitians who made their to Brazil after the 2010 earthquake in Haiti.

The move effectively curbed the influx. But it also shifted pressure across the border to Peru, where hundreds of Haitians have become stranded. And the measures opened Brazil to claims that its immigration policies were tilting the scales in favor of skilled professionals from rich countries, instead of poor foreign laborers, at a time of historically low unemployment, when many Brazilian companies are struggling to hire workers.

The authorities in Brazil say that the new rules are needed to prevent Haitians from falling victim to human traffickers and thieves during the long journeys that many have endured. They often flew from the Dominican Republic to Panama, then to Ecuador or Peru, before traveling by bus or on foot to Brazilian border outposts.

“We identified that there is a migratory route that was dangerous, that involved passing through many countries,” said Paulo Sérgio de Almeida, the director of the National Immigration Council of Brazil. He said the new measures would still allow some Haitians, and potentially their families, to come “calmly” to Brazil.

For other immigration specialists, however, the measures offer an example of shifting priorities. Senior officials in Brasília, the capital, recently signaled that they were planning to retool immigration policies to lure more skilled professionals, even as the government limits the entrance of Haitians.

Sebastião Nascimento, a sociologist at the University of Campinas in Brazil, said the new policies resembled efforts in the late 19th century and early decades of the 20th century, when Brazil emphasized European immigration as a way of “whitening” the country after the abolition of slavery in 1888.

“What exists now,” Mr. Nascimento said, “is an attempt to revive this infamous historical tradition of selective immigration.”

The authorities in the state of Acre, a place of entry for the Haitians in the Brazilian Amazon, have also differed with federal authorities on the issue. Acre’s attorney general sued in January to block the federal measures, arguing that Haitians making their way to Brazil should be granted the status of refugees, easing their entrance into the country.

The Haitian influx has become an important test for Brazil as it flexes its regional influence. Its robust economy attracts more immigrants from a range of countries, including poor neighbors like Paraguay and Bolivia, as well as Haiti. Brazil has stationed a peacekeeping force in Haiti since 2004, which it is now reducing. And President Dilma Rousseff addressed the immigration issue on a visit to Haiti last week, saying that Brazil remained open to Haitians, but that the new rules were needed to keep Haitians from falling victim to traffickers.

The federal government also recently sent more than $500,000 in aid to Acre and Amazonas, the two states where most of the Haitians have arrived, in an effort to lessen pressure there on services.

But some still want greater Haitian immigration, including manufacturers who find it difficult to hire workers.

“We buy from China, from Iran, Iraq, Japan, United States, Canada,” he said, referring to Brazil’s diverse trade ties. “Why not get workers from somewhere else? Labor should be globalized, just as business is globalized.”

Even so, some Brazilians publicly express skepticism about accepting the Haitians, reflecting feelings of isolationism not normally associated with Brazil. One commentator, André Forastieri, said that Brazil owed Haitians nothing, contending that European nations and the United States had contributed to Haiti’s problems.

In the meantime, hundreds of Haitians in Peru find themselves in limbo. About 300 are in Iñapari, a town of 2,800 people on Peru’s border with Brazil, where they are sleeping on the floor of a church and camping nearby.

“They are piling up here, and they are still arriving,” said Celso Curi, Iñapari’s mayor, by telephone. “Our basic services are scarce and our municipal budget is austere. This has become a huge problem.”

Barred from legally finding work in Brazil, some Haitians have ended up working the illegal gold mines of the Peruvian Amazon, said Ricardo Valdés, director of CHS Alternativo, a Peruvian human rights group. Some Haitians working the mines have reported being robbed of their money and passports. “They’re easy prey for the bands of human traffickers,” Mr. Valdés said.

Peru also issued a decree in January requiring Haitians to have a visa to enter. Still, human rights groups said it was not clear whether that would keep them out or simply shift the crisis to Ecuador, a country with historically relaxed immigration policies, where many Haitians have landed before finding their way to Brazil.

Facius Étienne, a Haitian construction worker stranded in Iñapari, said he had spent more than $3,000 on the odyssey from Haiti to the remote Peruvian town, finding himself sleeping on the floor of Iñapari’s church after Brazil’s new immigration measures went into effect. “We need help from Peru and Brazil, because we can’t turn back,” Mr. Étienne said by telephone.

Many of the Haitians already in Brazil have jobs, even if the salaries are sometimes disappointing. In one example, a pasta manufacturer in the southern state of Rio Grande do Sul hired a group of 14 Haitians, paying them the equivalent of $400 a month and covering housing costs.

Other Haitians in Brazil have been less fortunate. One Haitian in Manaus, the biggest city in the Brazilian Amazon, was fatally shot there in January. In Tabatinga, a town in the Brazilian Amazon where about 1,200 Haitians are still awaiting the processing of their work visas, a Haitian woman died in late January of dengue fever.