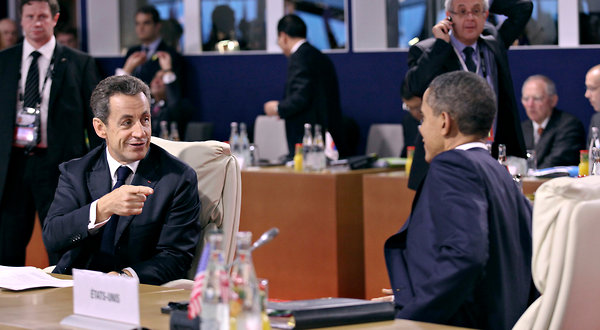 President Obama and President Nicolas Sarkozy of France on Thursday during the first working session at the Group of 20 summit meeting in Cannes, France.

“You are fed up with him, but I have to deal with him even more often than you,” Mr. Obama replied, according to reports that flooded the main Israeli news sites on Tuesday.

The Israeli prime minister’s office refused to comment. An Israeli official, speaking on the condition of anonymity for diplomatic reasons, acknowledged that given the once-close personal ties between Mr. Sarkozy and Mr. Netanyahu, “it all comes as a surprise.”

The publication of the comments, bound to embarrass all three allies, came at a delicate juncture hours before the imminent release of a significant report on Iran by the International Atomic Energy Agency.

Israel was expected to follow up with pressure for much tougher sanctions against Iran. Last weekend Israel’s president, Shimon Peres, exhorted Mr. Obama and Mr. Sarkozy, as well as other world leaders, to stand by their promise not to allow Iran to obtain nuclear weapons.

The remarks were first reported by a French Web site, Arrêt Sur Images, on Monday. They were subsequently confirmed by The Associated Press, which had a representative among those who overheard the conversation. Reuters also confirmed the comments.

A pool of reporters was in a separate location from the leaders, according to the agencies, waiting for the time when they would be allowed to monitor public remarks. The French reporters were given a device used to transmit simultaneous translations, but not headsets. But some plugged their own earphones in, catching about three minutes of the private conversation between Mr. Sarkozy and Mr. Obama, and the translation of each man’s comments into the other’s language, according to a reporter for The A.P.’s French service.

“It was brief and confusing,” the reporter said. “It was a private conversation in a separate room, and I could sense that they did not know they were being overheard.”

Both The A.P. and Reuters said that they did not initially report the comments because they were deemed off the record.

While Israeli and American officials routinely describe relations between the countries as unshakeable and strong, and Israel regards France as a friendly country, the comments clearly underscored frustration that has swirled from the failure to restart peace talks and avoid a confrontation at the United Nations and its agencies over the Palestinians’ request for recognition as a state. There have been periods of palpable tension between Mr. Obama and Mr. Netanyahu, mostly over continued Israeli construction in the West Bank and East Jerusalem.

The comments came at an inopportune moment for dealing with those issues as well. The State Department announced Tuesday that international mediators from the United States, Europe, Russia and the United Nations would meet separately with Israelis and Palestinians on Monday to discuss ways to resume talks on security and territory within a 90-day deadline that ends in December.

“We’ve had a cycle of action and reaction that we thought was counterproductive and difficult,” said the department’s spokeswoman, Victoria Nuland, adding that the next meetings were intended to “improve the atmosphere.”

For its part, France unexpectedly voted in favor of Palestine’s becoming a member of Unesco, the United Nations cultural heritage agency, on Oct. 31. Membership for Palestine was opposed by both the United States and Israel because it was seen as part of the Palestinian quest for international recognition as a state without a negotiated agreement. American laws dating to the 1990s mandated that the United States cut off funds to Unesco in response to the vote.

France explained that it believed that Palestine had the right to become a member of Unesco, “whose vocation is to work towards generalizing a culture of peace within the international community,” according to a news release from the French Consulate in Jerusalem.

France had also been pressing for a resolution allowing Palestine to raise its status in the United Nations to that of a nonmember observer state through a vote in the General Assembly, contrary to the position of both the United States and Israel, which opposed any Palestinian approach to the United Nations. The Palestinians decided to seek full membership from the Security Council instead. The council is also expected to consider a draft recommendation on Friday on their request for recognition, but its 15 members are deadlocked over the request, and the United States has vowed to veto it if necessary.

Describing the longstanding acquaintance between Mr. Netanyahu and Mr. Sarkozy, the Israeli official said that the two were introduced by a mutual friend and had gotten to know each other while Mr. Sarkozy was the mayor of Neuilly-sur-Seine. The official added that the two used to go out to dinner in Paris and in Israel during Mr. Sarkozy’s visits here.