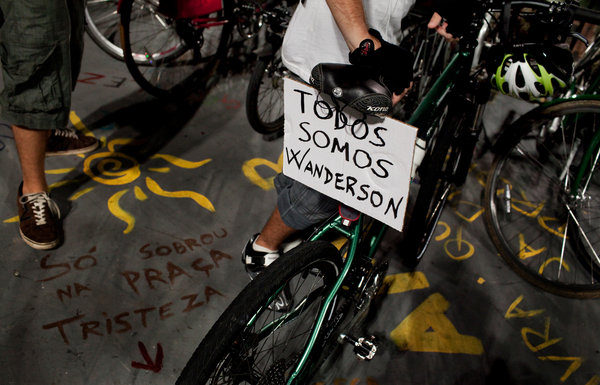 A protest of cyclists after the death of Wanderson Pereira dos Santos. The sign reads “We are all Wanderson,” in Portuguese.

Thor Batista, the 20-year-old son of Brazil’s richest man, was driving back one night in March from a meal at a steakhouse in the mountains above Rio. He was on a highway at the steering wheel of his father’s $1.3 million sports car, a Mercedes-Benz SLR McLaren.

Wanderson Pereira dos Santos, 30, who lived in a shack at the highway’s edge and worked unloading trailer trucks, was on his bicycle, on an errand to buy flour. His wife was preparing to bake a cake. They were celebrating her birthday.

When Mr. Batista’s McLaren suddenly smashed into Mr. Pereira dos Santos, killing him instantly, it was clear that more than the two men collided on that stretch of highway.

Two Brazils also met head-on: one in which a small elite live with almost unfathomable wealth, and another in which millions eke out an existence on the margins of that abundance.

“There have been so many people run over that I’ve lost count,” said Caubi Lopes, 49, a manual laborer who knew Mr. Pereira dos Santos and lives near the site of the car crash, in Duque de Caxias, on Rio’s outskirts. About 100 families live there in shacks wedged into a slope near the highway.

“It’s only this case that has gotten so much attention because of that man,” said Mr. Lopes, referring to Mr. Batista’s father, Eike Batista, a mining magnate with a $30 billion fortune who used to park the McLaren in the living room of his mansion.

Roadside deaths are so common that they rarely register with such national prominence. By various measures, Brazil is grappling with a surge in traffic fatalities. The country registered more than 40,600 traffic deaths in 2010, a nearly 25 percent increase from 2002.

Just on the highway where Mr. Pereira dos Santos was killed on March 17, at least 391 people were hit by cars in last five years, a police spokeswoman said.

But the crash that killed Mr. Pereira dos Santos has awakened a debate over wealth, influence and traffic deaths, similar to a Chinese case in 2010 in which the son of a powerful official struck a poor farm girl, stirring an outcry.

Brazil has made strides in reducing its income inequality, lifting 40 million people into its middle class in recent years, but it still ranks among the most unequal of nations.

“I don’t understand why rich parents encourage their young and inexperienced children to drive machines incompatible with our roads,” said Ruth de Aquino, a columnist at the magazine Época, in an essay about Thor Batista. “We’re not in Germany; we don’t have autobahns.”

Cléber Carvalho Rumbelsperger, the lawyer for the victim’s family in this case, said in the days after the crash that witnesses contended that Mr. Pereira dos Santos was hit on the shoulder of the highway when Mr. Batista was trying to pass a bus. But Mr. Batista and his father each presented a starkly different version of what happened.

“The cyclist’s carelessness could have caused three deaths,” said the elder Mr. Batista, 55, in a Twitter message a day after Mr. Pereira dos Santos was buried. He said that both his son and a friend riding in the two-seat McLaren could have been killed.

Using a new account publicized by his father, who has almost 700,000 followers on Twitter, the younger Mr. Batista also took to the Web site. He posted dozens of messages, contending that Mr. Pereira dos Santos had been in the highway’s left lane. He also said that he was driving within the speed limit, while boasting of his skills as a motorist.

“I drive cars with automatic transmission with one foot on the accelerator and the other on the brake, which makes a much faster reaction possible,” Thor Batista said in one message.

He explained in other messages that he suffered cuts after Mr. Pereira dos Santos’s body crashed into the windshield, and he told his lawyer to contact the victim’s family to offer help, including paying for a funeral.

He also said he had never been in a car accident. But the newspaper O Globo reported that he had actually collided with a cyclist in Rio last year while driving an Audi, fracturing the pelvis of an octogenarian.

Thor Batista also described on Twitter how he left the scene of the most recent crash, leaving a bodyguard to represent him. He said a nurse told him he needed to be examined in a hospital. He said that he went to his home in the exclusive district of Jardim Botânico instead, at the suggestion of his family’s doctor.

Once at home, Mr. Batista said he opted to return to site where Mr. Pereira dos Santos had been killed. Arriving at a police station, he asked to take a breathalyzer exam, which revealed no alcohol in his system. After filling out a report, the police authorized him to return home.

But some Brazilians wonder why Mr. Batista had been allowed to drive that day in March in the first place. The television network Globo reported that over 18 months he had received more than 50 fines associated with his driver’s license, including numerous penalties for speeding violations, a total that would normally result in a suspended license.

The investigation continues. Even though no charges against Thor Batista have been filed, some of Brazil’s top lawyers have been hired to defend him, insisting that he is innocent. The lawyers also point to an autopsy showing that Mr. Pereira dos Santos had consumed alcohol before the crash.

“Thor Batista complied with all of the duties of a good citizen,” Celso Vilardi, one of Mr. Batista’s lawyers, said.

Survivors of Mr. Pereira dos Santos, including his wife and aunt, declined to comment, citing the advice of their lawyer, who said he was seeking a financial settlement. They met personally with the younger Mr. Batista on March 22. Eike Batista said in a statement that his son and he shared the family’s sadness and would help them with “all the necessary assistance.”

The collision has focused attention on the heir to one of Brazil’s largest fortunes. A 2011 profile of the younger Mr. Batista in the newsmagazine Veja described club-hopping jaunts to São Paulo aboard a Gulfstream jet. He said that he was relatively restrained, never spending more than about $3,300 a night, and expressed his lack of interest in reading unless the themes included cars, bodybuilding and finance.

Eike Batista, meanwhile, is vehemently defending his son, making it clear on Twitter that he would use all the means at his disposal in the case. “I only hire the best,” he said, referring to his move to hire a former justice minister to represent his son. “That a problem?”