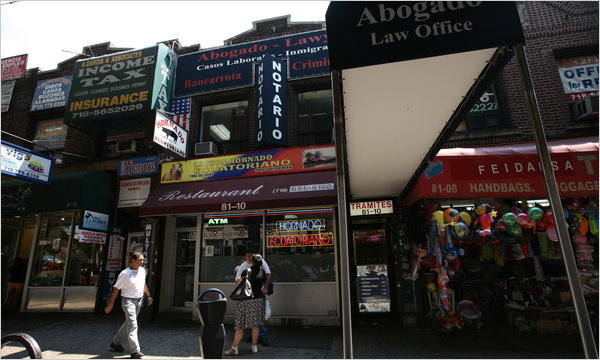 Notarios may handle everything from money transfers to immigrants' applications for asylum. 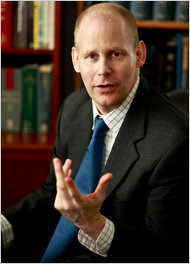 “Maybe you had to leave because someone threatened to kill you,” the man suggested. “Because of something that your father did to somebody else or something to do with the land. You understand? That can be a way to get asylum.”

Often enough, it is. A shadowy industry dedicated to asylum fraud thrives in New York, where many of the country’s asylum claims are filed. Immigrants peddle personal accounts ripped from international headlines, con artists prey on the newly arrived and nonlawyers offer misguided advice.

The revelation that the West African hotel housekeeper who accused Dominique Strauss-Kahn of sexual assault apparently lied on her asylum application has focused new attention on the use of these schemes.

The embellished stories go in and out of fashion along with the news of the day, reflecting turmoil in nations around the globe, lawyers say.

West Africans claim genital mutilation or harm from the latest political violence. Albanians and immigrants from other Balkan countries claim they fear ethnic cleansing. Chinese invoke the one-child policy or persecution of Christians, Venezuelans cite their opposition to the ruling party, and Russians describe attacks against gay people. Iraqis and Afghans can cite fear of retaliation by Islamic extremists.

Of course, thousands of those claims are legitimate. But each cataclysm provides convenient cover stories for immigrants desperate to settle here for other reasons, forcing authorities to make high-stakes decisions based on the “demeanor, candor or responsiveness” of the applicant. “When there’s a problem anywhere, a horrible slaughter in Somalia, wherever, the first couple of years of those cases are very real,” said Andrew Johnson, an immigration lawyer in Manhattan. “Then the next four or five years, they just mimic those stories.”

There is no reliable data on the pervasiveness of asylum schemes, but law enforcement officials say they are among the most common immigration frauds, and the hardest to detect and investigate. “Fraud in immigration asylum is a huge issue and a major problem,” said Denise N. Slavin, an immigration judge in Miami who is vice president of the National Association of Immigration Judges.

Mr. Strauss-Kahn’s accuser said in her 2004 asylum bid that she was gang-raped, and that soldiers destroyed her home, beating her and her husband, who she said died in jail. She recently admitted to prosecutors that she had been lying.

Her lawyer, Kenneth P. Thompson, said she was desperate to leave Guinea, and had been encouraged to exaggerate her claims. She told Manhattan prosecutors that a man had given her a recording of the asylum story to memorize.

The accuser’s immigration case is apparently not unusual.

A woman from Burkina Faso who lives in Harlem said she had recently acted as an interpreter for a woman from another African country, Mali. The woman had undergone genital mutilation, but told her lawyer she suffered no side effects. In court, the interpreter said, the Malian woman changed her story.

“People would lie to stay here because they don’t want to be sent back home,” the interpreter, who spoke on the condition of anonymity because she did not want to implicate anyone, said.

Amadou Diallo, the street vendor from Guinea who was shot 41 times by New York police officers in 1999, came from a well-off, stable family. But he told immigration authorities that he was from nearby Mauritania, and that his parents had been killed in that country’s conflict.

It was not true, but he was granted asylum. The scheme was revealed after his death.

Every immigrant neighborhood has businesses that guide newcomers — many of them here illegally — through the complicated process of gaining legal status. Sometimes that means claiming asylum in immigration court, one of several ways to receive it.

Some of them employ legitimate lawyers. Many do not.

“Often, the applicant is misled by various actors with a story that is much more compelling,” said Claudia Slovinksy, a longtime immigration lawyer. “Weren’t they soldiers? Wasn’t it a gang rape?”

Whether here legally or illegally, immigrants can apply for asylum within one year of arriving. To qualify, they must show a well-founded fear of persecution on account of race, religion, nationality, political opinion or membership in a particular social group — which could cover gays or abused women.

Immigration courts across the country granted 51 percent of asylum claims last year, government statistics show. Such courts in New York City, which heard more cases than in any other city, approved 76 percent, among the highest rate in the nation.

Because many claims are based on events that occurred in countries in disarray, with evidence hard to collect, judges have to make decisions based on intuition.

“A true refugee does not have a note from their dictator,” said Judge Dana Marks, president of the National Association of Immigration Judges, paraphrasing a legal aphorism.

She said many judges erred on the side of caution. “The mistake of granting a fraudulent asylum case is far less disastrous than denying a genuine one,” she said.

The Manhattan lawyer peddling Albanian blood feuds, James Christo, who was caught on a wiretap, is one of the few people who have been prosecuted recently for helping immigrants commit fraud. He and his wife, Remila, were sentenced in 2009 to five years’ probation in a case brought by the United States attorney’s office in Manhattan.

Stan Weber, who worked for 14 years as a government lawyer in immigration court, said he had learned the signs of stock stories. The immigrants’ words mirror the language in the written application. The applicants do not know basic information about their country or church. “They sound scripted,” he said.

Some frauds are sophisticated, with doctored documents, false identities and fake medical records. Others are less so.

Mr. Johnson, the Manhattan immigration lawyer, said a Russian client asked for help recently with an asylum claim that had been prepared by a lawyer in Brighton Beach, Brooklyn, the center of the city’s Russian immigrant community.

The forms said she was gay and feared persecution back home — a new trend among Russians claiming asylum, Mr. Johnson said.

When he began asking questions about her romantic history, she bristled.