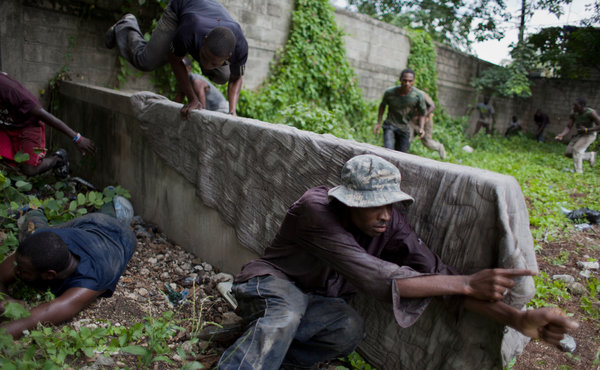 The Organization of Demobilized Soldiers for the Reconstruction of Haiti trains weekly on the outskirts of Port-au-Prince.

A recruit got a shave during the weekly training of the Organization of Demobilized Soldiers for the Reconstruction of Haiti.

Drenched in sweat and muck after drilling with fellow army hopefuls, he said he was ready to join the Haitian military — that is, if there was one.

“Things are not easy here in Haiti,” said Mr. Robeson, 35, and, like several of the prospects, unemployed. “We need something to do.”

Whether that something should be a new military has raised alarm both here and abroad. The military was disbanded over human rights abuses in 1995 by President Jean-Bertrand Aristide after years of political turmoil, making Haiti one of a handful of countries without an army.

But now President Michel Martelly is pledging to revive it, pressing forward with a plan to reconstitute the Haitian military as a kind of national guard or civil defense force to supplement the weak national police.

His $95 million proposal calls for an initial force of 3,500 personnel to patrol the border, help put down civil unrest and provide badly needed employment to legions of young people. It sets aside $15 million to compensate former soldiers who have long complained they are owed a pension.

A draft circulated last month to diplomats from donor nations was promptly leaked, a sign of disquiet among many who recall the military’s involvement in coups and question its priority in a country still reeling from the January 2010 earthquake.

Even members of Parliament supportive of the idea as a matter of national pride — and, like many citizens here, frustrated over high crime — doubt there is support to finance the proposal. The Constitution calls for an armed defense force, so Mr. Martelly may already have the legal authority he needs. Indeed, former members argue they are technically still on duty. But Parliament members believe that they would control something just as important: the purse strings.

“Our generals started the country in 1804,” said Jean Rodolph Joazile, a former military officer and the president of the Senate, referring to the slave rebellion that gave birth to independence from France. “But the army I belonged to was not professional. Now we have to see what our needs are. Is there a priority to have an army now?”

The United Nations has long planned to eventually replace the peacekeepers here with a fortified national police force, and this month the Security Council cut the maximum size of the peacekeeping contingent to 10,581 from 13,331. But the earthquake set back the development of the police force, which stands at 10,200 for a population of 10 million, less than half the size it should be, said the police chief, Mario Andresol.

Chief Andresol, also a former army officer, declined to say whether he supported Mr. Martelly’s plan but said, “We need to develop the police force to see how far we can go with what we have.”

The United Nations has decided to reduce its peacekeepers to pre-quake levels — a decision Mr. Martelly opposed given lingering crime problems — and popular sentiment has soured on them. One unit from Nepal is believed to have brought cholera to the country, while peacekeepers from Uruguay are accused of sexually abusing an 18-year-old Haitian man. Both issues have set off protests here.

That current of mistrust and animosity helps fuel the ad hoc groups of former soldiers and aspiring ones, and it may also buttress Mr. Martelly, who campaigned on promises to reduce international influence and restore Haitian pride. He sent word to Parliament that he plans to name a general staff by Nov. 18, a military holiday, though he has not formally announced his plan.

Mr. Martelly, a dropout of the national military academy, visited one group in November in a camp near here as a presidential candidate and was greeted with a ceremony of salutes and parading, said Nestor Appolon, the commander of the group.

“He came to cheer us up and encourage us and said he supported having an army,” said Mr. Appolon, of the National Coordinate of the Restructured Military, which began as a camp for earthquake survivors run by former military officers and is now one of several loosely connected groups pushing for a new army.

Mr. Arthiste belongs to another group, the Organization of Demobilized Soldiers for the Reconstruction of Haiti, which trains weekly on the grounds of an abandoned nightclub on the outskirts of Port-au-Prince, the capital. It, too, is led by former military officers, who insist that their only aim is to help rebuild and secure the country, not destabilize it.

They are sketchy on the question of weapons. None were visible during a training session last weekend, but one of the group’s leaders, Daniel Esperance, 53, a former corporal, said, “We don’t have weapons now, but one day if we are in danger we will find them.”

Weapons training seemed a distant concern during the weekend training session. The recruits had enough trouble marching in time, with several hitting the deck for pushups to pay for errors.

Getting their heads shaved, a few initially resisted before succumbing to the razor. “This is a tet kale movement!” one of the “barbers” called out, using the term for bald head, which also happens to be Mr. Martelly’s nickname.

Mr. Esperance said the members — around 2,000, he estimated, though about 100 were present for the training Saturday — donate what they can for lunch and uniforms, camouflage pants, gray T-shirts and boots.

The recruits seemed as interested in future employment as defending the country. Several are not long out of school and said they never held formal jobs, common in a country where about two-thirds of the population is unemployed. “We are poor people, we need income,” said Frederic Markendy, 28, a trainee. “The army is one way. What makes a country? An army.”