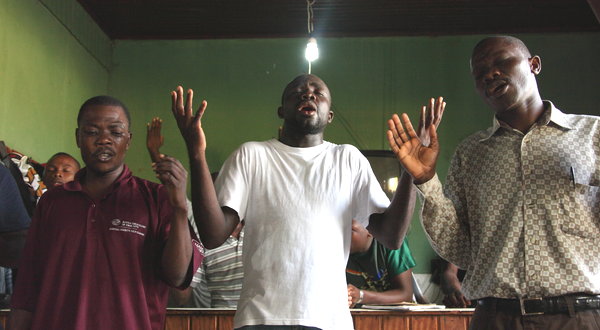 In Brasiléia, Haitians prayed in their hotel. More Photos »

Months ago, he boarded a bus in Haiti, before getting on a plane in the Dominican Republic, landing first in Panama and then in Ecuador. That was where his wife gave birth to their son, Isaac, he said, bouncing the 4-month-old infant on his knee and brandishing the boy’s Ecuadorean identification card. Then they continued by bus yet again, through Ecuador and Peru. Next, they trekked by foot in Bolivia, where, he said, the police robbed him and his wife of their clothing and their life savings: $320 in cash.

“Then we finally got to Brazil, which I’m told is building everything, stadiums, dams, roads,” said Mr. Saint-Fleur, 27, a construction worker, one of hundreds of Haitians who gather each day around the gazebo in Brasiléia’s palm-fringed plaza. “All I want is work, and Brazil, thank God, has jobs for us.”

Gambling everything, thousands of Haitians have made their way across the Americas to reach small towns in the Brazilian Amazon over the past year in a desperate search for work, including a surge of hundreds arriving in recent days amid fears that Brazil’s government could slow the influx before it overwhelms the authorities here.

Their improbable journeys — from the rubble of their island homes to remote outposts here in the Amazon — say as much about the dire economic conditions that persist in Haiti two years after the earthquake as it does about the rising economic profile of Brazil, which is fast becoming a magnet not only for poor foreign laborers but also for growing numbers of educated professionals from Europe, the United States and Latin America.

Upon arriving here and in other border outposts, the Haitians are often given vaccinations, clean water and two meals a day by the authorities. Many stay for weeks in Brasiléia and other towns before being granted humanitarian visas that allow them to work in Brazil.

But with such a crush of new arrivals, others have not been so lucky. After traveling thousands of miles and overcoming countless obstacles, some crowd eight to a small hotel room or wind up sleeping on the streets, almost reliving the misery they had hoped to leave behind.

“I cannot allow the sadness to take over, since opportunity will follow this hard phase,” said Simonvil Cenel, 33, a tailor awaiting a visa who leads animated evangelical prayer services for those stuck in limbo after enduring so much to get here.

About 4,000 Haitians have immigrated to Brazil since the 2010 earthquake, often going first through Ecuador, a poorer country with lax visa policies. Brazil has made an exception for Haitians in contrast to job-seekers from nations like Pakistan, India and Bangladesh, who arrive via similar Amazonian routes but are usually expelled.

“Haiti is recovering from an extreme period of crisis, and Brazil is in a position to help these people,” said Valdecir Nicácio, a human rights official in the state of Acre, encompassing Brasiléia. “Before getting here, they are at the mercy of human traffickers,” he said. “Brazil is big enough to absorb Haitians who just want jobs.”

With the number of Haitians sharply increasing in recent days, the authorities in Brasiléia and Tabatinga, a border city in Amazonas State, have warned of the strains of trying to feed and house the Haitians while visa applications are reviewed. Federal officials have responded by sending tons of food for the Haitians, who currently number more than 1,000 in each border settlement.

Dealing with an immigration crisis on its border is a new dilemma for Brazil, which until recently was more concerned with the outflow of its own citizens seeking opportunities in rich industrialized countries than responding to the arrival of thousands of impoverished foreigners.

Though economic growth has recently slowed in Brazil, unemployment remains at a historic low of 5.2 percent, and many companies have trouble finding enough workers to fill vacancies. Wages have also climbed for those at the lowest rung of the job market, with the income of poor Brazilians growing seven times as much as the income of rich Brazilians from 2003 to 2009.

“We were experiencing a decline in our work force because so many Brazilians are going to work at the two hydroelectric projects,” said Ana Terezinha Carvalho, the personnel management analyst at Marquise, a company in Porto Velho. The city lies in the upper Amazon River Basin, where Brazil is employing thousands to build two big dams, called Jirau and Santo Antônio.

Ms. Carvalho said her company quickly hired 37 Haitians who arrived last year, to collect trash in Porto Velho and take it to the city’s landfill. Some make more than $800 a month, in a job that includes benefits like health insurance, overtime and paid holidays. “There weren’t enough Brazilians, so we were happy to hire the Haitians,” she said.

The authorities estimate that about 500 Haitians now live in Porto Velho and that about 700 are in Manaus, the largest city in the Brazilian Amazon. Hundreds more have made it to São Paulo, Brazil’s economic capital. Companies like Fibratec, a swimming pool manufacturer in southern Santa Catarina State, have even sent managers all the way here to hire dozens of Haitians.

In addition to meeting demand for cheap labor, the effort to let Haitians work in Brazil speaks to the country’s ambitions of wielding greater regional influence, by attempting to find ways of alleviating problems in the hemisphere’s poorest nation.

Since 2004, Brazil has sent troops to lead a United Nations peacekeeping mission in Haiti. But there are now more Haitians in Brazil than Brazilian soldiers in Haiti. In September, Brazil announced that it would start drawing down its 2,000 troops in the Caribbean nation.

Most of the Haitians hope to spend just a few weeks in Brasiléia’s immigration limbo, before moving on. Some, like Francisco Joseph, 25, make the most of the time here. He buys prepaid cellphone cards across the bridge in the Bolivian city of Cobija and sells them to fellow Haitians in Brasiléia’s plaza at a markup of about 30 cents a card. He makes as much as $10 a day.

Others, like Jacksin Etienne, 31, nurture bigger dreams. A polyglot who glides with ease between English, Spanish, French and Creole, Mr. Etienne said he hoped to work as a translator or in a hotel.

“I want to go straight to São Paulo, the New York of South America,” he said. “Brazil’s a rising kind of place, and it needs people like me.”