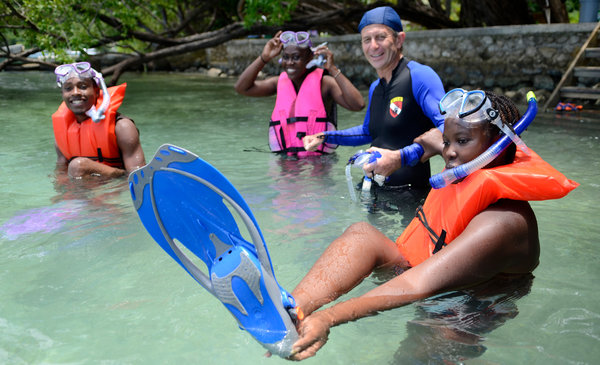 Jessika Laloi, front, before a dive off Haiti’s coast.  Behind her was Gregor Hodgson of Reef Check.

Ruin and Hope on Haiti’s Reefs 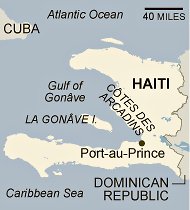 Off La Gonâve Island is a wasteland of dead coral.

Only one thing stood in their way: For most of them — like Jessika Laloi, 21 — this was their first time swimming in the ocean. Until a few months ago, Ms. Laloi had not even known how to dog paddle.

Now she was wading into the ocean in shorts and a tank top, with a life preserver strapped to her torso, a welcome distraction from the tumult of life since her home collapsed in the earthquake a year and a half ago.

“Diving and swimming is a way of showing you that you are in the environment,” Ms. Laloi said. “You are part of it. You don’t have to destroy it.”

Environmental degradation is rife in Haiti — deforestation, erosion, pollution — and for the most part it is hard to miss. But for decades the country’s marine environment has suffered unseen. Its extensive coral reef system, an attraction to foreign scuba divers in the 1970s and ’80s, has largely died off — partly from sedimentation and climate change, but mostly from overfishing.

“It’s probably the worst overfishing I’ve seen anywhere in the world,” said Gregor Hodgson, the director of Reef Check, a nonprofit organization in California that monitors reef health around the globe. Mr. Hodgson, who has been leading the training of Ms. Laloi and her fellow Haitians, said his organization had worked on reefs in 90 countries.

Months after the earthquake that devastated Port-au-Prince, this nation’s capital, Mr. Hodgson flew to Haiti to inspect reefs, checking for quake damage. Instead, he found something more alarming: dead coral as far as the eye could see, and almost no fish. He estimates that about 85 percent of the coral reef has died.

In Haiti 54,000 fishermen rely on the ocean for their livelihood, according to the Ministry of Agriculture, which oversees fisheries management. In recent decades, as their usual catches of Nassau groupers and snappers have dwindled and disappeared, many of them have subsisted by netting and spearing small reef fish that keep coral clean of algae. Now those too are almost gone, and the algae have taken over.

On a recent dive near La Gonâve Island, Mr. Hodgson floated through a wasteland of intact, dead coral, overgrown with algae and sponges and nearly devoid of fish.

Haiti has the second-longest coastline of all the Caribbean countries, yet it is the only one that has not established marine protected areas where fishing is restricted or off-limits, according to the United Nations Environment Program. So Reef Check decided to survey the reefs and propose that the Haitian government create marine parks where fish can feed, grow and reproduce.

“It’s an unusual situation to come into a country where there are no marine ecologists with respect to coral reefs and no marine biology programs in universities,” Mr. Hodgson said. “We’re starting from square one.”

Pierre Guy LaFontant, Haiti’s director general of fisheries, acknowledged that overfishing was a problem and said that officials were receptive to the idea of establishing protected waters. But if the government cannot enforce its existing fishing regulations, can fishermen be persuaded to abide by an invisible line in the water?

“That would be my deepest dream,” Mr. LaFontant said, “but the reality is totally different. For fishermen, there are no alternatives. Poverty is the law.”

Henry Hilaire, who has fished for 36 years, gathered nets from a sailboat with several other Haitians in waters that Reef Check hopes will eventually be protected.

“We don’t find enough,” Mr. Hilaire said of his catch, “but we have to take what we found. It’s not enough fish for us to make a living.”

Mr. Hilaire pulled two small fish, each about five inches long, from his basket. “It’s really too young to keep,” he said, but “circumstances are such that if we didn’t keep them, we’d go hungry.”

Many of Reef Check’s divers in training were sympathetic to the fishermen’s plight.

“They’re desperate, trying to survive, so how do you tell them not to fish here?” asked Romain Louis, 37, a literature teacher hoping to become part of the eco-diver team.

Under Reef Check’s guidance, once volunteers demonstrate proficiency in swimming and snorkeling, they will eventually be taught to scuba dive, map the reefs foot by foot and count crucial species of fish, urchins and lobsters — basically, anything people like to eat.

The organization began recruiting volunteer divers earlier this year. Yet the going has been slow. According to Mr. Hodgson, only one of 30 applicants selected for a pool test in April could swim half its length. The rest could not swim at all.

But what the volunteers lack in experience, they make up for in passion and curiosity.

“It’s exciting,” Melissa Barbot, 24, an architecture student, said after a snorkel outing. “This is my first time, and naturally, I’m having this wow feeling.”

For some students, learning to dive has also proved to be therapeutic.

“When I saw how amazing it is,” Ms. Laloi said of her time in the water, “I just forgot that I live in a very ugly zone.”

Before the quake, Ms. Laloi had been a university student majoring in medicine. When the quake struck, she recalled, she leaped from the second story of her house as it was collapsing around her. Afterward, she lived with her aunt in a tent and volunteered with the Red Cross, tending to the injured.

“My hair began falling out, and I gained lots of weight — I was big,” she said. “The psychologist said it was stress.”

At the end of her third day of lessons with Reef Check, Ms. Laloi climbed out of the water, elated and slightly out of breath.

“It was like a relief,” she said, looking back at the ocean. “When I was down there, I just forgot about the earthquake. I forgot everything, my sadness, everything. It was like I was living a new life.”

“I will come here very, very often so I can see the ocean,” she added. “I think the fish are happy to see me.”

Reprinted from The New York Times, International, of Friday, September 2, 2011.