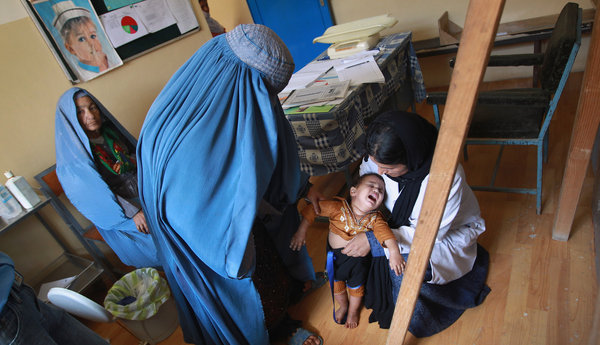 A mother brought her son for treatment at an American-financed clinic in Farza, Afghanistan.

As lawmakers scramble to trim the swelling national debt, both the Republican-controlled House and the Democrat-controlled Senate have proposed slashing financing for the State Department and its related aid agencies at a time of desperate humanitarian crises and uncertain political developments. The proposals have raised the specter of deep cuts in food and medicine for Africa, in relief for disaster-affected places like Pakistan and Japan, in political and economic assistance for the new democracies of the Middle East, and even for the Peace Corps.

The financial crunch threatens to undermine a foreign policy described as “smart power” by President Obama and Secretary of State Hillary Rodham Clinton, one that emphasizes diplomacy and development as a complement to American military power. It also would begin to reverse the increase in foreign aid that President George W. Bush supported after the attacks of Sept. 11, 2001, as part of an effort to combat the roots of extremism and anti-American sentiment, especially in the most troubled countries.

Given the relatively small foreign aid budget — it accounts for 1 percent of federal spending over all — the effect of the cuts could be disproportional.

The State Department already has scaled back plans to open more consulates in Iraq, for example. The spending trend has also constrained support for Tunisia and Egypt, where autocratic leaders were overthrown in popular uprisings. While many have called for giving aid to these countries on the scale of the Marshall Plan that helped rebuild European democracies after World War II, the administration has been able to propose only relatively modest investments and loans, and even those have stalled in Congress.

“There is a democratic awakening in places that have never dreamed of democracy,” Mrs. Clinton said on Friday. “And it is unfortunate that it’s happening at a historic time when our own government is facing so many serious economic challenges, because there’s no way to have a Marshall Plan for the Middle East and North Africa.”

With the administration and Congress facing a deadline for still deeper cuts in spending, government programs across the board face the ax, from public education to the military, but proposed cuts to the State Department and foreign aid come on top of an $8 billion reduction in April, the single largest cut to any one department under the deal that kept the government from shutting down.

Representative Kay Granger, a Republican from Texas and chairwoman of the House appropriations subcommittee overseeing foreign affairs, said that the budget crisis was forcing “a fundamental change” in how foreign aid is spent. Lawmakers and officials, she said, needed to prioritize spending according to American national security interests and justify those decisions to Americans who are generally skeptical of foreign aid.

She recalled a State Department envoy’s informing her of $250 million in relief to Pakistan after last year’s devastating floods. “I said I think that’s bad policy and bad politics,” she said in an interview at her office on Capitol Hill. “What are you going to say to people in the United States who are having flooding?”

Spending on international affairs, including foreign aid and the State Department’s operating budget, reached $55 billion in the 2010 fiscal year, Mr. Obama’s first full year in office, but declined by the end of the 2011 budget to $49 billion.

The administration proposed spending $59 billion in the fiscal year that began on Saturday, including $8.7 billion in a newly created contingency account for operations in Iraq, Afghanistan and Pakistan. Those operations will expand significantly when the State Department takes over more tasks as American troops withdraw from Iraq at the end of the year and prepare for a drawdown in Afghanistan beginning next summer.

While the final budget for the year remains uncertain given the politics surrounding the special Congressional committee charged with finding more than $1 trillion in cuts over all, it is clear that foreign aid will decline for a second year.

“We’re going to have to do more with less — or less with less, depending on how you look at it,” said Deputy Secretary of State Thomas R. Nides, who oversees the department’s budget and operations.

Even the Senate’s version, passed by its Democratic majority, cuts the Obama administration’s request to $53 billion. Setting aside the rise in contingency spending in Iraq as the American Embassy bolsters its security in anticipation of the troop withdrawal, the Senate’s proposal would amount to a reduction in everything else.

Both versions cut spending across the board, and around the world. The House’s plan also reflects longstanding Republican views on matters of policy, for example by prohibiting financing for organizations that perform abortions or provide needle exchanges. It would also cut American contributions to international organizations like the United Nations and its Human Rights Council, the World Bank and the World Health Organization.

The Republicans also attach conditions on aid to Pakistan, Egypt and the Palestinians, suspending the latter entirely if the Palestinians succeed in winning recognition of statehood at the United Nations. However, one of the largest portions of foreign aid — more than $3 billion for Israel — is left untouched in both the House and Senate versions, showing that, even in times of austerity, some spending is inviolable.

The last time American foreign aid declined so significantly was in the 1990s, after the end of the cold war and the fight between Democrats and Republicans that led to a balanced budget under President Bill Clinton.

John Norris, a former official at the State Department and the Agency for International Development, or U.S.A.I.D., said that the country could “be much more selective” in delivering aid “without doing much harm to the national interest.”

But Mr. Norris warned that cutting too deeply could return the United States to the inward-looking era before the Sept. 11 attacks, after which many people believed that the country had done too little to address the roots of extremism.

“We need to be a little less scattershot,” said Mr. Norris, who is now with the Center for American Progress in Washington. “Every ambassador wants to announce something or preside over a ribbon cutting, but in this environment that is no longer possible.”

Jeremy Konyndyk, the director of policy and advocacy for the international aid group Mercy Corps, said that a retrenchment in aid could gravely erode not only America’s influence but also its moral standing as a generous nation in times of crises.

“The amount of money the U.S. has or doesn’t have doesn’t really rise or fall on the foreign aid budget,” he said in a telephone interview from Nairobi, Kenya, where he was overseeing relief to the famine in the Horn of Africa. “The budget impact is negligible. The impact around the world is enormous.”