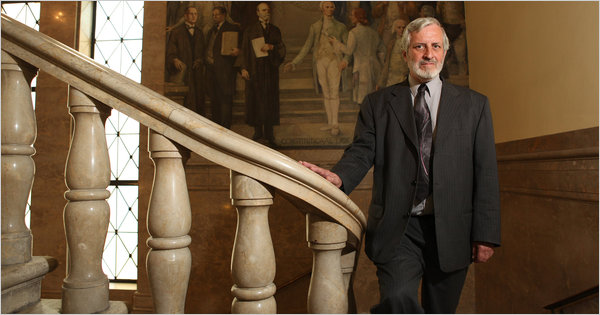 Justice Thomas D. Raffaele, of State Supreme Court in Queens, has volunteered to preside over same-sex marriages on Sunday, July 24, the first day they will be allowed in New York State.

Rosalyn H. Richter, an appellate judge in Manhattan, also plans to volunteer. “It’s special as a judge, and as a lesbian judge, to be able to do something for people that makes them genuinely happy.”

“I’ve heard there are a lot of people who are very excited,” he said.

As one of several dozen judges across the state who have volunteered to play an official role in the new law’s first day, Justice Raffaele is part of one of the most unusual judicial mobilizations in years. From Buffalo to the Bronx and pretty much everywhere else in New York, judges are signing up for rare Sunday duty.

If same-sex couples want to marry that Sunday, only judges would have the authority to dispense with the 24-hour waiting period required by law. And those judges could then officiate on the spot.

In interviews, judges with a range of political perspectives said that for them, volunteering to work that day was public service. Judge Richard B. Meyer of Essex County Court in Elizabethtown, N.Y., said he felt an obligation to help any couple trying to take advantage of their newly minted right.

“I think it’s important,” Judge Meyer said, “that people who have been waiting a long time to be married and who are anxious to do it have access to someone who is able to perform the ceremony on their time frame.”

In Rochester, Judge Joan S. Kohout said she had been thinking of the legal changes during her 23 years on the bench that enabled same-sex couples to adopt. As ideas about family have changed, she said, the families passing through her court have changed.

Judge Kohout volunteered, she said, because she saw the new marriage law as a further evolution. “I’m a Family Court judge — I’m a judge for families — and I saw this as a way for me to do my job,” she said.

Court officials said arrangements were still being formulated with local officials in New York City and around the state. But they said they were gathering lists of volunteer judges in the five boroughs and in every area of the state, though some upstate clerks’ offices have not announced plans to open to issue marriage licenses that day.

Judges who oppose same-sex marriage may be unlikely to volunteer. But in the interviews, several judges who are volunteering carefully avoided any suggestion that they were making a statement on their personal views of the marriage law.

“It’s the law in the state of New York, and it’s our obligation to adhere to it,” said James C. Tormey, the administrative judge for a district of six counties in the Syracuse area, who said he and other judges would be available to handle requests for weddings on July 24.

Judges generally decline to discuss their views of issues that may come before them, because of ethical rules, and cases dealing with aspects of the new law remain possible. And some ethics specialists said judges needed to be careful that their participation in what could be a politically tinged event did not become a public statement of their views about same-sex marriage.

But offering to conduct weddings “is not necessarily an expression of their view,” said Ellen C. Yaroshefsky, director of a center on legal and judicial ethics at the Cardozo School of Law at Yeshiva University. Professor Yaroshefsky compared the judges’ Sunday duty to judges’ volunteering to deal with voting rights complaints during the civil rights era.

But, no matter how lofty the goal, some judges said, there are also nuts-and-bolts issues to consider, including whether a judge at a wedding of two men should say, “I now pronounce you husband and husband.”

Lynda B. Munro, a judge in Connecticut, where same-sex weddings have been conducted since 2008, said she had pronounced people “husbands together” or “wives together.”

Judge Meyer of Essex County Court in New York said he had been thinking that simply pronouncing people “married” would work.

However the ceremonies unfold on July 24, each of the weddings will have its own back story, like that of Jo-Ann Shain and Dr. Mary Jo Kennedy, who have been together for 29 years.

The ruling was later overturned. But this week Justice Ling-Cohan said she had offered through a lawyer who handled the case to marry each of the five couples. Ms. Shain, a medical editor, said she and Dr. Kennedy, a physician, were touched by the offer but declined because they already have plans for July 24. She said they hoped to invite Justice Ling-Cohan to a wedding reception in a few months.

For much of the time they have been a couple, Ms. Shain said, she and Dr. Kennedy have been close friends with Rosalyn H. Richter, an appellate judge in Manhattan, and Justice Richter’s partner.

In a separate interview, Justice Richter said that she planned to volunteer on July 24 and that the weddings she would officiate would include that of her friends. “It’s special as a judge, and as a lesbian judge, to be able to do something for people that makes them genuinely happy,” she said. “It’s not something as a judge that fills your everyday work.”

Ms. Shain said having the ceremony performed by Justice Richter would be emotional. Reflecting on numerous conversations she and Dr. Kennedy had over the years with Justice Richter, Ms. Shain recalled, “We were saying, ‘It would be so wonderful if you could marry us — but who knows if it will ever happen in our lifetime.’ ”