For an Immigrant, a Shrinking Business and a Maze of Obstacles 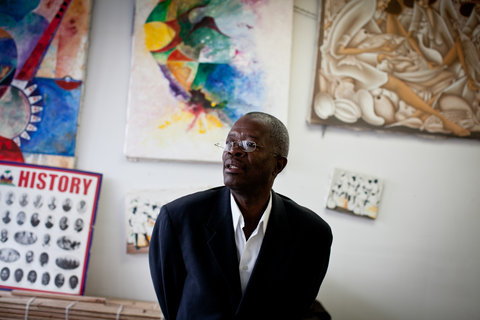 Michael Kirby Smith for The New York TimesAbel Cherubin has been struggling
to keep his tax preparation in Brooklyn afloat.

In better times, Abel Cherubin maintained a staff of six at his tax preparation business in Brooklyn, drove a BMW and even purchased a plot of land in his native Haiti, where he planned to build a school.

But in recent years, as his client base shrank by more than half, Mr. Cherubin, 54, has been forced to lay off the last of his employees, walk rather than drive to work and halt the construction of his Haitian school. Last month, Mr. Cherubin narrowly avoided eviction. Now, he has six weeks to raise the remaining $5,000 he owes his landlord.

Immigrants like Mr. Cherubin represent about 69,000 of New York City’s 144,000 small business owners, according to a recent report by the Fiscal Policy Institute.

Though these foreign-born entrepreneurs fuel New York’s economy with jobs, tax revenue, and goods and services, they must tread through a thicket of obstacles, which have only been compounded during the economic downturn.

Nationwide, immigrants are more likely than their American counterparts to start businesses, according to a 2008 analysis by the federal Small Business Administration. Experts offer various reasons: a lack of job opportunities due to skill or language challenges, the influence of business-owning peers or even a risk-taking spirit.

“It takes a certain type of person to say, ‘I’m going to leave my homeland and seek out opportunities in another place,’” said Carl Hum, president and chief executive of the Brooklyn Chamber of Commerce. “It’s that same DNA that leads a person to say, ‘I can’t find a job, so I’m going to create my own job.’”

Mr. Cherubin came to New York from Gonaïves, Haiti, in 1983. His mother had implored her son – a university-trained industrial mechanic with a “big mouth” – to avoid the fate of his father, a political prisoner who died in jail.

Once here, Mr. Cherubin worked in factories and drove taxis and a school bus before enrolling in a course on financial services. Soon afterward, Mr. Cherubin used his savings to rent a storefront in Crown Heights, Brooklyn, and open his own insurance sales and tax preparation business.

For 16 years, Mr. Cherubin has run the business and, for much of that time, he prospered. He estimates that his business generated income of $300,000 annually in his best years – enough for him to hire a staff, send relatives monthly remittances and purchase the Haitian artwork that covers the walls of his office.

But beginning in 2007, Mr. Cherubin’s clientele – a mix of working-class blacks, Latinos and West Indians – dwindled to 300 customers, from a peak of 800. He said many longtime customers left the city because of financial problems or replaced him with cheaper, online tax services. Last year, his total revenue dropped to $65,000.

With his earnings drastically reduced, Mr. Cherubin has struggled to cover basic operating costs and has had to borrow thousands of dollars from friends. In October, after his landlord began eviction proceedings, Mr. Cherubin paid $4,500 in back rent using money lent to him by his girlfriend. In the coming weeks, he plans to ask friends for the $5,000 he still owes his landlord. He hopes to repay them during tax season – provided he is still in business.

Meanwhile, he has stopped answering calls from some Haitian relatives, fearing they would ask for money he does not have.

“Mentally, it’s a lot of stress,” Mr. Cherubin said. ” Sometimes you lose weight, you don’t sleep at night. You ask yourself, ‘If things become worse, what you going to do?’”

The recession and its aftermath have battered many of the city’s small business owners, regardless of their country of origin. But immigrants often face additional challenges as they try to weather the tough economy. A 2009 study by Babson College and Baruch College found that immigrants in New York were less likely than nonimmigrants to own a business that has been running for more than three and a half years, and more likely to have closed a business within the past year.

Language issues make it difficult for some foreign-born business owners to comply with the city’s many business regulations or to reach customers beyond local ethnic enclaves. Others lack experience and fumble with business basics like record keeping, payroll and marketing.

A major stumbling block for Mr. Cherubin has been borrowing money. Many small-business owners struggle to obtain loans from risk-averse banks, but immigrants often have a harder time, as many possess little collateral and have bad or nonexistent credit histories.

“We’ve come across a lot of strong businesses whose growth is hampered by access to credit,” said Nancy Carin, executive director of the Business Outreach Center Network, based in New York, which offers technical assistance and loans to small businesses.

Mr. Cherubin applied to the city and a private bank for loans in the past, but in each case he was denied because of his low credit rating, he said. As a result, he turned to family members and friends for money.

Some critics say the city has not done enough to support foreign-born entrepreneurs and to incorporate them into its broader economic development plans. City officials noted several new initiatives meant to provide funding, training and exposure to foreign-born business owners.

Meanwhile, Mr. Cherubin is unsure whether his business will survive the few months left until tax season. Normally, he would paint bright scenes of the Haitian countryside to ease his mind, but this latest financial uncertainty has kept him away from the canvas.

“If you paint when you have trouble, everyone will see that,” said Mr. Cherubin. “When they see your painting, they will see your sorrow.”