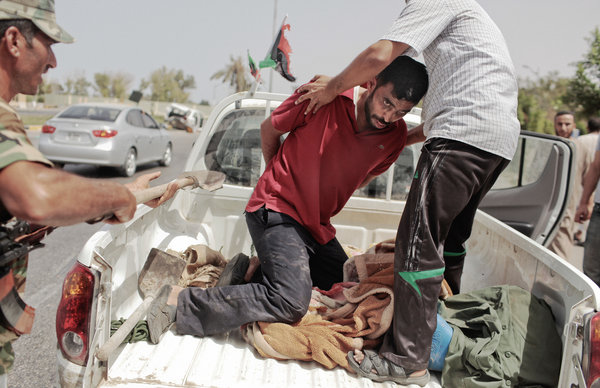 Walid Musbah, a self-proclaimed Qaddafi volunteer fighter captured by rebels, was put into the back of a pickup truck by rebel fighters on Friday. More Photos »

A faxed memo sent from the C.I.A. to a Libyan intelligence agency about the transfer of an arrested Libyan citizen and his wife. More Photos »

Although it has been known that Western intelligence services began cooperating with Libya after it abandoned its program to build unconventional weapons in 2004, the files left behind as Tripoli fell to rebels show that the cooperation was much more extensive than generally known with both the C.I.A. and its British equivalent, MI-6.

Some documents indicate that the British agency was even willing to trace phone numbers for the Libyans, and another appears to be a proposed speech written by the Americans for Col. Muammar el-Qaddafi about renouncing unconventional weapons.

The documents were discovered Friday by journalists and Human Rights Watch. There were at least three binders of English-language documents, one marked C.I.A. and the other two marked MI-6, among a larger stash of documents in Arabic.

It was impossible to verify their authenticity, and none of them were written on letterhead. But the binders included some documents that made specific reference to the C.I.A., and their details seem consistent with what is known about the transfer of terrorism suspects abroad for interrogation and with other agency practices.

And although the scope of prisoner transfers to Libya has not been made public, news media reports have sometimes mentioned it as one country that the United States used as part of its much criticized rendition program for terrorism suspects.

A C.I.A. spokeswoman, Jennifer Youngblood, declined to comment on Friday on the documents. But she added: “It can’t come as a surprise that the Central Intelligence Agency works with foreign governments to help protect our country from terrorism and other deadly threats.”

The British Foreign Office said, “It is the longstanding policy of the government not to comment on intelligence matters.”

While most of the renditions referred to in the documents appear to have been C.I.A. operations, at least one was claimed to have been carried out by MI-6.

“The rendition program was all about handing over these significant figures related to Al Qaeda so they could torture them and get the information they wanted,” said Peter Bouckaert, emergencies director of Human Rights Watch, who studied the documents in the intelligence headquarters in downtown Tripoli.

The documents cover 2002 to 2007, with many of them concentrated in late 2003 and 2004, when Moussa Koussa was head of the External Security Organization. (Mr. Koussa was most recently Libya’s foreign minister.)

The speech that appears to have been drafted for Colonel Qaddafi was found in the C.I.A. folder and appears to have been sent just before Christmas in 2003. The one-page speech seems intended to depict the Libyan dictator in a positive light. It concluded, using the revolutionary name for the Libyan government: “At a time when the world is celebrating the birth of Jesus, and as a token of our contributions towards a world full of peace, security, stability and compassion, the Great Jamhariya presents its honest call for a W.M.D.-free zone in the Middle East,” referring to weapons of mass destruction.

The flurry of communications about renditions are dated after Libya’s renouncement of its weapons program. In several of the cases, the documents explicitly talked about having a friendly country arrest a suspect, and then suggested aircraft would be sent to pick the suspect up and deliver him to the Libyans for questioning. One document included a list of 89 questions for the Libyans to ask a suspect.

While some of the documents warned Libyan authorities to respect such detainees’ human rights, the C.I.A. nonetheless turned them over for interrogation to a Libyan service with a well-known history of brutality.

One document in the C.I.A. binder said operatives were “in a position to deliver Shaykh Musa to your physical custody, similar to what we have done with other senior L.I.F.G. members in the recent past.” The reference was to the Libyan Islamic Fighting Group, which was dedicated to the overthrow of Colonel Qaddafi, and which American officials believed had ties to Al Qaeda.

When Libyans asked to be sent Abu Abdullah al-Sadiq, another member of the group, a case officer wrote back on March 4, 2004, that “we are committed to developing this relationship for the benefit of both our services,” and promised to do their best to locate him, according to a document in the C.I.A. binder.

Mr. Bouckaert of Human Rights Watch said he had learned from the documents that Sadiq was a nom de guerre for Abdel Hakim Belhaj, who is now a military leader for the rebels.

In an interview on Wednesday, Mr. Belhaj gave a detailed description of his incarceration that matched many of those in the documents. He also said that when he was held in Bangkok he was tortured by two people from the C.I.A.

On one occasion, the Libyans tried to send their own plane to extradite a member of the Libyan Islamic Fighting Group, Abu Munthir, and his wife and children, who were being held in Hong Kong because of passport irregularities.

The Libyan aircraft, however, was turned back, apparently because Hong Kong authorities were reluctant to let Libyan planes land. In a document labeled “Secret/ U.S. Only/ Except Libya,” the Libyans were advised to charter an aircraft from a third country. “If payment of a charter aircraft is an issue, our service would be willing to assist financially,” the document said.

While questioning alleged terror group members plainly had value to Western intelligence, the cooperation went beyond that. In one case, for example, the Libyans asked operatives to trace a phone number for them, and a document that was in the MI-6 binder replied that it belonged to the Arab News Network in London. It is unclear why the Libyans sought who the phone number belonged to.

The document also suggested signs of agency rivalries over Libya. In the MI-6 binder, a document boasted of having turned over someone named Abu Abd Alla to the Libyans. “This was the least we could do for you to demonstrate the remarkable relationship we have built over recent years,” an unsigned fax in 2004 said. “Amusingly, we got a request from the Americans to channel requests for information from Abu Abd through the Americans. I have no intention of doing any such thing.”

Reprinted from The New York Times, International, of Sunday, September 4, 2011.