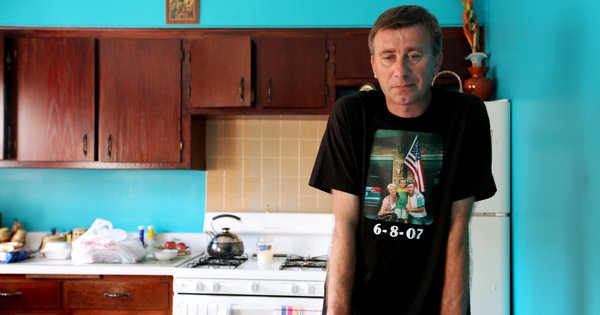 Tony Wasilewski has lived alone the last four years since his wife, Janina, was deported to Poland and their son, Brian, went with her.

Mr. Wasilewski keeps a photograph from his son's confirmation, which took place in Poland in 2010.

The woman, Janina Wasilewski, was deported in 2007 after living for 18 years in the Chicago suburbs. Several applications she had filed to become a legal resident became hopelessly tangled in the immigration courts and were finally denied. She left behind her husband, Tony, also a Polish immigrant, but with his agreement she took their son, Brian, an American citizen, who was 6.

The Wasilewski family became one of the nation’s most visible examples of the impact of deportation, just as the pace of removals has accelerated under the Obama administration, to nearly 800,000 over the last two years. Images of the scene when Mrs. Wasilewski left from O’Hare Airport in June 2007 were circulated widely, with her husband gripping her and their son and weeping as he begged them not to cry.

“I can come back again to my sweet home in Chicago,” Mrs. Wasilewski said by telephone last week from Nowe Miasto Lubawskie, a country town in north central Poland where she has lived with Brian in a small apartment for the last four years. Still disbelieving, she said she would not allow herself any joy until she and her son were on the airplane approaching Chicago.

Her homecoming will culminate a 22-year legal fight in which Mrs. Wasilewski, now 45, lost every battle but the last. Her case has cast light on some of the immigration system’s cul-de-sacs and severe penalties that lawyers say have stopped hundreds of thousands of immigrants who lack legal status as Mrs. Wasilewski did — otherwise law-abiding parents or spouses of American citizens — from finding a way to get right with the law.

Under a 1996 statute, Mrs. Wasilewski had been barred, after her deportation, from re-entering the United States for at least 10 years. The authorities finally reversed course in July, granting a waiver that allowed her to return with a legal permanent resident’s green card.

Mrs. Wasilewski had the help of a tenacious lawyer, Royal F. Berg, and several lawmakers, especially Representative Luis V. Gutierrez, Democrat of Illinois. The documentary filmmaker Ruth Leitman was appalled by the family’s separation and made a film about it. Immigrant advocate groups in Illinois kept the case in the public eye.

There has been a shift in Washington, with President Obama saying he wants to avoid separating immigrant families and focus on deporting foreigners who have been convicted of crimes.

But it was Mr. Wasilewski, with his unyielding determination to provide his wife and child with a life in the United States, who ultimately won her return. In 2007, even after the country had expelled his wife, in one of the bleakest periods of his solitary wait, he decided to become an American citizen.

“It was very hard to choose between my family and the United States,” Mr. Wasilewski said by telephone from his home in Schiller Park, Ill. After traveling back to Poland to visit his wife and son, he said, “I choose America.”

He also wanted to erase the stain of deportation on his family. “I did it for three reasons for my wife,” he said, using a grand phrase that has been his mantra: “Honor, dignity and justice.”

Tony and Janina Wasilewski came here separately from Poland in 1989, both entering legally. Mr. Wasilewski eventually obtained a green card and then his citizenship. Janina took a different course, applying for political asylum based on her anti-Communist activism in her home country.

She and Mr. Wasilewski fell in love in Chicago, marrying in 1993 and starting a small housecleaning business. In 1995, after years of delays during which Communist rule ended in Poland, an immigration judge denied her asylum petition. Mrs. Wasilewski said the lawyer representing her did not make it clear that she had to leave the United States and could not try another avenue to gain residence.

So in 1998, when she applied for a green card under a different law, the immigration authorities responded by initiating her deportation.

Once Mr. Berg took the case, he did not give up, appealing all the way to the United States Supreme Court and trying to bring Mrs. Wasilewski back after she was forced to leave. He had to persuade the authorities to grant her a waiver by showing that her deportation had caused extreme hardship to a close relative who was a citizen.