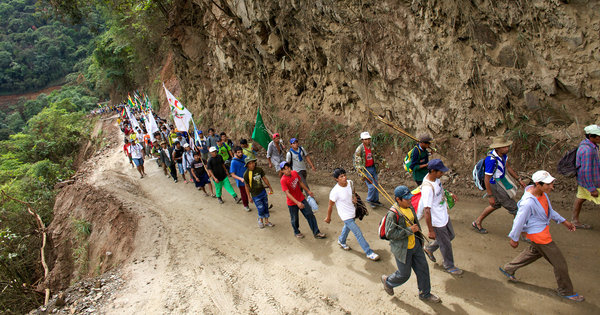 Bolivian indigenous groups undertook a 325-mile march from the central lowlands to La Paz, to protest a Brazilian-backed road project through their territory. More Photos »

A protester in La Paz. The demonstrators denounced President Evo Morales, their onetime champion, as a lackey of Brazil. More Photos » 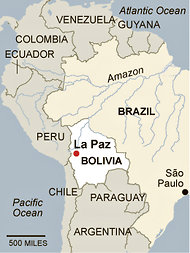 Such heated words used to be reserved for the United States, which has wielded extraordinary influence across Latin America. But as American dominance in the region recedes and Brazil increasingly flexes its newfound political and economic might, it has begun to experience the pitfalls of the role as well: a pushback against the hemisphere’s rising power.

“Power has shifted from one side of Avenida Arce to the other,” said Fernando Molina, a local newspaper columnist, referring to the street in La Paz where the Brazilian ambassador’s residence sits opposite the towering embassy of the United States.

Brazilian endeavors are being met with wariness in several countries. A proposal to build a road through Guyana’s jungles to its coast has stalled because of fears that Brazil could overwhelm its small neighbor with migration and trade.

In Argentina, officials suspended a large project by a Brazilian mining company, accusing it of failing to hire enough locals. Tension in Ecuador over a hydroelectric plant led to bitter legal battle, and protests by Asháninka Indians in Peru’s Amazon have put in doubt a Brazilian dam project.

But perhaps no Brazilian project in the region has stirred as much ire as the one here.

Financed by Brazil’s national development bank — a financial behemoth that dwarfs the lending of the World Bank and has become a principal means for Brazil to project its power across Latin America and beyond — the plan was to build a road through a remote Bolivian indigenous territory. But it provoked a slow-burning revolt; hundreds of indigenous protesters arrived here in October after a grueling two-month march that took them up the spine of the Andes, denouncing their onetime champion, President Evo Morales, for supporting it.

“Llunk’u of Brazil,” read one of their placards, calling the president a minion of Brazil, in Quechua, an indigenous language. Mr. Morales, Bolivia’s first indigenous president and an avowed environmentalist, suddenly found himself at odds with an important part of his political base, defending a Brazilian project that could increase deforestation. He eventually yielded to the protesters’ demands and ruled out the road though the territory.

Companies from other countries, notably China, are also expanding rapidly in Latin America and occasionally confronting hostility. But Brazil is the region’s largest nation, with a population of about 200 million people, and the size and boldness of its rise over the past decade help explain some of the tension it has generated.

Hundreds of thousands of Brazilian immigrants and their descendants have settled in Paraguay, often buying up land for large-scale agriculture in a country with a much smaller population. Called Brasiguayos, they have been both celebrated for helping Paraguay’s economy boom and demonized for controlling large tracts of land, at times leading land activists to burn Brazilian flags.

More than a century ago, before it became a republic, Brazil was an empire with occasional designs on neighbors’ territory, often serving as an arbiter in disputes in Latin America.

Brazil now relies on a sophisticated diplomatic corps, rising foreign aid payments and the deep pockets of its development bank, which finances projects not just in Latin America but in Africa as well.

“When Kissinger came to Brazil more than three decades ago, he warned his hosts that they could end up being feared rather than loved by their own neighbors,” said Matias Spektor, a professor at Brazil’s Fundação Getulio Vargas, an elite educational institution, referring to the former American secretary of state, Henry A. Kissinger, and his efforts to forge stronger ties with Brazil in the 1970s.

“Now Brazil is engaging Latin America more deeply, without a clear policy of addressing the anxiety that can accompany this process,” Mr. Spektor said. “There’s the real danger of being on the receiving end of anger in certain places.”

Here in Bolivia, the United States once had unrivaled influence, before Mr. Morales’s election in 2005. Since then, Mr. Morales has clashed repeatedly with Washington while warming to other countries, notably Brazil, Venezuela, Cuba and Iran. Since 2008, when Mr. Morales expelled the American envoy, Philip S. Goldberg, the United States has not had even an ambassador here.

But Brazil’s profile has grown. A Brazilian company, OAS, won the $415-million road contract in 2008, with financing coming from the National Bank for Economic and Social Development in Brazil. It is making about $83 billion in loans in 2011. The World Bank, by comparison, lent $57.4 billion.

As the protest march against the road began advancing through the lowlands in August, Brazil’s popular former president, Luiz Inácio Lula da Silva, flew to Bolivia to deliver a speech sponsored by the Brazilian company to businessmen and to meet with Mr. Morales. (Mr. da Silva’s aides argued the road dispute was not part of the trip’s agenda.)

The trip came at critical time, when talks were faltering. But Mr. da Silva’s trip failed to ease the tension, and it became known his visit was part of a three-country trip paid for by OAS and Queiroz Galvão, another Brazilian construction company, which included stops in Costa Rica and El Salvador.

“It’s obvious that Brazil just wants our resources,” said Marco Herminio Fabricano, 47, an artisan from the Mojeño indigenous group who was among the marchers to La Paz. “Evo feels like he can betray us to his Brazilian allies.”

Brazilian officials insist that the road has nothing to do with betrayals or resource grabs.

“We want Brazil to be surrounded by prosperous, stable countries,” Marcel Biato, Brazil’s ambassador to Bolivia, said about infrastructure financing in Bolivia and elsewhere in South America.

Indeed, Brazilian authorities argue that their country has access to other sources of raw materials, as well as to routes across the continent through which it can send goods to ports on the Pacific.

But the road does hold strategic importance for coca growers, perhaps Mr. Morales’s most loyal constituency, made up largely of Quechua- and Aymara-speaking Indians, setting up a clash between them and other indigenous groups that live in the territory.

Brazil continues to nurture an array of plans in Bolivia, including several hydroelectric projects and an ambitious antidrug policy that involves deploying drones on the border and training and equipping Bolivian security forces.

But the road dispute has put Brazil on watch here. “Just as China consolidates regional hegemony in Asia, Brazil wants to do the same in Latin America,” said Raúl Prada Alcoreza, a former senior official in Bolivia’s government who is now a fierce critic of Mr. Morales.

“A Bolivian process intended to provide an alternative, and the social movements which helped make this government possible,” Mr. Prada said, “end up being trampled by Brazilian interests.”