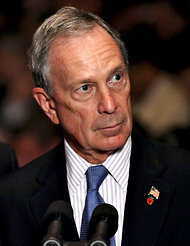 The mayor spoke about the economy on a radio program.

“You have a lot of kids graduating college can’t find jobs,” he said in response to a question about the poverty rate. “That’s what happened in Cairo. That’s what happened in Madrid,” he continued, referring to the uprising that overthrew President Hosni Mubarak of Egypt and the more recent protests against the Spanish government’s austerity measures. “You don’t want those kinds of riots here.”

Riots or no, Mr. Bloomberg does have reason to be concerned about unemployment. He frequently describes New York City as having recovered from the recession more fully than the rest of the country. At an event on Tuesday to announce a new round of job creation and training grants, he noted that, while the nation as a whole had gained back only one out of every four jobs lost during the recession, New York City had gained back all of the lost jobs and added some, too.

Recently, though, the difference between New York and the rest of the country is not looking so clear. Figures released on Thursday by the State Department of Labor show that the city’s official unemployment rate rose to 8.7 percent in August from 8.6 percent in July, as the total number of jobs declined. (Age groups were not broken out in that report. Statewide, the unemployment rate among 22- to 27-year-olds in the first half of 2011 was 11.4 percent, compared with an overall unemployment rate for people 16 and over of 8 percent.)

The mayor is watching these numbers closely. On Tuesday, he said that creating jobs “remains our No. 1 priority.”

Perhaps the mention of riots was his subtle way of trying to prod Washington to pass a jobs bill. He has been known to invoke the possibility of riots before, when looking to spur a divided Legislature into action.

A version of this article appeared in print on September 17, 2011, on page A19 of the New York edition with the headline: Bloomberg, on Radio, Raises Specter of Riots by Jobless.