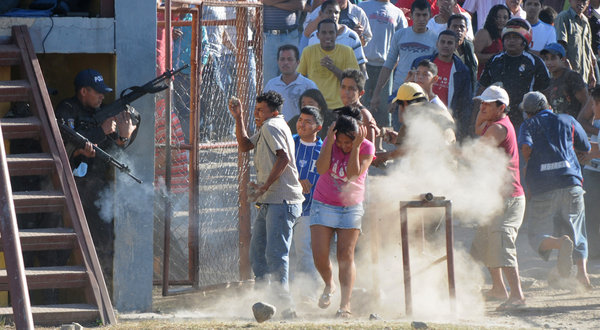 The Honduran police on Wednesday struggled to control the distraught relatives of inmates after a fire at a prison in Comayagua. More Photos » 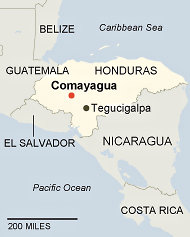 Outside the fence, hundreds of relatives rushed the gates of the burned-out prison on Wednesday, anguished and anxious for any word, clashing with soldiers and the police when they could not get in. As a prison officer stood on a balcony, reading out a roll call of the dead and survivors from a handwritten list, faces in the crowd turned away in tears.

It was one of the worst prison fires in recent years in Latin America, with a death toll surpassing 300, most of the victims choking to death in their cells awaiting a rescue that never came. Guards with the keys were nowhere to be found, rescuers said. Some inmates bashed their way through the roof to escape, and kept running. They are now fugitives.

Honduran prisons are rife with overcrowding, rioting and abuse on a normal day, but on Tuesday night, when officials say an inmate set fire to his mattress, things turned unimaginably worse, and this nation, already sinking into turmoil from a wave of drug trafficking, was staggered by yet another crisis.

Honduras has the highest murder rate in the world, according to the United Nations. The country’s institutions are still recovering from a 2009 coup. The police are committing assassinations. Criminal groups are extorting and kidnapping almost at will. The Peace Corps has withdrawn over concerns about crime. And the nation’s prisons are so overwhelmed that in 2010 the government declared a state of emergency in the system, acknowledging that nearly half of its prisons did not meet the minimum requirements for penitentiaries.

“This horrendous tragedy is the result of prison conditions that are symptomatic of the country’s larger public security crisis,” said José Miguel Vivanco, director of the Americas division of Human Rights Watch. Given the violence gripping the nation, he added, “there’s huge pressure to lock up real and suspected criminals, and unfortunately almost no concern for these prisoners’ well-being.”

Survivors recounted horrific scenes of companions ablaze and people trapped in their cells after the fire, the third major prison disaster in the country since 2003, broke out and burned out of control for 40 minutes before the first rescuers arrived around 11:30 p.m.

“We were asleep when we suddenly heard the screams of people on fire,” said a survivor interviewed on the Televicentro television network outside the prison, where a proverb over the entrance reads, “Let justice be done even if the world perishes.”

Family members, many of whom rushed to the prison in their pajamas, agonized throughout the day. The eight children of José Alejandro Morales gathered in a circle outside the prison’s gates early Wednesday waiting for an answer. Mr. Morales, who was sent to the prison two years ago on an armed robbery charge, was not on the list of survivors, nor had he been confirmed dead.

Then, around 2:30 p.m., a fresh list of the dead began to circulate, and the children fell to their knees.

“Our lives are ruined,” said Doris Morales, a daughter, after hearing his name. “He may have deserved to be punished, but he did not deserve this.”

The bodies of many other prisoners had been incinerated, making identification nearly impossible. Inside the prison’s gates, the thud of hundreds of black body bags being dropped at the entrance by military personnel broke the afternoon air. The bags screeched as they were dragged along a gravel road, then heaved into the back of a truck, ready to be taken to the morgue.

Honduran prisons, like many in Central America, are notorious for overcrowding and violence, a problem made worse as drug gangs have overrun the nation and set up staging grounds to move cocaine from South America to the United States.

A United Nations report in October said that Honduras had the highest murder rate in the world, at 82.1 per 100,000 residents, far ahead of the worldwide rate of 6.9. President Porfirio Lobo last week accepted a technical adviser on security sent by the United States government to help control the violence and impunity.

While Latin American prisons in general are susceptible to fires and rioting, the problem in Honduras is particularly serious, according to human rights groups and other monitors.

The country’s 24 prisons house nearly 13,000 inmates, but the capacity is believed to be around 8,000, and in 2010 the government declared its state of emergency in the system. Óscar Álvarez, then the security director, said nine of the facilities were so inadequate that they did not meet the minimum standards for a prison.

In 2003, a riot in a Honduran prison left 68 inmates dead, 51 of them shot, stabbed, beaten or burned to death by police officers, soldiers or prison staff members, according to a report by the government, which promised to revamp and improve the system.

But the next year, a fire in another overcrowded prison, believed to have been caused by a short circuit, killed more than 100 prisoners, most of them gang members.

Elias Carranza, director of the United Nations’ Latin American Institute for the Prevention of Crime and the Treatment of Offenders, said most countries in the region had doubled and in some cases tripled their prison population and rushed to build new facilities as drug violations and other crimes had mounted.

“All the governments are in the process of building new prison facilities,” he said. “But the flow of new incoming prisoners in the system is greater than what is being built.”

The victims in the latest fire were burned to death or asphyxiated in their cells, prison officials told local news media. Several were taken to hospitals, and television reports showed severely injured inmates partly clad and writhing on stretchers.

Mr. Lobo said that an investigation had begun and that international aid was on its way. The Organization of American States said its human rights division would send a delegation to investigate the fire, and Mr. Lobo said he had suspended the prison’s administrators until an investigation could be conducted.

The prison was believed to hold more than 900 inmates, but its original capacity was unclear. It housed serious offenders but took steps to include opportunities for rehabilitation, including a farm on which inmates grow their own food, sew uniforms for the national police and do woodwork.