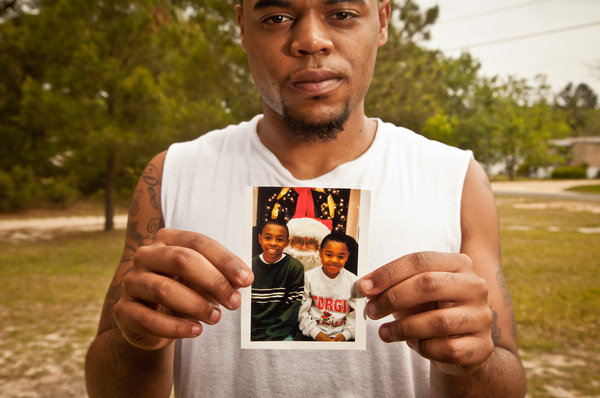 Sha’von Patterson with a photograph of him and his brother, Justin, who was shot and killed by Norman Neesmith on Jan. 29, 2011.

Mr. Neesmith’s home in Lyons, Ga., where the shooting took place. He fired four shots, and Justin Patterson died in his yard.

Deede Patterson, the young men's mother, with Justin's daughter. The Pattersons are helping to raise their granddaughter.

Mr. Neesmith’s expected guilty plea might bring a year in a special detention program that requires no time behind bars.

Justin Patterson’s grave. His friends said he was quiet, charming and a great basketball player.

He grabbed the .22-caliber pistol he kept next to his bed and went to investigate. He found two young brothers who had been secretly invited to party with an 18-year-old relative he had raised like a daughter and her younger friend. The young people were paired up in separate bedrooms. There was marijuana and sex.

Over the course of the next confusing minutes on a January morning in 2011, there would be a struggle. The young men would make a terrified run for the door. Mr. Neesmith, who is 62 and white, fired four shots. One of them hit Justin Patterson, who was 22 and black.

The bullet pierced his side, and he died in Mr. Neesmith’s yard. His younger brother, Sha’von, then 18, ran through the onion fields in the dark, frantically trying to call his mother.

On that day, Jan. 29, 2011, Mr. Neesmith was arrested. The district attorney brought seven charges against him, among them murder, false imprisonment and aggravated assault. On Thursday, Mr. Neesmith is expected to plead guilty to involuntary manslaughter and reckless conduct, which might bring a year in a special detention program that requires no time behind bars.

Over the past several weeks, the men’s parents, Deede and Julius Patterson, watched news of Trayvon Martin’s death in Florida and focused on the similarities. In both cases, an unarmed young black man died at the hands of someone of a different race.

And they began to wonder why no one was marching for their son, why people like the Rev. Al Sharpton had not booked a ticket to Toombs County. The local chapter of the N.A.A.C.P. has not even gotten involved, although Mr. Patterson’s father approached them.

“We are looking into the case,” said Michael Dennard, the president of the chapter, after a reporter called more than a year after the crime. He would not say more.

Why some cases with perceived racial implications catch the national consciousness and others do not is as much about the combined power of social and traditional media as it is about happenstance, said Ta-Nehisi Coates, a senior editor at The Atlantic who writes about racial issues.

“These stories happen all the time,” Mr. Coates said. “It’s heartbreaking and tragic, but there’s not much news coverage unless the circumstances are truly, truly unusual.”

“Stories like the south Georgia killing don’t have the same particulars,” he said. “One of the great tragedies is that people get shot under questionable circumstances in this country all the time.”

Although the facts surrounding the case in Florida and the case in Georgia are quite different, both involve a claim of legally sanctioned self-defense, a dead young black man and, for the Pattersons and the Martins, deep concern that race played a role in the deaths of their sons.

“I definitely believe racism is why he was shot,” said Mrs. Patterson, who recently left her job as director of operations at a uniform company and moved to another small Georgia town. “And for him to get nothing but a slap on the wrist? There is something wrong here.”

That race played a significant part is not hard to imagine here in a county that was named after Robert Toombs, a general and one of the organizers of the Confederate government. A black woman has never been named Miss Vidalia Onion in the annual festival that begins Thursday. And until last year in neighboring Montgomery County, there were two proms — one for whites and one for blacks.

Still, like so many other crimes where race might be a factor, this one is not so clear-cut. Mr. Neesmith says he felt threatened. He says he aches for the parents but believes none of this would have happened if the young men had not been in his house when they should not have been.

“I think about it every day. It’s the worst thing I’ve ever been through,” Mr. Neesmith said as he stood in the doorway of his home. “In two minutes it just went bad. If you ain’t never shot nobody, you don’t want to do it, I’m telling you.”

In the backyard, a pool was ready for neighborhood kids — both black and white — who he said loved to come over after school for a swim. Mr. Neesmith, a former school bus driver, and his late wife had been foster parents to dozens of children.

They took in a great-niece, who has a black parent, when she was a baby. She is now 19 and admitted to investigators that she invited Justin Patterson to their trailer home that night, timing it so Mr. Neesmith would be asleep. The two had been flirting on Facebook and in texts.

When Mr. Neesmith pulled the young men out of the bedrooms, he threatened to call the younger girl’s grandfather, according to court documents and interviews. He asked the two, who both have young daughters, why they were not home with their children. He ranted and waved the gun around.

So the brothers made a run for it. By all accounts, while the younger one struggled to unlock a side door, the older one shoved Mr. Neesmith.

Police testimony in early court documents shows that Justin Patterson pushed him against a table and chairs. In a recent interview and in other documents, Mr. Neesmith said he took a “whipping” that caused bleeding and cuts. He showed a reporter repairs to two holes in the wall that he said came from the struggle.

Mr. Neesmith’s first shots were fired while he was on the floor, according to investigators. One bullet hit the ceiling and the other hit Justin Patterson. Then, as the two ran, Mr. Neesmith went to the porch and fired two more shots. He called a friend, a bail bondsman, who told him to call the police.

Mr. Neesmith said he fired the extra shots as a warning. “Those boys could have come back and killed me in my own bed,” he said.

District Attorney Hayward Altman said he presented the more serious charges to the grand jury because he did not know exactly what he was dealing with. It is easier to reduce charges than add more, he said. And it seemed that a more serious crime had been committed.

“There was no weapon in their hand,” Mr. Altman said in early court documents. That they ran was understandable. It was, he said, “a normal reaction for young men under those circumstances.”

As the case unfolded, however, circumstances became clearer. The other girl in the trailer was 14, though she had told the men she was 18. Mr. Neesmith’s lawyers pointed out that a statutory rape charge could be brought. So could drug charges.

The shots off the porch were something someone in the country might do to make sure the intruders did not come back, Mr. Altman said. Mr. Neesmith, who has a chronic nerve condition in his right arm and hand as well as other health problems, had been woken up in the middle of the night. He was not thinking clearly, Mr. Altman said; he had no record, and by all accounts was a good man.

Moreover, Mr. Altman said in a recent interview in his office, “I couldn’t see that I could find a jury that would convict.” Most people in a rural area with a high percentage of gun ownership would most likely accept that the fatal shot was in self-defense, he said.

“It might not feel fair for the family, and I am sorry for their loss,” he said. “But this is not at all like the case in Florida, other than they are both tragedies.”

At Justin Patterson’s grave, his mother shakes her head. She visited with her son’s preschool-age daughter, whom the Pattersons, though divorced, are helping to raise.

She says things simply do not add up. What made the district attorney change course? And how could her son, who was not even 5-foot-7 and perhaps 120 pounds, be such a threat to Mr. Neesmith, who is 6-foot-2 and 240 pounds?

“If he had just asked them to get out of his house, they would have,” she said. “They are mannerable boys. He took a life he didn’t have to take.”

Julius Patterson, who works maintaining soda vending machines, sees Mr. Neesmith around town. “At the end of the day, really we wouldn’t have gotten a fair trial because everyone knows him,” he said.

Sha’von Patterson is so troubled he can barely speak about the shooting. His older brother was watching out for him to the end, just as his mother had told him to all his life. His death changed everything.

“It made me grow up and realize you can leave this earth anytime,” he said.

Justin Patterson, whom friends recalled as quiet, charming and a great basketball player, had a tattoo on his right arm that read, “I am who I am.” In his brother’s memory, Sha’von Patterson and several of Justin’s friends got tattoos.

Jay Sneed, 22, who went to kindergarten with Justin and was one of his closest friends, is one of them. “Everything down here is just real bad when it comes to situations like this,” he said. “This is not where you come to find justice.”