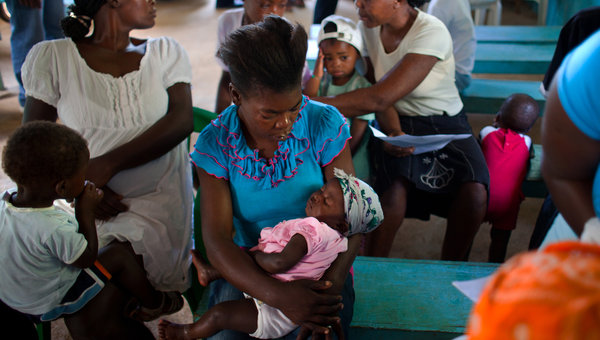 Some Haitians are being paid to leave the Dominican Republic.

Benie Boner was photographed and fingerprinted last month in Chene, Dominican Republic, as part of the International Organization for Migration's project to help Haitian refugees repatriate.

The police and military near the border, with little more to go on than darker skin color and a failure to produce identification, have stopped cars and buses and forced them to Haiti, human rights groups say. The Dominicans also are using a new law to deny citizenship to children of illegal immigrants and deport people who had been born and lived here for years, advocacy groups contend.

The deportations are a sign of impatience with the limping recovery in Haiti and the waning international sympathy for its enduring troubles. Haiti and its international donors are far behind in helping the hundreds of thousands still living in makeshift camps and the millions without formal jobs, a crisis worsened by a political stalemate that has blocked Haiti’s new president, Michel Martelly, from forming a new government more than 100 days after taking office.

“It’s kind of an unsolvable issue,” said Robert Maguire, a Haiti scholar at George Washington University. “The truth is when Haitians leave, to the Dominican Republic and other places, they tend to do well or at least better than in Haiti, so they keep leaving.”

Several countries bestowed an effective grace period on Haitian migrants and refugees after the earthquake on Jan. 12, 2010, but that appears to be ending. The United Nations High Commissioner for Refugees recently urged countries to reverse a new wave of deportations to Haiti because conditions remain precarious there.

Haiti “cannot yet ensure adequate protection or care especially for some vulnerable groups in case of return,” the statement said.

Deportees have also come from Jamaica and the Bahamas, according to aid organizations in Haiti. The United States resumed deporting Haitians several months after the quake, and American immigration officials say they expect to deport some 700 this year, focusing on people convicted of crimes.

Dominican officials say they have borne the brunt of both quake refugees and recent economic migrants, adding to a steady flow of people from Haiti who have slipped through the porous border for decades to cut sugar cane, harvest coffee beans, work construction and do other low-wage jobs.

Last week, José Ricardo Taveras, the nation’s new immigration director, a member of a political party known for its hard line on immigration, lashed out at the United Nations for failing to slow the influx. Last month, he cited estimates of the 500,000 or more Haitians in this country, telling local journalists that “nobody can resist an invasion of that nature” and that thousands of Haitians had been deported.

Right after the earthquake, the Dominican Republic, a nation with a history of both conflict and cooperation with Haiti, its poorer sibling on the island of Hispaniola, was among the first to offer aid. It sent teams to assess the damage and deliver food and medicine, eased visa requirements to allow the injured into Dominican hospitals and opened staging areas for relief shipments.

The good will was a welcome departure from the notorious low points between the neighbors — most notably the massacre of thousands of Haitians by the Dominican military in 1937 — and raised hopes of a tighter bond.

But the unemployment rate is high here — at about 14 percent last year, it is among the highest in Latin America — and cholera, which has killed nearly 6,000 in Haiti since October, has killed more than 90 in the Dominican Republic, many of them Haitian migrants.

This spring, banners sprang up in Santiago, Mr. Taveras’s hometown, calling on Haitians to go home. Protests erupted over the refugees’ presence, and a number of migrants fled.

“We are defending our sovereignty because Dominican manpower has been practically eliminated in construction,” Juan Francisco Consuegra, a community leader there, told reporters during a demonstration.

The tension became pitched enough that the International Organization for Migration offered a way out: paying Haitians $50 apiece, plus additional relocation assistance, to go home willingly. More than 1,500 have gone back through the program.

“Anything is better than the conditions we are in now,” said Bernier Noel, who registered to leave. The earthquake flattened his house in Haiti. Now he cannot wait to return.

Never did he imagine that the devastation he saw in Haiti would seem a step up, but at least there are friends willing to take him in while he tries to revive a meager business selling shoes on the street.

Dominican officials said they had gone out of their way to assuage the crisis in Haiti. The deportations, they insist, are aimed at recent arrivals and, in the case of numerous children found to have been smuggled in to beg or work as prostitutes, have been done with the help of nongovernmental organizations.

Alejandra Hernández, the minister counselor at the Dominican Embassy in Washington, said Dominican health authorities spent more than $11 million for emergency aid in the month after the earthquake, and $27 million in 2010. But refugees are now an economic burden, Ms. Hernández said, using health, police and other services.

Their arrival “follows a long-established pattern of economic migration, which for years has placed great demands on our country’s capacity,” she said, noting that in the first half of 2010, one-sixth of all live births in her country’s public hospitals were to Haitian mothers.

For Haitians in the Dominican Republic, life is getting tougher, which may be the point.

Gabriel G. Teodoro, 31, said he lost his job as a messenger at a law firm because he could not renew his national identity card. Although born in the Dominican Republic — and ignorant of the Haitian language or culture — he was turned away at the immigration office under the new law because his parents were illegal immigrants, Mr. Teodoro said.

“This country benefits from our labor, but I am being denied because of my Haitian heritage,” he said. His is one of dozens of cases human rights advocates are appealing.

On a recent morning here, a stream of Haitian migrants walked out from their hovels in the brush to fill a church and register to leave under the International Organization for Migration’s program.

Pedite François came clutching his 14-month-old daughter, Cedita. “It is hard to find work,” he said. “A day without work is a day without food.”

Reprinted from The New York Times, International, of Wednesday, August 31, 2011.