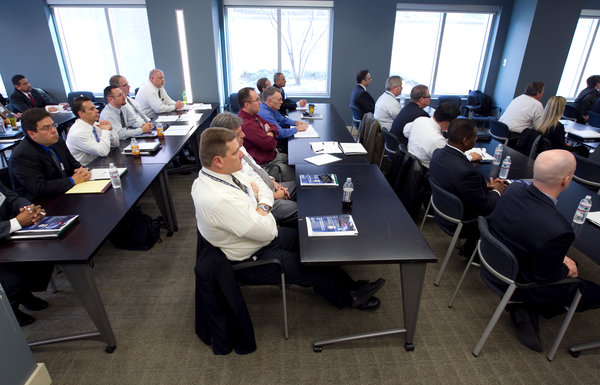 Supervising agents listening last month to John Morton, the director of Immigration and Customs Enforcement, which is asking its staff to make nuanced decisions on when to initiate deportation proceedings.

The training course is the clearest sign yet that administration officials want to transform the way immigration officers work, asking them to make nuanced decisions to speed deportations of high-risk offenders while halting those of illegal immigrants with clean records and strong ties to the country. The policy is President Obama’s most ambitious immigration initiative before the November elections, senior administration officials said.

But in a new sign of the deep dissension over immigration, the union representing some 7,000 deportation officers of the agency, Immigration and Customs Enforcement, known as ICE, has so far not allowed its members to participate in the training. Without the formal assent of the union, the administration’s strategy could be significantly slowed for months in labor negotiations.

Chris Crane, the president of the union, the National ICE Council, has fiercely criticized the strategy, saying it amounts to orders from ICE officials for agents not to enforce the law. In Congressional testimony, Mr. Crane accused the administration of tailoring its enforcement practices to win support from immigrant communities for Mr. Obama’s re-election.

“Law enforcement and public safety have taken a back seat to attempts to satisfy immigrant advocacy groups,” Mr. Crane told a House Judiciary subcommittee in October.

Department of Homeland Security officials say the training seminar, although only half a day, is central to bringing all ICE officers on board for an effort that they say will significantly raise the numbers of convicted criminals among deportees and is expected to lead in coming months to unprecedented suspensions of deportations of tens of thousands of illegal immigrants.

Virtually all ICE commanding officers and prosecutors have gone through the training course and are working on the new strategy, Homeland Security Department officials said. But because of the silence from the ICE Council, a local of the American Federation of Government Employees, the officials will miss their Jan. 13 goal for completing the nationwide training blitz, which began in November.

Mr. Crane has channeled his criticisms primarily through Republican leaders in Congress, working with Representative Lamar Smith of Texas, the chairman of the House Judiciary Committee. Calling the administration’s plan “backdoor amnesty,” Mr. Smith said last week that evidence Mr. Crane presented to the committee showed that directives from ICE officials for agents to use discretion in enforcement decisions had “undermined the agency’s credibility and mission.”

The National ICE Council faces a deadline late this month to say whether it will demand negotiations over the training, the officials said. Mr. Crane did not respond to repeated e-mail requests over several months for comment.

On another side, the administration is facing intense pressure from Latino leaders and immigrant organizations to begin halting deportations.

The cornerstone of the policy is a June 17 memorandum by John Morton, the director of ICE, in which he laid out a list of no fewer than 31 factors that ICE officers should weigh when deciding whether to proceed with a deportation. Peter S. Vincent, ICE’s top lawyer, added further guidelines on Nov. 17.

With slide shows and chalk talks on a dozen hypothetical immigration cases, the training seminar challenges officers to decide which foreigners should be deported, using prosecutorial discretion to make more complex decisions than they have in decades. It instructs agents to focus on the worst offenders, including criminal convicts, gang members and foreigners who came back after being expelled. Other groups of immigrants — elderly people, children, military veterans, college students and parents of young citizens — are low priorities who can be allowed to stay, even if they are here illegally. A New York Times reporter sat through an abbreviated version of the seminar.

Homeland Security Secretary Janet Napolitano said the policy was based on existing statutes and was intended to make good use of strained resources. With each deportation costing at least $23,000, she said, immigration agencies have money for 400,000 removals each year, a goal that the Obama administration has met in each of the past three years. But an estimated 11 million immigrants live here illegally.

The training asks ICE agents what they should do, for example, with a young illegal immigrant turned over to the agency after being arrested by a state trooper for driving without a license. She has been living in this country since 1993 and has an infant son, an American citizen because he was born here. But she lied to ICE officers, failing to tell them she had a conviction for shoplifting in 1995.

Answer: She is not a threatening criminal and may still be nursing her American baby. Officers should close her deportation case.

How about the migrant who has been living here since he crossed the Southwest border illegally in 1996? He failed to appear for a crucial immigration court hearing back then. But he has no criminal record, and he coaches soccer at the school where his twin daughters, both citizens, are enrolled.

Answer: This case, too, should be closed.

Then there is the man from an Asian Pacific island, a legal resident of the United States since 1984 who even served two distinguished combat tours in Iraq. But he left the military and is now finishing a six-year prison sentence for a federal sex-trafficking felony.

Answer: Despite his service, because of his grave sex offense he loses his resident status and will be sent by ICE to his birth country.

Cases against illegal immigrants who win favorable prosecutorial discretion will be closed but not canceled, so ICE can easily reopen them. Mr. Morton said the immigrants would remain in “legal limbo,” not gaining any legal immigration status.

Mr. Crane told Congress that the Morton directives presented enforcement agents with “a roller coaster of arrest authority that has changed from month to month, week to week and at times from day to day.” He said some agents were afraid to make any arrests.

It is not clear how deeply the union’s resistance reaches into ICE ranks. ICE officials say many field agents have been drawn to the professional appeal of the high-profile anticrime operations against foreign street gangs, drug dealers and sex offenders that the agency is conducting ever more frequently.

“Our folks understand that we have limited resources and we have to focus more than ever on our priorities,” said Chris Shanahan, the ICE field office director who oversees deportation operations in New York City, where all supervisors have had the training.

“What I see from my officers,” Mr. Shanahan said, “is that they understand that criminal aliens and national security threats should be taken into custody and removed before a single mother, a pregnant woman or someone with small United States citizen children.”