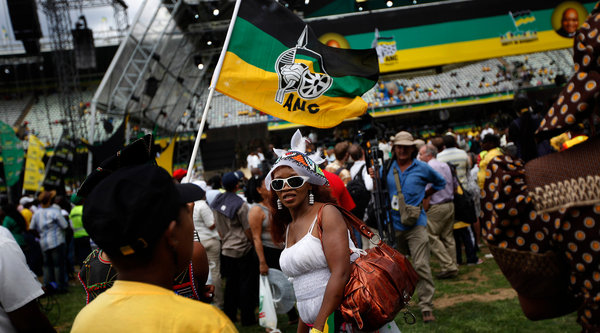 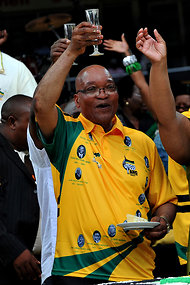 With its elder statesman, Nelson Mandela, 93, too frail to attend, its leadership splintered into feuding factions that threaten its ability to govern, and deep disillusionment among its supporters, Africa’s oldest and most successful liberation movement sought to reconnect to its history, rooted in its struggle against white minority rule.

Tens of thousands of party supporters streamed into a 45,000-seat soccer stadium on Sunday, singing and dancing under a blazing sun in the central South African city of Bloemfontein, where the forerunner of the A.N.C. was founded in a Methodist church a century ago.

The movement went on to wage one of the great liberation battles of the 20th century, an armed campaign to overthrow the racist apartheid government and gain civil rights for the black majority.

But after winning South Africa’s first multiracial democratic elections in 1994, the African National Congress faced impossibly high expectations. People long denied access to jobs, education, political power and dignity hoped to reap the rewards of self-rule quickly, and the party has struggled to deliver on its lofty promises.

Today, more than a third of South Africans are unemployed, and the jobless rate for youths is nearly 70 percent. The education system is in crisis. Land and natural resources remain concentrated in the hands of wealthy whites.

While a handful of black entrepreneurs have enjoyed great economic success, the growing wealth of people associated with the party has led to accusations of corruption, tarnishing its moral standing.

“The A.N.C. has become a gravy train,” said Moeletsi Mbeki, deputy chairman of the South African Institute of International Affairs, adding that the party was attracting people who want to get rich, not better the nation.

Some of the party’s internal divisions are ideological, but most are battles over the spoils of power and patronage, said Ebrahim Fakir, an analyst with the Electoral Institute for the Sustainability of Democracy in Africa.

“Where the state has become the only route to accumulation, then the contestation for high office is very intense and becomes incredibly competitive,” Mr. Fakir said. “All the stakes are in politics and nowhere else.”

The biggest such battle will come to a head in December, when party delegates return to Bloemfontein to elect their leaders. Given the A.N.C.’s electoral dominance, its leader usually becomes the country’s president.

The main issue is whether President Jacob Zuma, who has been criticized by opponents for what they say is indecisiveness and a lack of direction, should get a second term.

Mr. Zuma, 69, faces a sharp challenge from a faction that includes Julius Malema, the populist and controversial leader of the A.N.C. Youth League. The faction has called for bolder redistribution of wealth, including mines and land, although some analysts say that debate, too, comes down to a battle over power and its personal rewards.

In recent weeks, the faction has mocked the president at party events, singing, “The shower man is giving us problems,” a reference to Mr. Zuma’s admission several years ago that he took a shower to prevent infection after having unprotected sex with an H.I.V.-positive woman.

Party insiders and political analysts worry that the split could paralyze the government, deepen social problems and erode democratic institutions.

“The A.N.C. can’t govern itself at the moment,” said Chris Vick, a former A.N.C. government adviser. “If it can’t manage itself internally, it’s increasingly going to lose its ability to manage South Africa.”

In many respects, the lives of most South Africans have improved since the African National Congress came to power in 1994. Only about half of South African households had access to electricity then, compared with nearly three-quarters in 2010. Access to clean drinking water increased to nearly 94 percent of households, from 61.7 percent. The economy has boomed, though it has slowed lately along with the rest of the world’s.

The A.N.C. continues to win huge majorities, receiving more than 11 million votes in the 2009 election, a million more than in the previous election.

“The A.N.C. is as strong as ever,” Gwede Mantashe, the party’s secretary general, said in an interview.

Party officials acknowledge that corruption is a major issue, and have sought to reconnect its image with the legendary figures of the A.N.C.’s past, like Mr. Mandela, Walter Sisulu and Oliver Tambo, national folk heroes who endured decades of imprisonment and exile to win freedom for South Africa. Many of those at the festivities in Bloemfontein wore T-shirts celebrating “100 Years of Selfless Struggle.”

Mr. Mantashe said the party had recognized its problems. “The fact that we’ve realized it is a good step for us because we can actually confront it,” he said. With several high-profile prosecutions, including the ouster of two cabinet members last year, the suspension of corrupt members and an education campaign, he added, the party is winning the battle against corruption.

But the taint of graft has taken a toll, and some former party stalwarts have become disillusioned.

Mike Mohlala, 51, a former A.N.C. leader from Graskop who has been an active party member since the 1970s, said he was frustrated by the party’s inability to deliver basic services. Mr. Mohlala lives in a dusty, wooden shack in a squatters’ camp on the fly-infested outskirts of the town, but his discontent goes beyond his personal misfortune. His anger with the party peaked last May when it tried to install local A.N.C. leaders who he said were not properly elected.

Mr. Mohlala did something he said he never would have imagined: he joined the main opposition party, the Democratic Alliance, and helped it win local elections last fall, giving it control of Graskop, an A.N.C. stronghold, for the first time.

“I’ve been fighting for the people to have services, and I’m still going to fight, but not in the way that I fought for the A.N.C.,” he said. “What I’ve seen is that they are just using me to work for them, but at the end of the day they are benefiting and I’m also not benefiting as a person.”

Many members of the post-apartheid black middle class, a crucial segment of the party’s supporters, have also been turned off and have withdrawn from politics.

“There is this growth of the depoliticized black middle class that really believes that the A.N.C. is a corrupt organization, full of incompetent people,” said Chris Malikane, the head of policy for the Congress of South African Trade Unions, a member of the A.N.C. alliance.

The government has become acutely sensitive to criticism, according to some analysts, who say that they worry that it may use its power to squelch dissent.

A bill passed by Parliament in November could send people to prison for 25 years for revealing information that any government agency deemed classified, a measure the news media and special-interest organizations fear could be easily misused. A proposed government tribunal to adjudicate complaints against the news media has elicited fear among journalists that it could be used to muzzle them.

Still, such discord was not evident on Sunday in Bloemfontein.

In a show of unity, former President Thabo Mbeki passed a ceremonial centennial torch to Mr. Zuma, his onetime protégé who later turned against him, costing him his presidency.

As the party ended, the dignitaries sipped Champagne and nibbled on slices of a six-foot wide birthday cake, frosted in the African National Congress’s colors of black, yellow and green.