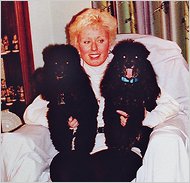 Catherine Greig, who was arrested Thursday with Mr. Bulger in Santa Monica, Calif., with her poodles.

James “Whitey” Bulger
Tracing the path of a fugitive. 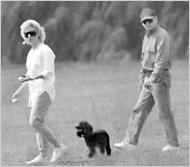 Catherine Greig and James (Whitey) Bulger in a frame from a surveillance tape.

Mr. McGonagle had been wounded in a gunfight in 1969. One of his brothers was killed that same year, and another in 1974. Mr. McGonagle blamed one man — James (Whitey) Bulger — a member of a rival gang.

Mr. McGonagle and Ms. Greig were divorced within a few years, and she became involved with Mr. Bulger, who is more than 20 years her senior.

Mr. Bulger became one of the country’s most notorious mobsters, and Ms. Greig stuck with him, though he continued to live with another woman. But in 1995, as the law closed in on him, Mr. Bulger and Ms. Greig began a 16-year odyssey together on the lam.

That odyssey ended Wednesday when the F.B.I. arrested the couple in Santa Monica, Calif.; on Friday they appeared in a Boston courtroom. Mr. Bulger, now 81, is charged with 19 murders, extortion, money laundering and other crimes; if convicted, he faces life in prison or the death penalty. Ms. Greig, now 60, is charged with harboring a fugitive and faces five years in prison.

Mr. Bulger appeared confident in court, even jocular. Ms. Greig, by contrast, seemed timid, drawn and older than her years. She looked uncertainly to her court-appointed lawyer before answering questions. But she did have a smile for her twin sister, Margaret McCusker, who sat in front in the crowded courtroom.

Ms. Greig has been a supporting character in the long-running Bulger crime drama, overshadowed by her larger-than-life companion and always dutifully subordinate, acquaintances said. “When he called out to her, she acted as if he did this wonderful thing and God had called to her,” said Janus Goodwin, who knew her in Santa Monica as Carol Gasko.

Those who have been following the case for years say they still know little about Ms. Greig.

“No one really knows the dynamic of the relationship,” said Dick Lehr, a co-author with Gerard O’Neill of a 2001 book, “Black Mass: The True Story of an Unholy Alliance Between the F.B.I. and the Irish Mob.” “But he is a master of the double cross, both in his personal life and his professional life.”

Ms. Greig was born in 1951. Her father was a machinist from Glasgow, and her mother came from Canada. She grew up in South Boston, a tough, working-class neighborhood. After marrying Mr. McGonagle, who lived a block away, she got her dental hygienist license in 1972 (it expired in 1987).

When she met Mr. Bulger years later, he was already leading a double life as a gangster and an informer for the Federal Bureau of Investigation. With Ms. Greig he embarked on another double life, living with her in one house while sharing another home with Theresa Stanley, whom he met in the late 1960s when she was 25 and a single mother with four children. He and Ms. Stanley would live together for about 20 years.

Ms. Stanley learned only in 1994 “that throughout most or all of the time she had been Bulger’s girlfriend, Bulger had also been romantically involved with Greig,” the F.B.I. said. “This news caused a strain in Stanley’s relationship with Bulger.”

The mobster and Ms. Greig lived in Quincy, a blue-collar Boston suburb, in an apartment that she bought in 1982 for $96,000 in cash.

In 1986, Ms. Greig upgraded to a house on Hillcrest Road, paying $160,000 in cash. She still holds the title, and the tax payments are up to date, according to several news reports, though it is not clear who is making them.

The gray paint on the home is peeling, and a woman who appeared to be in her 20s answered the door on Friday but declined to comment.

Neighbors said that when Ms. Greig lived in the Hillcrest Road house, she was friendly and was often seen walking her toy poodles. She kept them well groomed.

James “Whitey” Bulger
Tracing the path of a fugitive.

She had her teeth cleaned once a month and frequented hair salons, even on the run. In Grand Isle, La., she had her hair dyed (L’Oreal light ash blonde) in a salon that happened to be owned by a police chief’s daughter. She also underwent numerous plastic surgeries, including breast implants, a nose job and a facelift, according to the F.B.I.

Mr. Bulger left Boston for an extended period in 1994 — not with Ms. Greig but with Ms. Stanley. But after crisscrossing the country and traveling abroad, Ms. Stanley tired of life on the run. “Stanley was bored with sightseeing and tired of being alone with the aloof Bulger and his long silences,” according to the “Black Mass” book. “In the last couple of weeks Stanley had hesitated to even ask simple questions like, where are we going now? It would only start an argument.”

In 1995, a friend in the F.B.I. tipped him off that he was about to be charged in a major racketeering indictment. He drove back to Boston with Ms. Stanley and dumped her off in a parking lot, according to “Black Mass.” “Bulger said, ‘I’ll call you,’ as he roared off forever. She never heard from him again.”

A short time later he picked up Ms. Grieg, and they disappeared into rural America, leaving Ms. Greig’s poodles behind. They stayed in cheap motels, sometimes renting apartments and always using aliases.

They paid cash for everything, with Mr. Bulger dispensing crisp $100 bills. Ms. Greig kept dog biscuits in the trunk of their vehicle and befriended dogs and their owners.

Most people along the way thought the couple was friendly and generous, but they noticed Mr. Bulger’s hair-trigger temper and sometimes disparaging treatment of women.

“He thought women should be seen and not heard,” Thomas Rudolph, who knew them in Grand Isle, La., told The Boston Globe in 1998. He added that Mr. Bulger had boasted that all he had to do was clap his hands and Ms. Greig would jump.

On Friday in Santa Monica, several neighbors agreed that Ms. Greig was always impeccably dressed with manicured nails. Recently she had let her platinum hair turn to a shock of white, though it was still coiffed.

Ms. Greig occasionally invited Ms. Goodwin, her neighbor, inside her modest apartment, but they never talked about deeply personal matters, until Ms. Greig confided that her husband seemed to be suffering from dementia. Because Ms. Goodwin had a mentally ill son, she tried to offer Ms. Greig some support, but she did not get very far.