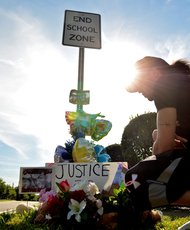 A makeshift memorial in the area of Sanford, Fla., where Trayvon Martin was shot to death.

In order to view this feature, you must download the latest version of flash player here. 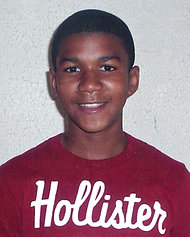 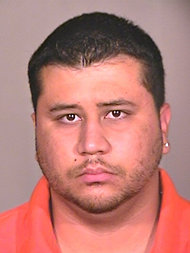 Mr. Zimmerman was on neighborhood watch three weeks ago when he fatally shot Trayvon.

The law, called Stand Your Ground, is one of 21 such laws around the country, many of them passed within the last few years. In Florida, it was pushed heavily by the National Rifle Association but opposed vigorously by law enforcement.

It gives the benefit of the doubt to a person who claims self-defense, regardless of whether the killing takes place on a street, in a car or in a bar — not just in one’s home, the standard cited in more restrictive laws. In Florida, if people feel they are in imminent danger from being killed or badly injured, they do not have to retreat, even if it would seem reasonable to do so. They have the right to “stand their ground” and protect themselves.

That is precisely the question in the case: Was the gunman, George Zimmerman, 28, a white Hispanic crime watch volunteer in Sanford, Fla., in imminent danger and acting in self-defense during his encounter with Trayvon Martin, as he asserts?

In the three weeks since Trayvon, 17, a well-liked high school student from Miami with no criminal record, was killed, public protests have grown larger and louder, and so have calls for Mr. Zimmerman’s arrest. The Police Department in Sanford, near Orlando, said that under the law, it had no call to bring charges.

But late Monday, the Department of Justice said it had opened an inquiry into the shooting. It will run parallel with one announced on Tuesday by the state attorney in Seminole County, who said a grand jury would be convened. State attorneys use grand juries in cases when they cannot make a clear independent call, or when a case is explosive.

In recent days, Trayvon’s parents, Tracy Martin and Sybrina Fulton, have issued pleas for law enforcement to take action, and social media campaigns, chiefly on the Web site change.org., have pushed for the justice system to act. Celebrities like Spike Lee and John Legend have joined the effort.

The Rev. Al Sharpton, who is coming to Sanford for a rally this week, said he was planning to raise awareness on the law, which he said encourages vigilante justice.

“People can’t take the law in their own hands,” he said.

On Tuesday evening in Sanford, hundreds gathered along the wooden pews and red carpeted floors of the Allen Chapel A.M.E. Church as community leaders and residents gave testimonials of police harassment and listened to N.A.A.C.P. officials criticize the law. The spirited crowd called for the arrest of Mr. Zimmerman and the ouster of Sanford’s police chief.

“The line has been drawn in the sand,” said Turner Clayton, head of the Seminole County N.A.A.C.P. office.

The lawyer for Trayvon’s parents, Benjamin Crump, said at a news conference on Tuesday that Trayvon was speaking to his girlfriend on his cellphone minutes before he was shot, telling her that a man was following him as he walked home.

Trayvon told his girlfriend he was being confronted, Mr. Crump said. She told him to run, and he said he would “walk fast.” Trayvon was headed to the home of his father’s girlfriend after a visit to a convenience store, carrying Skittles and a can of iced tea.

Trayvon asked, “Why are you following me?” Mr. Crump said. The girl then heard a faraway voice ask, “What are you doing around here?” Mr. Crump added. Then Trayvon’s voice falls away.

“She completely blows Zimmerman’s self-defense claim out of the water,” Mr. Crump said.

Mr. Zimmerman had reported a “suspicious” person to 911 shortly before the encounter, saying a black male was checking out the houses and staring at him. Mr. Zimmerman, a criminal justice major, often patrolled the neighborhood. He had placed 46 calls to 911 in 14 months, for reports including open windows and suspicious persons.

In the 911 call, Mr. Zimmerman, using an expletive and speaking of Trayvon, said they “always get away.” The 911 dispatcher told him not to get out of the car and said the police were on their way. Mr. Zimmerman was already outside. A dispute began. Mr. Zimmerman told the police that Trayvon attacked him and that he fired in self-defense.

Trayvon’s parents say they are sure they can hear Trayvon pleading for his life on the 911 tapes. Several witnesses who heard the encounter agree it was Trayvon who was screaming. But Mr. Zimmerman told the police that was his voice.

The police said they have found no evidence to dispute Mr. Zimmerman’s claim of self-defense. Without that, the Stand Your Ground law makes it hard to make an arrest, and for prosecutors to charge and bring to trial. The state attorney is now in charge of the case and is being assisted by the Florida Department of Law Enforcement.

Gov. Rick Scott, asked about the law at a press gathering on Tuesday, said that he did not think the law was unfair but that it merited a close look.

“Any time we see something like that we have to review and make sure we’re not giving people the opportunity to use the law unfairly,” he said. “You want to do everything you can to make sure this doesn’t happen again.”

Florida prosecutors say the number of defendants who claim self-defense — even when it should not apply — has jumped noticeably since the law was passed in 2005. It has been used judiciously and fairly in many cases, where it was clearly self-defense. Other cases have left prosecutors scratching their heads. The law also prevents a person shooting in self-defense from being sued.

“Self-defense is now used more widely than it was under the old law,” said William Eddins, Pensacola’s state attorney and president of the Florida Prosecuting Attorneys Association. “It is a very broad law in terms of the availability of the defendant to try to take advantage of this law. It has created more litigation for the state in cases involving violence and in murder cases, in particular.”

The state attorney in Tallahassee, Willie Meggs, who fought the law when it was proposed, said: “The consequences of the law have been devastating around the state. It’s almost insane what we are having to deal with.”

It is increasingly used by gang members fighting gang members, drug dealers battling drug dealers and people involved in road rage encounters. Confrontations at a bar are also common: someone looks at someone the wrong way or bothers someone’s girlfriend.

Under the old law, a person being threatened with a gun or a knife had a duty to try to get away from the situation, if possible. Now that person has a right to grab a gun (or knife, or ice pick, as happened in one case) and use it, without an attempt to retreat.

Mr. Meggs said he lost a case on appeal that was clearly not a self-defense shooting. The attacker, who was in a car, could have driven away. The victim was unarmed but had angered the attacker earlier in the night, and then he had leaned into the car.

It happens with rival gangs, too. “It puts us in a posture that, if you and I had words, and I said get your gun and I will meet you on the street, we can have a shootout in the street and the winner is standing his ground,” Mr. Meggs said.

Investigating the cases, prosecutors say, is time-consuming. “You have to be very careful and very thorough,” Mr. Eddins said.

Unless there are good witnesses and clear-cut physical evidence, the self-defense homicide cases are often murky and hard to sort out, prosecutors say. The gunman’s side of the story usually prevails because the victim is not alive to challenge the claim. So rather than let a jury decide a self-defense case, which is mostly what happened under the old law, prosecutors sometimes must drop the case.

“The person who is alive always says, ‘I was in fear that he was going to hurt me,’ ” Mr. Meggs said. “And the other person would say, ‘I wasn’t going to hurt anyone.’ But he is dead. That is the problem they are wrestling with in Sanford.”

In Florida, the situation is particularly explosive because of the state’s expansive gun-rights laws. Most people in the state who are not felons can buy guns in Florida, and a relatively large percentage do, with some choosing to keep them in their cars. The National Conference of State Legislatures has found laws in nearly every state that allow the use of deadly force, to a greater or lesser degree, in self-defense, and in defense of property and premises.

“This wave of laws started back in the 1980s,” said Jon Kuhl, a spokesman for the organization. Laws like Florida’s, which give broad license to use deadly force and to claim self-defense, in many cases beyond the home, are a more recent phenomenon, he said. Some of the more lenient ones are in Southern states.

Dan Gross, the president of the Brady Campaign to Prevent Gun Violence, says that his organization tracks laws in 21 states that extend the self-defense doctrine beyond the home. The usual label for such laws — “stand your ground” — is politically charged, he said, suggesting that a more apt label would be “Shoot first, ask questions later.”

Laws like the one in Florida allow situations like the Trayvon Martin killing, he said. “We’re heartbroken, but we’re not surprised.”

Reporting was contributed by Jennifer Preston, John Schwartz and Timothy Williams from New York, and by Joseph Freeman from Sanford, Fla.