Identity on a Divided Island 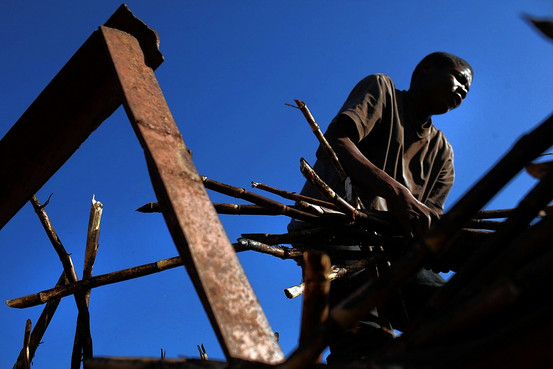 A worker loads sugar cane at a plantation in San Pedro, Dominican Republic, where sugar cane workers are mostly Haitian, or of Haitian descent.

BATEY GEORGE, Dominican Republic—José Luis Santo, having just turned 18, planned to vote in this country's presidential election on Sunday. But when he went to the local registrar's office, he says he was denied a voting card on the grounds that his mother, who is Haitian, was never a Dominican citizen—and so neither was he.

The case of Mr. Santo, who says he was born in the Dominican Republic and therefore is a citizen, is one of many involving Dominicans born to Haitian parents who are being denied proof of citizenship ahead of the vote. Some say they have also been refused voting cards or copies of birth certificates, papers needed to get other vital documents such as driver's licenses and passports.

The citizenship dispute is part of a protracted clash between the two countries that not only share an island but also a history of tension. Haitians have long operated as an underclass in the Dominican Republic, in jobs ranging from highway construction to the cutting of sugar cane. Advocates say that many here wish to strip them of their nationality, too, pushing them deeper into the shadows.

Here in Batey George, a shantytown set up for sugar-cane farmers, many of whose parents came generations ago from Haiti, some fear deportation to a country where they have never lived and whose language, Haitian Creole, they often don't speak.

"This is a human drama, as without a nationality, these persons have few or no human rights," says Gonzalo Vargas Llosa who heads the United Nations High Commissioner for Refugees office based in the Dominican Republic.

Mr. Vargas Llosa says nonprofit groups have documented roughly 2,500 Dominicans of Haitian descent who are caught in such a nationality limbo, though the actual figures could be much higher. Those people could apply as Haitians to be nationalized, but Mr. Vargas Llosa says their prospects at success are uncertain.

The Dominican government, in a statement sent through its U.S. Embassy, says the efforts aren't targeting anyone in particular but are merely meant to clean voter registries. It cited "a range of unlawful and potentially dangerous situations" concerning the voter lists, from baseball players with false documents to criminals voting under multiple identities. 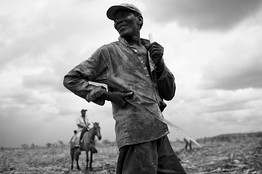 A Haitian sugar cane worker cut cane in a field beside a batey in March in San Pedro, Dominican Republic.

It said the efforts, which had also targeted some Dominicans of Haitian descent, were meant to correct irregularities that had "plagued the country's civil registry." But it said only 61 people have been denied voting cards because they weren't Dominican.

As the vote nears, no major candidate has taken on the issue. Front-runner Danilo Medina, a former chief of staff under departing President Leonel Fernández (who is barred from another term), has worked with hard-line groups that pushed for immigration controls. His opponent, Hipólito Mejía, also oversaw earlier steps to restrict citizenship during a previous presidency in the early 2000s.

The two candidates are ideologically similar, and both have offered vague proposals from improving education to curbing a rise in drug-related crime.

Haiti and the Dominican Republic have long had an uneasy existence. They share the Caribbean island of Hispaniola, cleaved in two by a border that has been bloodied by invasions and massacres. While the two countries are poor and predominantly black, Haiti is far more destitute. For generations, refugees have flooded across the border.

The most recent wave arrived in 2010 when an estimated 15,000 Haitians fled to the Dominican Republic after a magnitude-7.0 earthquake devastated Port-au-Prince and other Haitian cities. The Dominican government offered aid, but ties between the two countries soon frayed again.

Since the 1930s, the Dominican government has granted citizenship to nearly every person born on its side of the island. The few exceptions were children born to diplomats or those in transit in the country, such as tourists. But in 2010, Dominicans adopted a new constitution that limits new citizenship—including votingrights—to those born of two legal Dominican residents, formalizing earlier legal changes and a 2005 Supreme Court decision that ruled that children born to illegal immigrants fell under the "in transit" category.

The Dominican government says that last year, after a number of complaints, it sent directions to registrars' offices to release birth certificates even if a person's legal status is under investigation.

Dominican nationalist groups, part of the ruling coalition, had also pushed for the changes amid chronic unemployment, which still hovers at 14%. The government says the changes aren't applied retroactively and don't affect those who already have citizenship.

On a recent visit to two poor villages, more than a dozen people said local officials have held back basic documents, especially birth certificates—which in the Dominican Republic are the basis for getting all other official documents, such as driver's licenses. All said they were born in the country to Haitians who arrived without documents, or had Haitian last names.

Bernelie Meme, a 25-year-old illegal immigrant who fled Haiti four years ago, says she was unable to get a hospital to treat her while she went into labor in 2010 because she didn't have documents. Instead, she says, she gave birth in a gas station. Her daughter is now two years old. Ms. Meme says she has been unable to get her a birth certificate.

Some advocates remain doubtful that much will change soon. Mario Jacobs, an attorney who has taken on numerous cases of people being denied documents, says the country has long sought to perpetuate the Haitian-Dominican underclass. "It's a pattern of behavior that will continue," he says.

Yonny Cherany, 16, says when he was unable to produce a birth certificate for his Haitian-born mother this year officials wouldn't give him an identification card or copies of his own birth certificate. "Without an ID card, my problems will increase throughout adulthood," he says, adding he would be unable to drive legally.

Write to Nicholas Casey at nicholas.casey@wsj.com