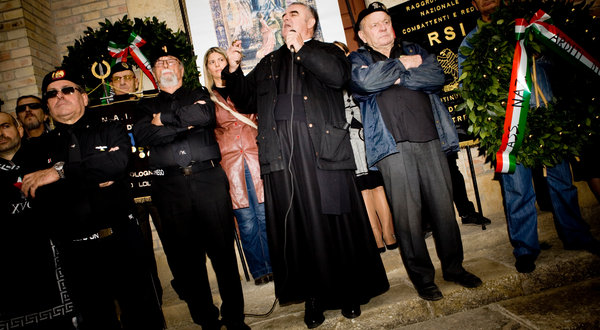 Giulio Tam, a priest with the Society of St. Pius X, a traditionalist Catholic sect that broke with the Vatican 20 years ago, recited the rosary at the tomb of former Fascist dictator Benito Mussolini in Predappio, Italy. More Photos »

A bust of Mussolini in the garden of Villa Carpena, the house where the Fascist dictator once lived, now a museum. More Photos »

“Why, why do you come here, who is this man Mussolini?” asked the celebrant, Giulio Tam, a traditionalist Catholic priest.

“We come to thank this man for the most European, most Mediterranean, most original of ideas,” answered Father Tam, a familiar figure in right-wing circles, before he began reciting the rosary.

So it goes in Predappio, three times a year, to commemorate the day of Mussolini’s birth (on July 29, 1883, in a house not far from the cemetery), his death (at the hands of partisans on April, 28, 1945) and the so-called March on Rome, which brought Mussolini’s party to power in Italy in October 1922.

“I’ve been coming here, at least once or twice a year, since Aug. 31, 1957, the day they brought the corpse of the Duce here,” said Marcello, a personable 85-year-old veteran who asked that his last name not be used. “My faith in him has remained intact.”

They came in busloads, from Turin to Palermo, on a pilgrimage of sorts.

“Like Christians going to St. Peter’s, except that here some wear a fez,” said Gianni, a man from Turin, of the black felt hat in the shape of a truncated cone that became part of the uniform of the Fascist black shirts worn here by a handful of meticulously groomed young men. “But we’re not anachronistic; we have credit cards. We don’t want to restore that era, we just don’t want to deny it either.”

Still others came to signify an epoch in which they believe that Italy, in contrast to today, counted for something in the world. “Italy needs a distinct change, we’re in the hands of politicians who are unworthy to have been voted,” said Enrico Cozzani, the owner of a security firm based in Lucca. “We’re the laughingstock of Europe.”

Angelo Aquilani, the Florence-based coordinator for central Italy of the Nuova Destra Sociale, a right-wing group, was more succinct. “We love the Duce,” he said. “He is our faith.”

Such veneration weighed on Italy’s leaders in 1945. After Mussolini was killed, a decision was made to obscure his grave site, much the way military officials in the Transitional National Council of Libya chose to bury Col. Muammar el-Qaddafi in a secret location last month and American commandos buried Osama bin Laden at sea in May, to avoid creating a shrine for their supporters.

After Mussolini’s corpse was hung up on meat hooks on April 29, 1945, in Piazzale Loreto in Milan, where citizens vented their fury at their former leader, he was buried in an unmarked grave in a nearby cemetery. A year later, neo-Fascist loyalists dug up his body and hid it in a convent in Lombardy until 1957, when the remains were returned to Mussolini’s widow, who buried them in the family crypt in Predappio.

In fact, Italian authorities’ efforts to hide the burial site backfired on them, as its location rapidly became a matter of intense interest. “The vitality of Mussolini’s afterworld life was great as long as the mausoleum didn’t exist. A corpse that is nowhere is everywhere,” said Sergio Luzzatto, a historian at the University of Turin who wrote “The Body of Il Duce,” about the corpse’s vicissitudes. The documentary “Il Corpo del Duce,” inspired by the book, will be shown at the Turin Film Festival this month.

“Italians lived the absence of the body as a presence, so continuing the love story between Italians and their leader, which was very carnal in many ways,” Mr. Luzzatto said. That story ended when the body was returned to the family and “it became fixed and sepulchral,” primarily in the guest books at the tomb, where visitors can sign and leave comments.

Those books are now archived in a room on the top floor of the House of Memories, the museum of Duce memorabilia opened in 2001 by Domenico Morosini, a successful Lombardy businessman, in what was once a Mussolini summer home. The registers are shelved under a beam inscribed with what Mr. Morosini said was a Mussolini citation: “It is not impossible to govern Italians, merely useless.”

The museum gets between 2,000 and 3,000 people a year and might attract more, but Mr. Morosini has found it hard to advertise. Road signs to the museum “constantly get knocked down by left-wingers,” he said.

On Predappio’s main street, a handful of shops do brisk business in Fascist memorabilia, like the Predappio Tricolore store, which hawks everything from truncheons to Mussolini calendars. The calendars are also distributed through newsstands, “where they sell better than sexy calendars,” said one shop owner, Pierluigi Pompignoli, giving a straight-arm salute to a group of German visitors who replied, “Sieg heil.”

Mussolini’s tomb gets between 80,000 and 100,000 visitors a year, with peaks during the three commemorations, which in recent years have been presided over by Father Tam. On Sunday, during a rosary recital interspersed with commentary, he warned of the imminent Islamic invasion of Europe, accelerated by the events in North Africa this year and abetted by a liberalist political class in Europe and an “Americanized youth” open to heresies like gay marriage.

“Mussolini was right; he’d be crying in his tomb to see that Italy has been reduced to this,” Father Tam said (though gay marriage is in fact illegal in Italy). “We’re proud of the Crusades,” he said, drawing loud cheers and applause from the crowd.

This is just the kind of tourism that Predappio’s center-left mayor, Giorgio Frassineti, would rather avoid.

“We refuse a vision of Predappio of the few, of the people who attend the commemorations, but also of those from the extreme left who want to cancel its history,” Mr. Frassineti said. “These people just keep another kind of tourism at large.”