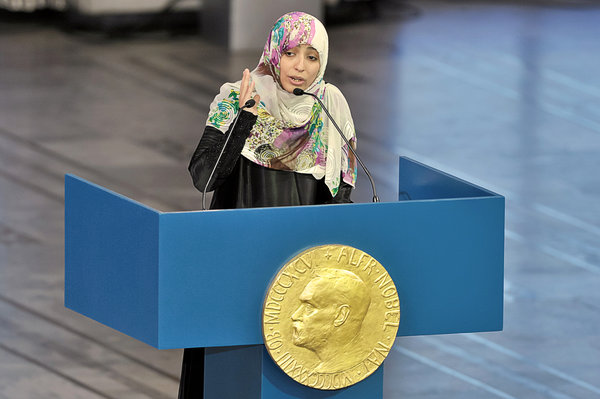 Tawakkol Karman of Yemen, one of three joint winners of the Nobel Peace Prize, gave her speech to the audience during the award ceremony in Oslo.

To spirited applause and at least one ululating cry, diplomas and gold medals were presented to President Ellen Johnson Sirleaf of Liberia, 73; her compatriot Leymah Gbowee, 39, a social worker and a peace activist; and Tawakkol Karman, a Yemeni journalist and a political activist who, at 32, is the youngest Peace Prize laureate and the first Arab woman to receive the award.

“The promising Arab Spring will become a new winter if women are again left out,” said Thorbjorn Jagland, the chairman of the Norwegian Nobel Committee, who presided over the ceremony.

In her address, Mrs. Sirleaf said: “In its selection this year, the Nobel Committee has brought here three women linked by their commitment to change, and by their efforts to promote the rule of law and democracy in societies torn apart by conflict. The fact that we — two women from Liberia — are here today to share a stage with a sister from Yemen speaks to the universality of our struggle.”

Perhaps the most accomplished of the three, Mrs. Sirleaf, in 2005, became the first woman in modern African history to be elected head of state, and she is widely credited with ushering her country into a stable peace after a brutal 14-year civil war. She was re-elected president in November, though that contest was marred by violence and a boycott by the opposition.

Ms. Karman, who for months has lived out of a blue tent in a protest camp in Sana, Yemen, has been deemed “Mother of the Revolution” in her country. In 2005, she founded the advocacy group Women Journalists Without Chains.

She was by turns tearful and fervent in her address, which cited the commandments of the Torah, the Bible and the Koran and called upon Western nations to lend further support to the uprisings in the region.

“The democratic world, which has told us a lot about the virtues of democracy and good governance, should not be indifferent to what is happening in Yemen and Syria, and happened before that in Tunisia, Egypt and Libya, and happens in every Arab and non-Arab country aspiring for freedom,” Ms. Karman said. “All of that is just hard labor during the birth of democracy, which requires support and assistance, not fear and caution.”

Ms. Gbowee is the founder of the Ghana-based Women, Peace and Security Network Africa. She is best known for organizing a “sex strike” in Liberia in 2002, when women withheld sex from their husbands until hostilities ended, and for championing a women’s protest movement the next year.

In a statement announcing the award winners on Oct. 7, the Nobel committee said it hoped the prize would “help to bring an end to the suppression of women that still occurs in many countries.”

Mr. Jagland concluded his remarks on Saturday by citing the American writer James Baldwin, saying: “The people that once walked in darkness are no longer prepared to do so.”